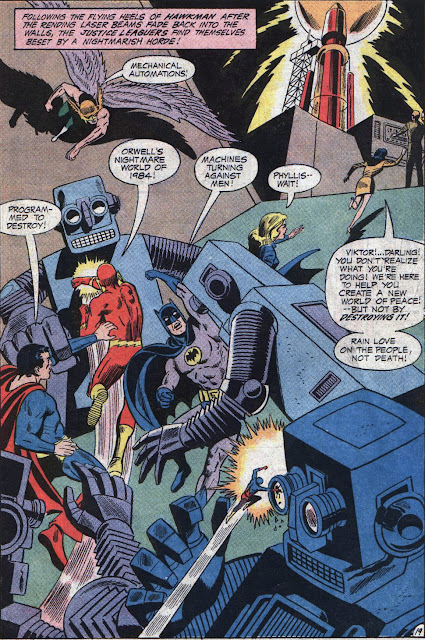 I've read 1984 three or four times. Admittedly, the last time was probably fifteen years ago...but I don't remember any giant robots. I wonder if Superman, Batman, the Atom and Black Canary bugged Flash about this after the battle:

"Uh...sure...I was...speaking in metaphors. Like, um...how in the novel technology runs amok and the country is at war all the time and all the war machines - "

"Barry, the only obvious technology in the book is a two-way television that you can't turn off."

"Stretching it"? Isn't that Reed Richards?

I think you mean Ralph Dibny.

I know you know this, but these guys look like they're ripped off from "Superman Vs. The Mechanical Monsters". For whatever reason, art directors figure we geeks have forgotten about about that film (as if!) and feel free to periodically rip it off. DC Comics, Hayao Miyazaki, Sky Captain, the list goes on.

In any case, Superman handled the giant robot threat by himself before, and he should be able to do it again here.