One day during the golden age of science fiction - that is, somewhere between the ages of 9 and 13 - I chanced upon a copy of Edgar Rice Burroughs' A Princess of Mars at the Leduc public library. 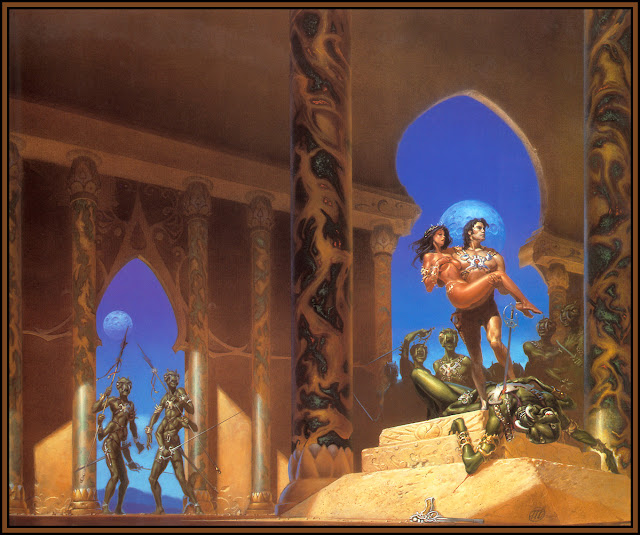 Michael Whelan's cover art, featuring brawny hero John Carter of Virginia standing victoriously over a field of defeated green-skinned Martians with a lovely mostly-naked princess Dejah Thoris of Mars in his arms arrested my preadolescent imagination, and I immediately snatched it up. For once, the story within lived up to the promise of the book's cover. I read all eleven of Burroughs' Mars books as quickly as I could retrieve them from the library, loving the high adventure, the star-crossed romance, the ray guns and swordfights and rescues and diabolical villains and flying ships. Burroughs may not have been the world's greatest prose stylist, but as a pure storyteller he remains one of the greats.

Based on the trailer above, however, I am now cautiously optimistic. The incomparable Dejah Thoris, the first book's titular Princess of Mars, may not be as scantily clad as many purists would hope, but she does seem to radiate the grace, intelligence and power that made her such an appealing character in the books. Similarly, John Carter himself seems a little wiry compared to the muscular brute most readers probably imagined. But acting chops are even more important than physique, so we'll see how it all pans out.

The airships of the trailer - at least, I assume that's what the flying machines are supposed to be - are visually arresting and elegant, but I admit I was hoping for floating galleons, absurd as the concept may be.

I'm most thrilled by the inclusion of Burroughs himself as a character, as he is in the books. I didn't think any filmmaker would incorporate this element of the books, but it seems they have. (In the books, John Carter is Burroughs' uncle, and Burroughs presents the stories as true, related to him by Uncle John.)

It's too bad they didn't title this film A Princess of Mars, after the first book. The film's original title was John Carter of Mars, named for the eleventh and final book, but it looks as though they've eliminated "of Mars," which I find a little annoying. Marketing trumps all.
Posted by Earl J. Woods at 10:42 am

So far I am really looking forward to this, more as just period sci-fi than as a faithful adapatation, as I have only read a couple of the books. And I am a fan of Pixar in genreal and Andrew Stanton in specific.

I do join you in umbrage at the filmmakers dropping "of Mars" from the title, epsecially since they are still using the cool "JCM" icon/logo in the trailer! Stanton is a team player, talking about how Carter has to earn the title 'of Mars' (put the title card at the end then!), but in the meantime I guess the unwashed masses Disney marketers are so fearful of can just make up their own m-word:
John Carter, Masochist?
John Carter, Master's degree?
John Carter, Manicurist?