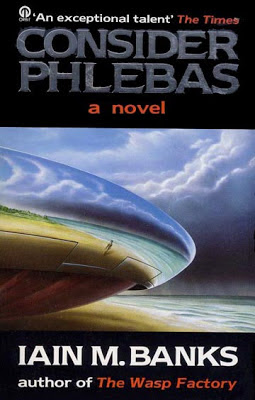 Sometime during my first year of study at the University of Alberta, during one of my regular trips to Greenwoods' on Whyte Avenue, I purchased a copy of Consider Phlebas, by Iain M. Banks. In this novel Banks introduced the Culture, a magnificent post-scarcity utopia comprised of humans and Artificial Intelligences known as Minds. I loved the book, particularly its stunning coda - a dry recitation of statistics showing the cost of the war depicted in the book.

And yet, for whatever reason, I didn't read another Banks novel until picking up Transition a couple of years ago, and only this spring did I read two of Banks' early mainstream novels, The Wasp Factory and The Bridge. All three are thought-provoking, richly textured works, and online reviews tell me that his Culture novels get even better. I have most of them on my bookshelf already, waiting to be savoured. But there is only one more Banks novel to come, to be published just a couple of weeks from now.

Today Banks died, stolen away too soon by cancer, denied the utopia he imagined because we haven't yet built it. During the past few months several great writers of science fiction have passed, but Banks' strikes me as particularly sad because of his relative youth and the vitality of his imagined worlds. In the Culture, Banks could have enjoyed centuries of life in a world of plenty and justice. Instead, living as he did in our imperfect world, he had to create something better, a target for human aspiration.

Banks was no starry-eyed idealist. His works are laced with arch satire and self-awareness; The Wasp Factory in particular is not for the faint of heart. But despite this dark mien, Banks has left us with a hopeful vision of the future that challenges us to work toward something better than the fatally flawed civilization dancing on the edge of catastrophe we endure today.

And who knows? Perhaps a Mind from the distant future or some parallel universe brought into being by the power of Banks' imagination has already breached the barriers of time and space and saved the author's consciousness, ferrying it to some brighter, better place, a world of wonders. I hope so.
Posted by Earl J. Woods at 12:58 pm

We also lost an inspiring author for political thinking: http://www.sciencedirect.com/science/article/pii/S0160791X11000728