The First Place I Lived 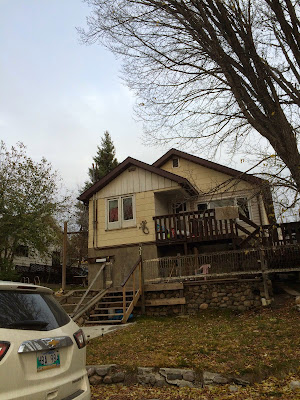 Grandma's funeral service and internment happened today in Cranberry Portage. It was a lovely ceremony held in the school gymnasium where Hope (and Val) worked as cafeteria servers and custodians for a quarter-century, touching who knows how many young lives with kindness. To my eyes it looked like about fifty members of the community turned up in addition to the family members who made the trip - and fifty people is a considerable proportion of Cranberry Portage's population.

It was a hard day, but a warm and well-executed event, which made the process easier to bear.

After we returned to Flin Flon, Mom and Dad took Sean and I on a short drive to see the house where I spent my first couple of years. Unfortunately it sparks no memories for me, though Flin Flon itself remains a strange marvel of the north, with its rolling hills carved into giant rock formations, as well as the iconic smokestack that continues to belch.
Posted by Earl J. Woods at 5:27 pm

You may recall the astounding moment that Tutorbot learned from the ancient Malakarabot (gardening robot) the remedy to heal his soul, that instant was when the Universe chose also to reveal its true nature and caused a random Canada Goose to be sucked into the starboard starboard intake of the flying truck Tutorbot was riding in, whereupon the motor had exploded. The crew ejected safely, but Tutorbot was mangled into an unrecognizable pretzel shape when the truck crashed with powerful violence into a remote automated factory.

After a year of enduring a slow leak in his trickle charger and being unable to do anything about it, for his arms and legs had detached from their mounts by the extreme force of the collision and flung away in pieces towards the visible horizon, Tutorbot came to the conclusion that his rescue may be delayed.

He passed time by refining the checksum of his onboard lesson plan, for he knew someday he would be found, rehabilitated, and ultimately returned to his rightful workplace at the head of a classroom of impressionable student-citizens. He ran his checksum one thousand times a day for two thousand years. At the end of that time, he felt he had developed a truly solid lesson plan.

One day after that, a solitary Gnatbot chanced to crawl across Tutorbot's mortarboard receptor panel. Since Tutorbot's electrophoto-opticans had been smashed into fractions of smithereens in the crash, Tutorbot sensed rather than saw his first visitor in over two millennia.

"I've been saving this story for a special occasion," said Tutorbot, his first vocalization in 730,484.4 days. Or he would have said aloud something like that had his voxbox not centuries ago been shotputted the length of a football field away from what remained of his smashed-pumpkin-shaped head.

"The Emperor of Q'in was reported to have told this tale to his concubines and his children: at the beginning of time, the world had been created on God's command by Sh'ei and Tlehonaa'ei, the two most powerful builders in the firmament, and who were also brother and sister. Back then, the world floated perpetually in a river of crimson rose petals, and Sh'ei and Tlehonaa'ei spent uncounted ages running and playing on their new world.

Eventually, Sh'ei came to live on the light bank of the river, while his sister Tlehonaa'ei preferred the darker bank on the opposite side. Sh'ei decided to visit his sister, so he crossed the world from the luminous bank to the obscured one.

- Beautiful and serene sister, I have come to ask you to join me on my side of the world for a visit.

- Noble and powerful brother, I would love to do as you ask. However, I am needed here on my side of the world. I would have to consult with my lords of the beyond-lands to let them know that I will be leaving them. Please wait here as I attend to them, then we shall go hand in hand. But I must beg of you, worthy brother, do not come looking for me. I will return as soon as I can.

Tlehonaa'ei went into her house, while Sh'ei waited outside. A creator of worlds, Sh'ei was used to constant motion, and so suffered delays with the utmost of impatience. Yet Tlehonaa'ei remained inside for a very long time. Sh'ei opened the door and stepped into the house. He searched the rooms for his sister. Finally, he discovered her on the floor, rotting. She was covered with maggots and worms.

- I told you not to come looking for me, and now you have brought upon me the greatest of shame!
Sh'ei ran outside. The house took the form of a mighty armoured warrior, who threw stones that turned into fierce dragons at Sh'ei. By running as fast as he could, he outpaced this calamity.

Sister Tlehonaa'ei summoned a mighty sea hag, who drew up her salty skirts and tried to drown Sh'ei in them, but he was able to swim to the surface and get away.

At the edge of his own shore, Sh'ei was stopped by the Four Furies, who raised from the river of rose petals a crimson army of a million soldiers. Sh'ei was forced to stand his ground. He unsheathed his sword of a hundred blades and slashed into wave after wave of fighters. The Furies knocked the sword from Sh'ei's hands with blasts of lightning.

Sh'ei ran beneath the towering legs of the Furies, dodging their thunderbolts. Gaining his home shore while the enemies amassed on his sister's border, he used every ounce of strength he possessed to lift the world out of the river. Now that the world was liberated, there was no longer any means to cross from one side of the crimson river to the other, although twice each day - at morning and at night - the world did pass close enough to the river of rose petals that they did reflect in the sky.

Sister Tlehonaa'ei, from her dark side of the river called: - Swift and lucent brother, if you persist in this course of action, each day I shall cause the death of one thousand of your people.

Brother Sh'ei, from his luminous side of the river called: - August and solemn sister, do not be so grave! If you kill a thousand of my people, I shall cause a thousand and five hundred of my women to give birth!

The Emperor would explain to his children and his concubines the meaning of Sh'ei and Tlehonaa'ei. Sh'ei had moved from his domain of light into his sister's world of darkness, where he did not belong. She sought to protect him from dissolution, but Sh'ei's ignorance of matters led him to see more than he could bear. While he lost his innocence of death, he did with his mightiest act cause the world of the dead to be invisible to our eyes. Robots and even Men fear and loathe death, certainly, but at least we are protected from seeing it in its fullest form, and so can go about our daily lives."

The Gnatbot on Tutorbot's mortarboard sat mute. Even if it played at full volume a thousand tubaphone march, Tutorbot would never have heard it anyways, for reasons you likely understand by now. So for all intents, the Gnatbot sat mute. But it did sense the slow leak in Tutorbot's trickle charger, and gently clamped shut the repair valve with its tiny jaws. Then it went for help.

It took fourteen years and at least a dozen score of fascinating adventures for the Gnatbot to travel the eight hundred miles to the nearest working communication station to report to the rescue authorities crashed Tutorbot's whereabouts in the factory wasteland.

Well, Earl, I hope my attempt makes you feel better about what must have been an emotional trip punctuated by the boredom of driving across prairie flatlands. Or maybe not, since I feel I am reading my own feelings into your recent trip, and maybe I've got it wrong.

Either way, I do have something that I know will make you feel cheerful:

It's always good to read another Tutorbot parable, and thanks for the added incentive to visit. I miss Cherry Coke.

Just in case you may have missed it, Tutorbot got set up for these events on your September 30th post. It takes a while to come up with them, so they do get buried in the sands of time.