Since Letterboxd helpfully compiles statistics on its members' screening history, I thought it might be fun to compare my all-time statistics each year, starting with today as a baseline: 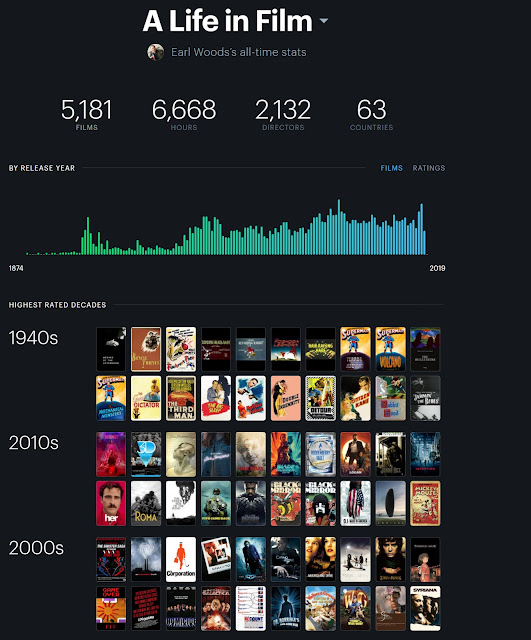 So as of today, I've screened 5,181 films from 2,132 directors produced in 63 nations. The green graph shows how many films I've seen by release year; my current record is 1987, a year from which I've seen 93 films. At the far left end of the scale are the films I've seen from the 1870s and 1880s; these lines, at least from the 1870s and early 1880s, can't get any higher since I've seen all the (very short and very primitive) films released during those decades. There's still room to grow in the 1890s, though; I've seen only 20 percent of the films released in that decade.

My highest rated decades will likely change over time, since my average rating for films in each decade is running pretty close anyway, as seen below: 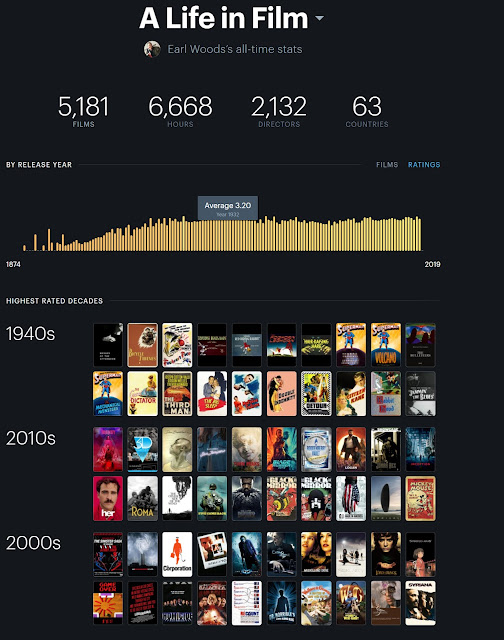 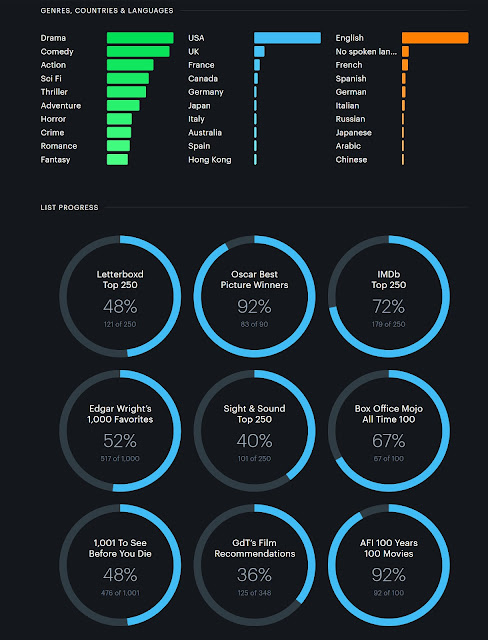 I'm surprised that I haven't seen enough westerns to break into my top ten genre list. Then again, according to Letterboxd I've seen 463 fantasy films, and it's probably true I haven't seen that many westerns.

As might be expected, the vast majority of films I've seen were produced in the United States, with the UK a distant second. This ranking is natural, given the US has been the world powerhouse in filmmaking since the early decades of the 20th century. I'm pleased that Canada ranks fourth, but these results also tell me I need to screen more Indian films.

As might seem obvious, most of the movies I watch are spoken in English, with silent films the distant runner-up. I don't expect this to change.

Letterboxd keeps a few interesting lists running, and it should come as no surprise that I've nearly completed the Oscar Best Picture Winners list. Of most concern to me, though, is the centre list, Sight & Sound's Top 250. Sight & Sound is a renowned British film magazine known for conducting a once-a-decade poll of the world's film professionals, asking them to choose the greatest films of all time. Clearly I've yet to see a lot of the greats. 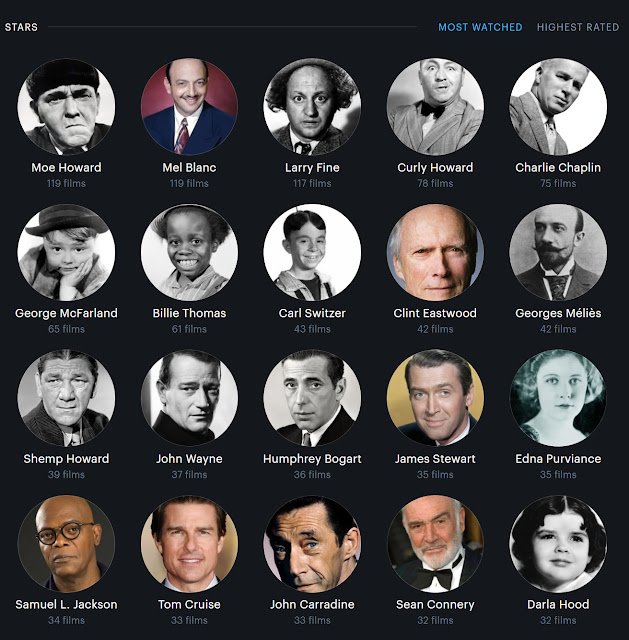 The Three Stooges and the Little Rascals dominate my list of most-watched actors, thanks mostly to my early years. Back in Leaf Rapids, the school ran movies at lunchtime so children didn't have to go out in the freezing cold, and during those years we ran through virtually all of the Three Stooges short films and many of the features. The rest I caught on TV in Leduc in the early 80s. As for The Little Rascals, this, too, was a lunchtime staple during grade four, and I caught the rest, again, on television. Mel Blanc, of course, is the man of 1,000 voices; his high ranking comes from my efforts to see all of the Looney Tunes and Merrie Melodies shorts. Charlie Chaplin ranks highly because I've now seen all of his films; Edna Purviance was often his co-star. And of course, you can see here the usual assortment of big-name stars from both the modern era and the Golden Age of Hollywood. My one regret: the list is dominated by white men. However, this list will likely change a lot each year, because I know that a lot of actors are just on the edge of that 32-film threshold currently occupied by Darla Hood and Sean Connery. It's going to take a long time to dethrone anyone in that top row, though... 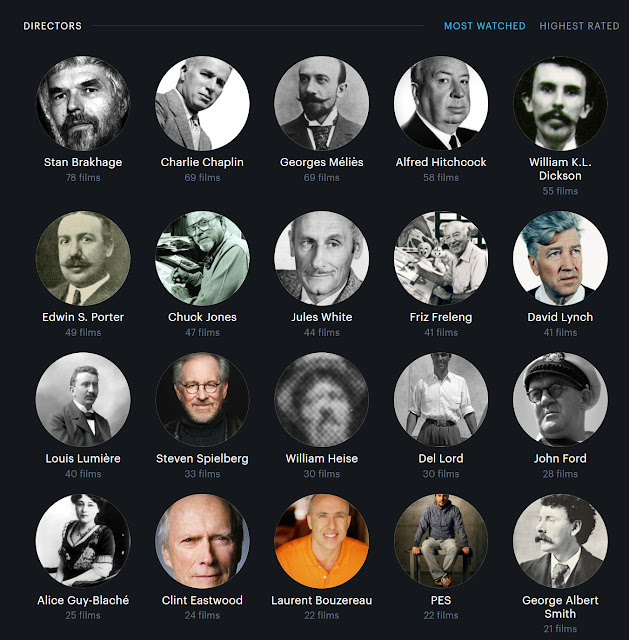 Stan Brakhage earns the top spot not only because he's prolific, but because he directed a lot of shorts that are less than five minutes in length; in fact, some run just seconds long. Chaplin can't rise any higher in this list, since I've now seen all of his films; Melies can, and probably will, pass him. Hitchcock has only a little room left to grow, as I've now seen all but a handful of his output. The same is true of David Lynch and Pes, since I'm mostly caught up on their work. Folks like William K.L. Dickson, Edwin S. Porter, Alice Guy-Blache, George Albert Smith, William Heise and others from the early era of film will probably rise higher as I work my way through films from the 1890s to the 1910s. I've watched nearly everything Spielberg has directed (save the last one or two), but Eastwood still has plenty for me to see, as does John Ford. I imagine Chuck Jones and Friz Freling will also climb higher as I work my way through my Warner Brothers Looney Tunes DVDs and Blu-Rays. 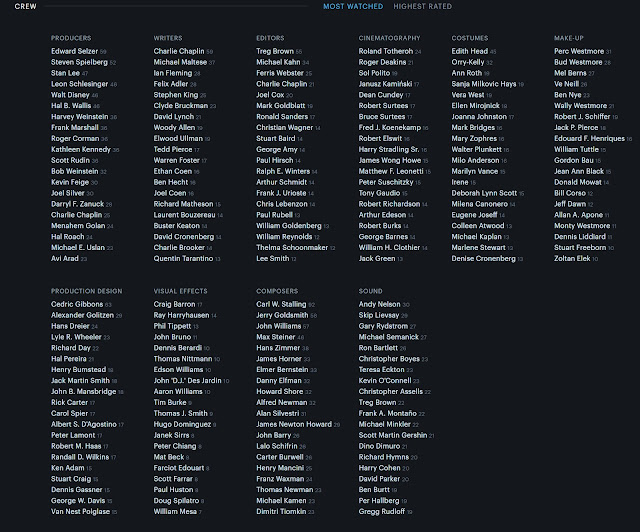 It takes a lot of people to make a movie, and Letterboxd tracks a few important categories. I wish they offered headshots for these folks, too, but it's still interesting to see which producers, writers, editors, composers, etc. have shaped my life in film. 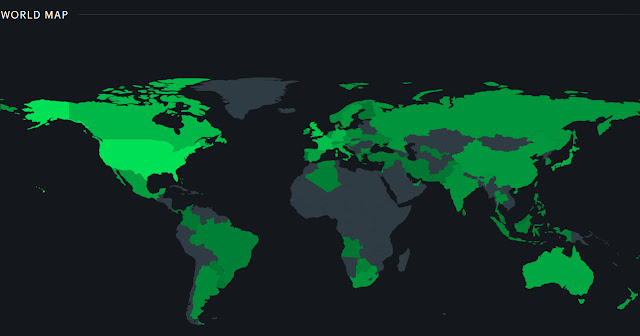 Finally, here are the 63 countries that have produced the films I've seen. Only eight films from South America! Just 13 from Africa! Respectable showings from Oceania (68, almost all from Australia and New Zealand) and Japan (89). Just 12 from China, 10 from Russia, and seven from India! I'm doing all right in Europe, though: 541 from the UK, 283 from France, 130 from Germany, 70 from Italy, 26 from Spain, 16 from Sweden, 11 from Ireland. Oh, and 169 from Canada, but just 19 from Mexico. I've seen 3,728 films produced in the United States, more than all others combined.

Let's check back a year from now to see how these stats have changed. Here's a reminder to myself to hyperlink back to that post when it goes up on January 3, 2020.
Posted by Earl J. Woods at 6:00 am