Let's all go to the lobby to get ourselves a treat...I probably should have gone to the lobby more often this year, as I screened a TON of movies. But looks are deceiving; a lot of the films I watched are shorts...some only seconds long. But they count! 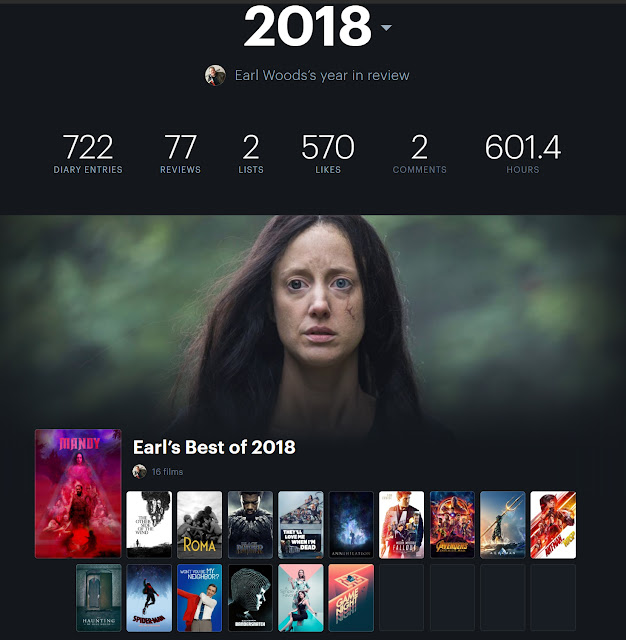 As you can see, I watched 722 movies in 2018, very few of them rewatches. I posted 77 reviews, but most of those are archival and I just wanted to get them up on Letterboxd for a wider audience.

My Best of 2018 will change as I see more movies from that year; this snapshot simply records what I thought of the 2018 films I did see. I suspect that Mandy and The Other Side of the Wind will remain near the top, though; Mandy was simply sumptuous and tragic and mythical, and Orson Welles' long-lost final film is every bit as modern and vibrant and confounding as the best of his miraculous work. 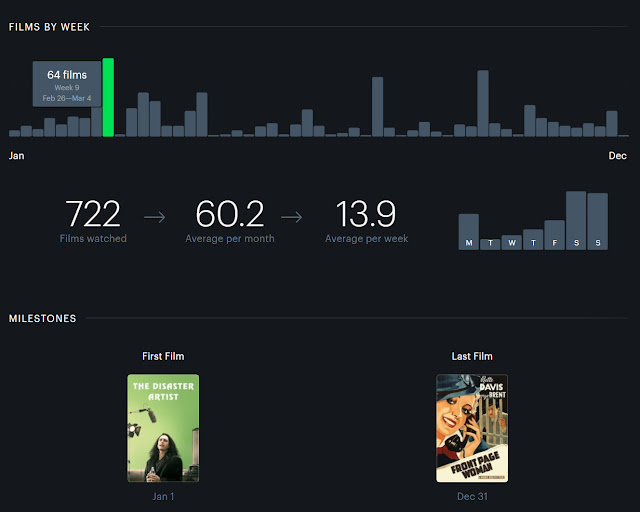 Where did I find time to watch 601.4 hours of film? Well, mainly on the weekends, as you can see here, and with three big spikes of activity, one of which took place immediately after Dad died, a period where I couldn't bring myself to do much of anything but escape from the wider world - a theme for me in 2018. 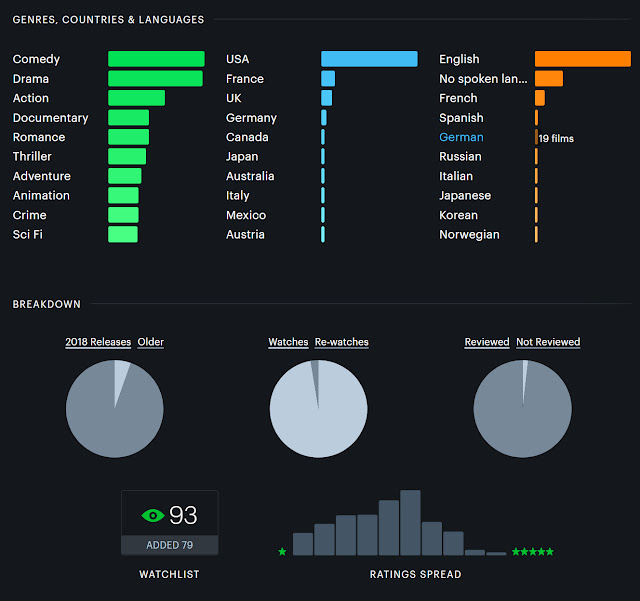 As is usual, most of the movies I watched in 2018 were produced in the USA in English. I'm pretty happy with my genre spread. As for the ratings spread, I tend to consider films based on their overall entertainment value, but even so, I don't hand out many 4.5- or 5-star ratings. 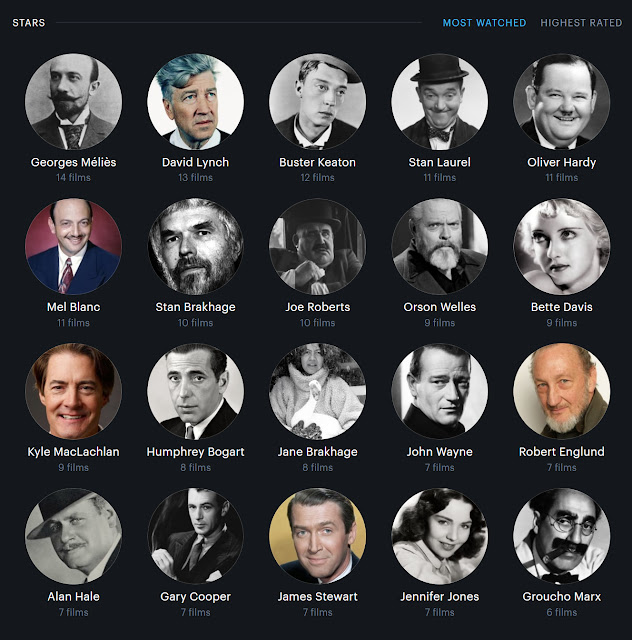 My list of stars in 2018 is weighted heavily to classic actors as witnessed by the presence of Laurel and Hardy, Groucho Marx, Jimmy Stewart, Gary Cooper, John Wayne, Humphrey Bogart, Bette Davis, and the remarkable Jennifer Jones, a new actress to me this year. Robert Englund appears on this list because I watched the entire Nightmare on Elm Street series in a row. The Brakhages appear because I watched dozens of Stan Brakhage experimental shorts. 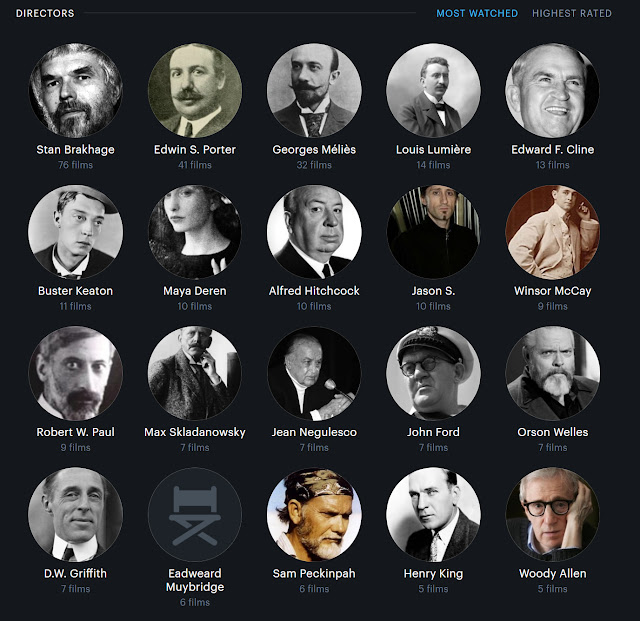 Some of these folks will probably never appear again on my annual list, not because they're not great, but because I've watched almost all their stuff by now. I've seen all of Winsor McCay's work, for example, and I only have a handful of Hitchcock films left to watch; same with Peckinpah and Welles, and I've seen everything by the remarkable Maya Deren, a new and sublime discovery for me in 2018. 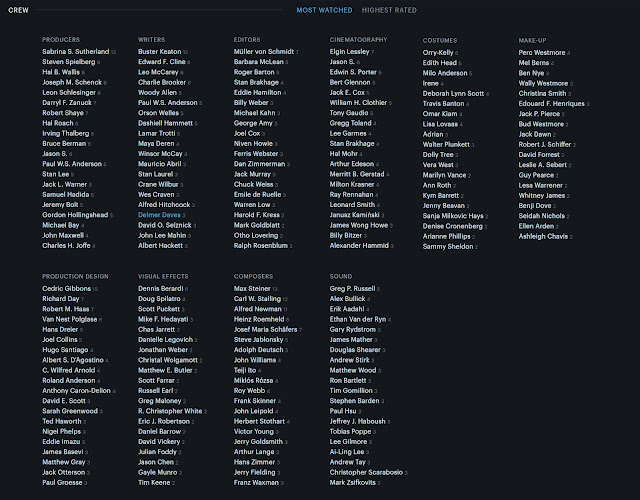 Letterboxd added other important crew to patron stats this year! Very helpful when searching for writers, producers, and composers to follow. 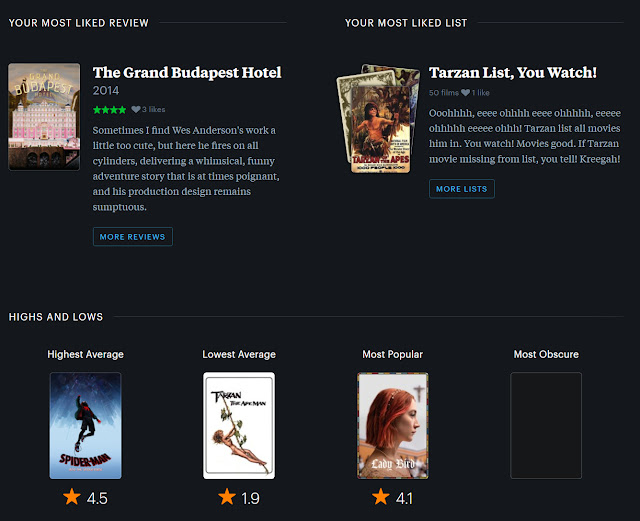 My most liked (such as they are) review and list, along with the Letterboxd community's ratings of the films I saw in 2018. Most Obscure was, for the record, "Proudly We Serve," a propaganda short from 1944. 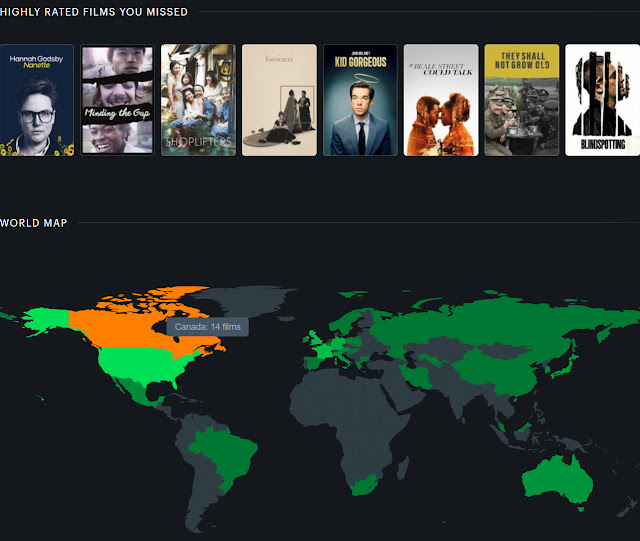 The "highly rated films I missed" and my world map. I believe Uzbekistan and Malaysia were new to me in 2018. I neglected Canadian productions, sadly.

Here's a breakdown of the films I watched by their respective decades of production:

I knocked 61 Best Picture nominees off my list, not including any films I watched in 2018 that may be nominated for that year's award:

This means I've watched 494 of 549 Best Picture nominees, or 89.98%. Less than 100 to go! Oh, and I'm now including the lost nominee The Patriot in my list; I've seen the trailer, which is as much as anyone can see, so I'm calling that counted, or close enough.

As of yesterday, I've screened 5,179 films over the course of my lifetime, or roughly 1,000 films per decade. Is that some kind of accomplishment? I mean, I guess..? It's better than a crippling drug habit, anyway.

The list of films, for the masochistic and the curious: