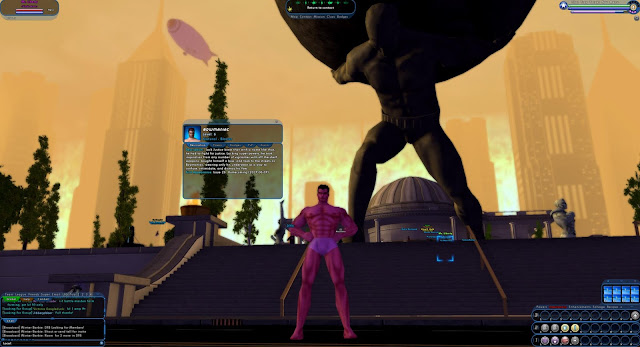 I used to spend five or six hours a week playing City of Heroes, the one and only truly great superhero-themed MMO. I created at least a couple dozen different superheroes, each with different powers, costumes, and backstories. I had a heck of a lot of fun patrolling the city and hanging out with other gamers. City of Heroes remains the only multiplayer experience I've ever really consistently enjoyed.

Sadly, the company that owned the game abandoned it, shutting the servers down several years ago. Like thousands of others, I briefly mourned the loss of a signature amusement and moved on.

But as it turns out, someone released the game's source code into the wild, and just recently a group of volunteers has set up servers to get the game going again. I dove in and recreated one of my favourite characters Bowmaniac, pictured here. If you click the photo to embiggen, you'll see his tongue-in-cheek character profile.
Posted by Earl J. Woods at 7:08 pm