Fantasy RPG Island, Part One: Base 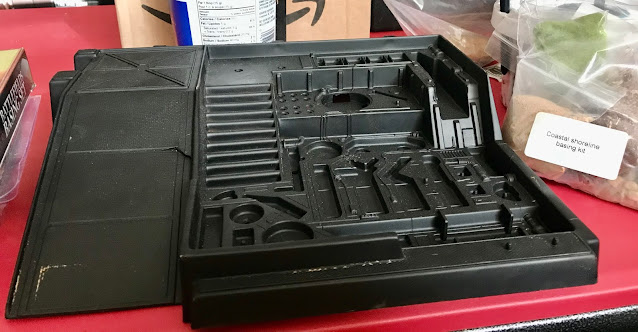 If you grew up with Kenner Star Wars toys, you might recognize this hunk of plastic as the base of Kenner's Droid Factory, released in 1979. Or you may recognize it from the time Sean and I used it to burn Spider-Man alive. In any event, while rooting through my house looking for things to recycle, reuse, or donate, I found the broken remains of the Droid Factory. Rather than recycle it, I decided that it might serve as the foundation for some 28mm-scale terrain for wargaming or roleplaying games.

First, I primed it in black.

Second--and this step is actually still ongoing--I'm conceptualizing what I want this lump of plastic to become. I've decided that I want to transform the Droid Factory into a small tropical island, perhaps with some man-made structures left behind by a dead civilization. I see a sandy beach, some grass, perhaps a water feature comprised of a waterfall and pond. Some palm trees and tropical foliage to fill out the island, and perhaps the entrance to a cavern.

My next step will be to choose which of the Droid Factory's assorted peaks and valleys to shave down or fill in, and which to adapt into natural variations in the terrain. I'll use Green Stuff for that, my first effort with the celebrated modelling clay.

Once I've created the general shape of the island, I'll lay down soil, sand, grass, and other materials to disguise the plastic. I'll start shaping water features, maybe a little pit of quicksand, perhaps a bog, maybe an outcropping of rock, and perhaps some ancient ruins.

Then I'll move on to more ambitious tasks, like the cavern entrance and water features. Finally, the trees.

How's all this going to look? I guess we'll see.