The last movie I watched in an honest-to-goodness theatre was The Rise of Skywalker back in December 2019. Thanks to COVID-19, I haven't stepped foot in a theatre since. And yet I watched (gulp) 2,422 movies in 2020. I may need to go outside more often. 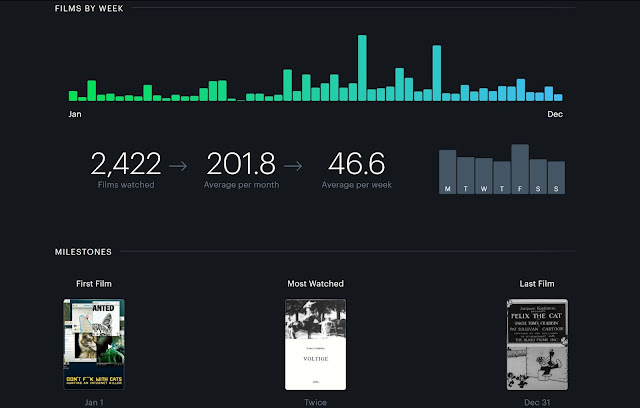 I watched at least one film a week, and usually many more. My only saving grace is, as usual, a lot of them were short films.

I wish Letterboxd had a more granular genre breakdown. They could (and should, I think) add film noir, disaster, monster, suspense, mystery . . . 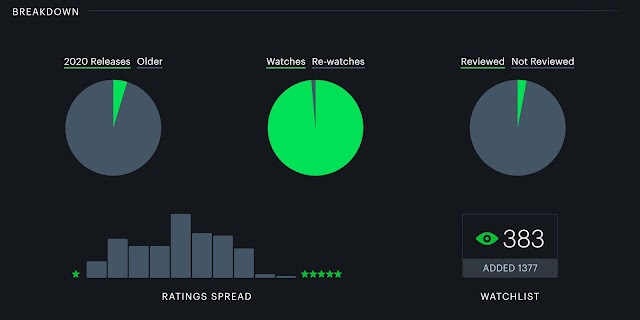 I wrote over 70 reviews this year, but even so that amounts to only a tiny fraction of all I watched. I saw over 100 movies released in 2020 this year, but as I'll describe below, most of my movies this year came from decades past.
And oh, that ever-growing watchlist! Knock off almost 400 movies, add almost 1400. It's my quantum immortality strategy. 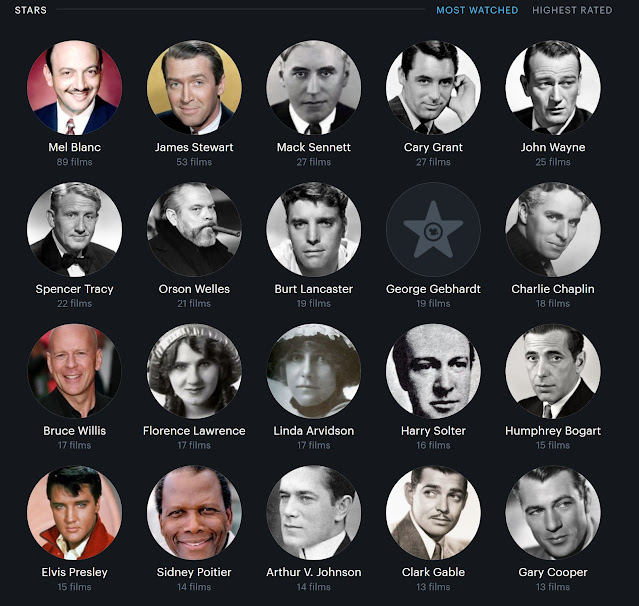 How many of these names do you recognize? Despite that a plurality of films I watched in 2020 were from the 20-teens, nearly all of the folks on this list have long retired from acting or passed away. Mel Blanc tops my most-watched list for the second year in a row because I finally finished my Looney Tunes Golden Collection boxed sets of cartoons. Mel's voice shows up in virtually every one of those dozens of shorts. He'll probably show up this year, too, because I still have three Platinum blu-rays of still more Looney Tunes . . .
James Stewart, Cary Grant, and John Wayne show up in the top five because I'm a fan of these actors and the directors they tended to work with. It's the same story with most of the other familiar faces in this image. Elvis, well, he's there because he was a massive pop culture phenomenon of the 20th century and I felt like I should become familiar with his movies to better understand his appeal. Mack Sennett earned a place in my top five in 2020 because I watched a bunch of Keystone Kops movies. 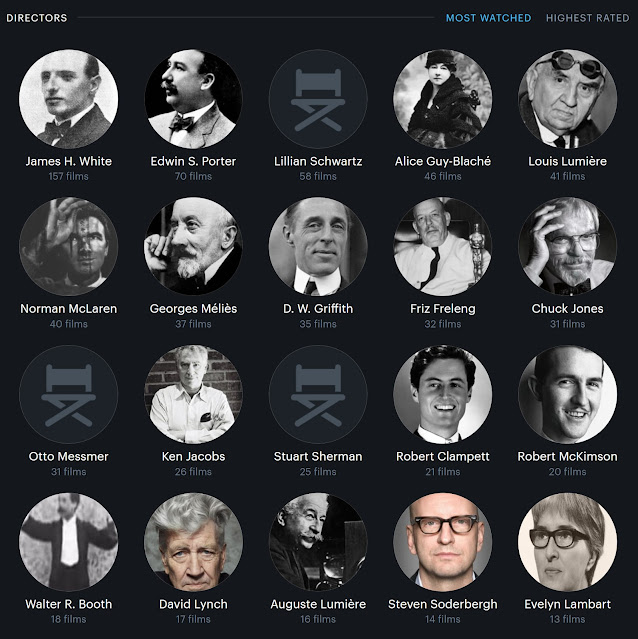 Here are the directors whose work I watched most in 2020. It's dominated by pioneers of early film, directors that worked form the 1880s to the 1920s; I've now seen just over 40% of all the movies mades in the 1890s thanks to most of this work being available on YouTube, Vimeo, and other channels. I've now seen most of the works by Canadian animation genius Norman McLaren; hopefully I'll be able to track down the few works of his I haven't yet been able to find. Friz Freleng, Chuck Jones, Bob Clampett, and Robert McKimson made the list by virtue of those Looney Tunes DVDs. As for Lynch and Soderbergh, I'm hoping to complete their filmographies soon. 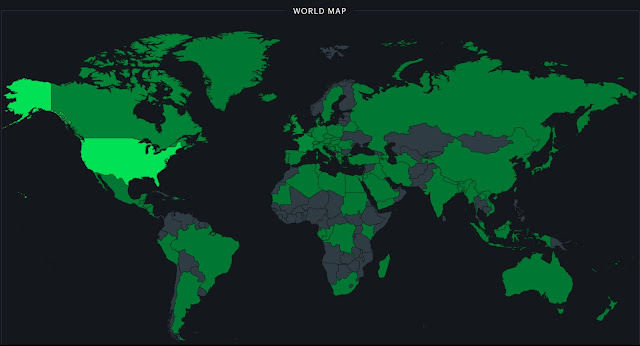 And here's 2020's world map. I added some African nations and some microstates too small to see at this resolution.
Other 2020 Milestones
I have now seen 551 out of 566 Best Picture nominees, or 97.35% of the total. That includes, as I noted late last year, 100% of all the winners. Just 15 nominees left to go, but tracking the last few down is going to be a heck of a task...
The nominees I watched in 2020 were Marriage Story, Little Women (2019), Ford v Ferrari, Jojo Rabbit, Parasite, Joker, 1917, The Godfather Part II, The Godfather Part III, Braveheart, All Quiet on the Western Front, Dances with Wolves, Gigi, The Last Emperor, My Fair Lady, and The Hustler. Of course it's also possible I've seen some nominees for the 2020 awards without knowing they're destined to be nominees, since they won't be announced for a while . . .
Here's the decade-by-decade breakdown of the films I screened in 2020:
2010s: 260
1940s: 230
1900s: 234
1890s: 217
1970s: 212
1930s: 182
1950s: 171
1960s: 167
1980s: 137
2000s: 134
2020s: 114
1910s: 107
1920s: 117
2020s: 114
1870s: 2
1880s: 2
So Much for Quantity, What About Quality?
Since signing up with Letterboxd, I find that my approach to viewing film has become more precise. That is, my viewing now occurs in bursts that follow particular actors, directors, genres, geographies, and decades. For example, late in 2020 I watched over 30 movies starring Jimmy Stewart. It's not just because I love Stewart's work, but through the films he (and his agent) chose, I get a bit of insight into the man, the people he worked with, and the evolution of his craft over time and across different styles and genres. Furthermore, watching films in this way exposes me to new directors, new actors, new composers, and in that way my watchlist continues to expand.
This can lead to many serendipitous outcomes. While following the crime genre, I ran across Deep Cover, a 1992 Laurence Fishburne vehicle about an undercover cop who fights not to lose himself in the shady world of drug dealing. Directed by veteran character actor Bill Duke, who I remember most as the big tough guy Arnold Schwarzenegger has to fight in Commando ("I eat marines for breakfast!"), Deep Cover works not only as a tense, gritty neo-noir suspense thriller, it's also a raw and chilling indictment of US drug and economic policy and the systemic racism that traps people of colour in utterly bleak circumstances. I'd never heard of this film until 2020, and I'm so glad Letterboxd helped me discover it.
Other highlights include Fritz Lang's M; the prototypical biker film, Easy Rider; the shocking, violent, and gut wrenching revenge masterpiece, Oldboy; Wong Kar-wai's tender and obsessive In the Mood for Love; Atom Egoyan's beautiful ode to human connection and empathy, Exotica; the horrifying British nuclear nightmare, Threads; the surreal chase film, Figures in a Landscape; classic Canadian slasher Black Christmas; Orson Welles' haunting, claustrophobic, and insightful The Immortal Story; the unintentionally hilarious Air Force One; the beautiful Humphrey Bogart anti-romance, In a Lonely Place; and the very strange Burt Lancaster backyard odyssey, The Swimmer.
Of the films I watched that were released in 2020, those I enjoyed most include the surprisingly sincere Disney tragedy-exploitation film, Clouds; The Trial of the Chicago 7; Sofia Coppola's On the Rocks; Spike Lee's David Byrne's American Utopia, performed and filmed at the same Broadway theatre where Sylvia and I attended Come From Away; I'm Thinking of Ending Things, with another great screenplay by Charlie Kaufmann; surprisingly decent low-budget SF actioner Archive; Tom Hanks WWII thriller Greyhound; Spike Lee's Da 5 Bloods; the haunting, deliberately-paced, gorgeously shot Last and First Men; well-crafted suspense chiller The Invisible Man; Boss Level, a violent take on Groundhog Day, but one with surprising heart and soul; the scary-as-hell-I-really-have-to-quit-Facebook-now documentary The Social Dilemma; Dick Johnson Is Dead, an honestly heartwarming documentary about mortality and the love between father and daughter; and Wonder Woman 1984, which is getting a drubbing from critics but which I found (barring some problems) entertaining and well-intentioned.
Here's the complete list of all the movies I watched in 2020 in reverse chronological order. My 2020 film reviews, also in reverse chronological order, can be found here.
All in all, a pretty good year for movies in Earl's world. Hopefully I'll be able to get back into a theatre in 2021.