The Day I Sat in the Prime Minister's Chair 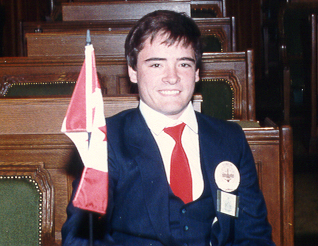 Just before graduating from high school, I was one of a few students from across the country chosen to participate in the Forum for Young Canadians. Thanks to the generosity of my parents and Leduc Composite High School's student council, I was flown to Ottawa to experience how the federal government works. On May 12, 1987, three or four of us split off from the main tour of Parliament. A friendly guard escorted us into the House of Commons, where I posed for this photo in the Prime Minister's chair. (I posed for another, standing in the Speaker's chair, but I don't have that one scanned.)


I couldn't help but feel awe as I absorbed the atmosphere and gazed at all the empty chairs around me. In a few hours, those seats would be filled by people discussing issues affecting millions of citizens. They'd argue and shake their fists and sometimes turn purple with rage, but as our representatives they'd hash our their differences with words, not violence. This is the great blessing of civilization. Democracy can be ugly, but how much uglier are the alternatives?

At the time I still considered myself a Conservative, though my faith in that particular ideology had been shaken by my experiences as a PC volunteer during the 1986 provincial election. Meeting Brian Mulroney in person  did nothing to bolster my confidence in Tory beliefs.

Even so, I still came out of the experience with enhanced respect for elected officials, whatever their party affiliation. I saw how hard they worked for often dubious rewards, including the scorn of the very people who put them in office. Politicians should, of course, expect such scrutiny; their job demands it. But I feel empathy for those who choose to serve.
Posted by Earl J. Woods at 5:43 pm

Earl, you are one unique cat.

Some people see the world through rose-coloured glasses. Others peer through beer goggles.

You're the only person I know that can poeticize politics. There is no term I am aware of for the eyewear one needs to make our electoral system look so positive.

"Poleconomoptics" is a bit of a mouthful, but I like it! I wouldn't be surprised if political communications folks started using it.