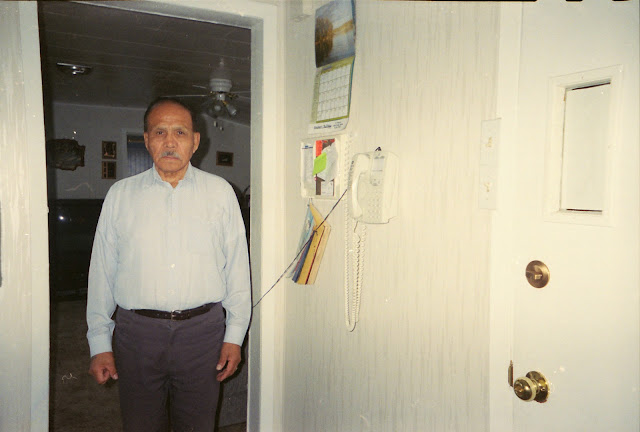 Today is National Aboriginal Day in Canada, but despite growing up in northern Manitoba I feel woefully unqualified to speak to the complex issues surrounding the relationship between Canada's indigenous peoples and the European settlers from which I descend. My limited experience comes almost exclusively from my mostly long-distance relationship with my paternal grandmother's decades-long partnership with Val Head, seen here a few years ago at their home in Cranberry Portage, Manitoba.

I only saw Val every few years after we moved to Alberta in 1979, but during the 1970s Val was involved in several memorable family adventures, including the time we wound up trapped on an island during a thunderstorm while on a fishing trip; we put baby Sean under the boat. Val was very good at catching, cleaning and cooking fish over a campstove (Mom and Dad were no slouches either); to this day my favourite meal remains fresh pickerel fried exactly that way, even though I haven't tasted it in probably 30 years.

Val also taught me how to utter a moose call, a party trick that I've used to amuse select friends and colleagues over the years, much to their collective amusement.

In recounting these memories I worry that I'm stereotyping Val in the "Indian guide" role; he was much more complex than that. He took care of Grandma, he played guitar, he had a huge collection of old Westerns on VHS, and he loved gadgets; for many years, Grandma and Val were early adopters of a bunch of cool technology, and in fact they passed along a very nice (for the time) video camera that I used through high school and university to make most of the silly movies Paranoid Productions is famous (?) for, including Bitter Litter and Generous Nature.

I'm glad Val was in our lives. I wish I'd asked him how he felt about aboriginal issues; he never mentioned the subject in my presence. He struck me as the type of person who just wanted to get along with others, but I'll never know what his true feelings were. If you fail to take advantage of your opportunities to understand people, you'll lose them. Maybe that's what National Aboriginal Day should be about.
Posted by Earl J. Woods at 6:30 pm