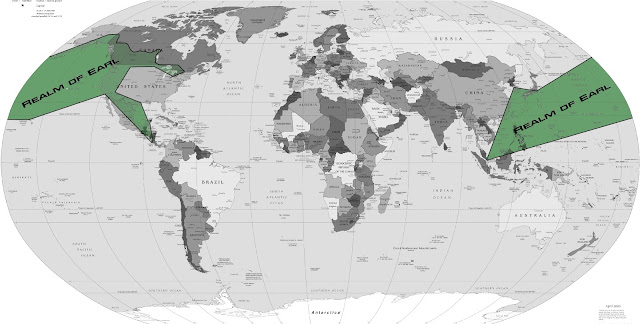 As noted back in 2012, keeping my map of travel conquests up to date is a tricky business, and this map reflects further refinements to my methodology. I'm trying to map the furthest extent of my travels and fill in the spaces between those outermost points as if they're now Realm of Earl territory. This inevitably leads to some distortions, as connecting the dots creates the illusion that I've been to more places than I have. For example. I've been to Singapore and Honolulu, but I haven't been to the Philippines. Nor have I visited northern Mexico. On the other hand, since that last map I've been to western Costa Rica, expanding my territory slightly southward in the western hemisphere.

A number of priority destinations remain unvisited thanks to various personal circumstances:


And as noted last month, I'm hoping to visit Cerulean, KY next year to see a solar eclipse. If we make it, and if we drive as planned, that might add quite a bit of new territory to the map.