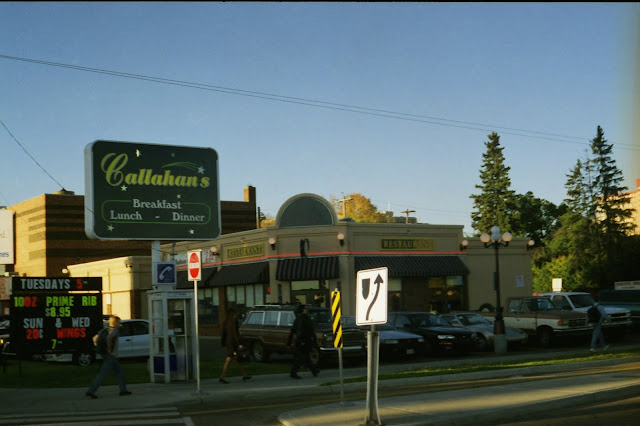 This restaurant - seen here sometime in the mid-1990s - sits at the south end of the High Level Bridge, near the University of Alberta campus. Sometime in 1990 or 1991, I went for supper there, along with Carrie Humphrey and perhaps some combination of Paul Allen, Tony Longworth, Ron Briscoe, Steven Neumann, Susan Neumann, Andrea MacLeod, Jeff Shyluk, Allan Sampson and Jim Sandercock: the core, in other words, of the University of Alberta Star Trek club, as it was in the all too brief months before I earned my degree.

The only thing I really remember about that evening out was that Carrie flung ice cubes at one of us and missed, striking another diner. Sheepish apologies were handed out and the breach was forgiven.

I'm not sure why that memory has stuck with me, when I'd much rather remember what we might have been talking and laughing about. Cruel, cruel entropy.
Posted by Earl J. Woods at 5:08 pm