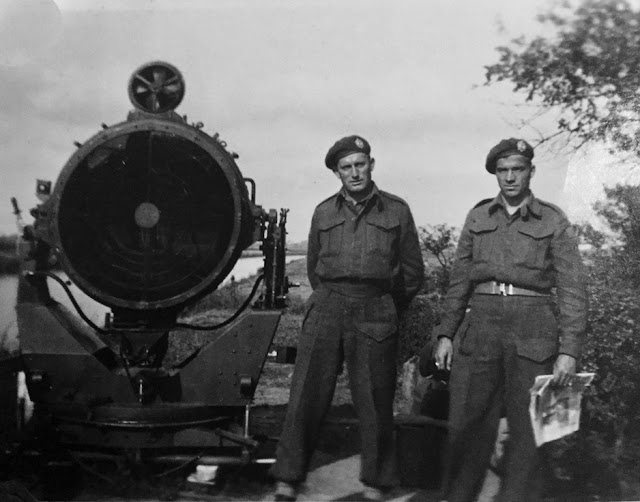 Mom sent me some old pictures of her first cousin Aldon Gray (left), of whom she says: "He landed at Normandy and walked all the way to Germany with the South Saskatchewan Regiment. He was lucky to survive, as he was in the infantry and was under fire a lot. As he was single, he stayed in Germany to help with the displaced people until he came home in 1946. He was a quiet person, but very smart. He died in Deer Lodge (a military hospital) in Winnipeg at the age of 97. Your dad and I went to his funeral."

I appreciate Mom letting us know this slice of family history. I cleaned up the photograph she sent a little bit. I wonder what that piece of equipment is to Aldon's right; it looks like either a spotlight or one of those signal lights with the shutters.
Posted by Earl J. Woods at 6:27 pm

I'm almost positive your relative is standing next to a 90 cm searchlight, a common but important piece of Allied equipment. It would be used to pick out German night fighters trying to penetrate land and sea defenses.