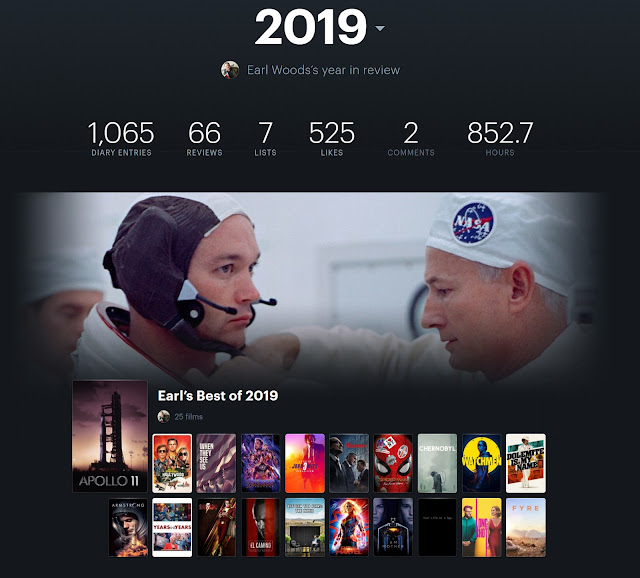 I watched 1,065 movies this year. That seems rather a lot. 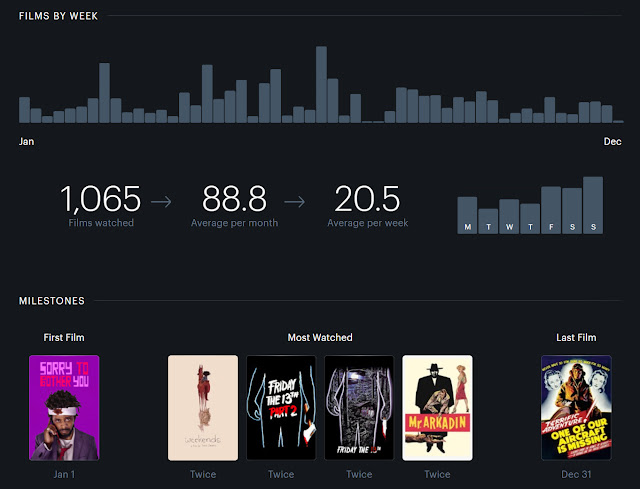 There was only one week when I didn't watch a film: while Sylvia and I were on vacation on the east coast. I can explain why I watched Mr. Arkadin twice; it's a great film, and there were two versions on the DVD set. The others were accidental rewatches. 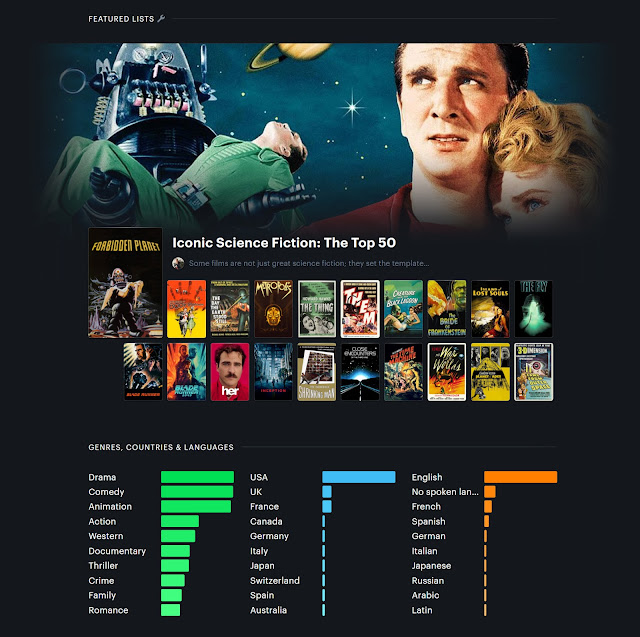 Letterboxd gave members the ability to add a featured list to their annual statistics; I chose my Top 50 Iconic SF films. Below that, you can see my breakdown of films according to genre, national origin, and language.

The pie charts show that I reviewed only a fraction of the movies I saw, that most of the movies I watched predated 2019, and that I only rewatched a few films. The bar chart shows my ratings spread. Finally, Letterboxd reveals that I watched 197 of the movies on my watchlist, but that I also added almost 1,700. This seems to be a losing battle. 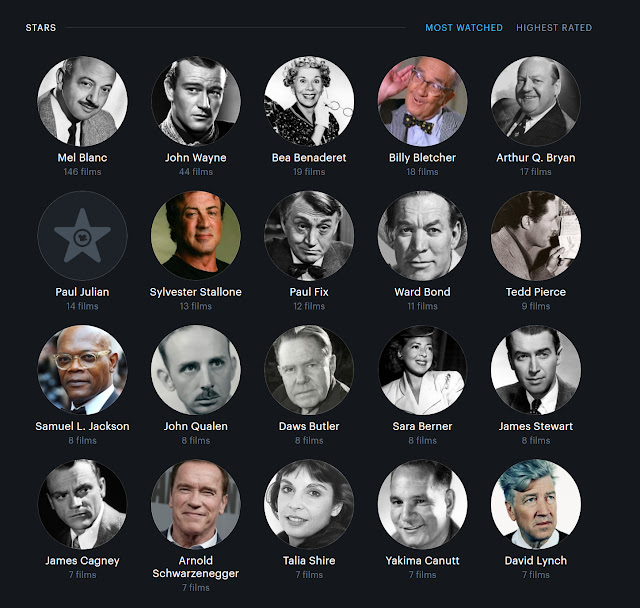 I'm not sure how Letterboxd defines which actors are stars and which are not, but in any event, here are the stars I watched most this year. Aside from John Wayne, the top row is dominated by Looney Tunes voice actors, which makes sense because I watched four box sets of WB cartoons in 2019. Paul Fix, Ward Bond, and Yakima Canutt were in a lot of westerns, and so they appear because I watched a lot of westerns last year. I went through a Stallone phase and a Schwarzenegger phase in a fit of nostalgia. 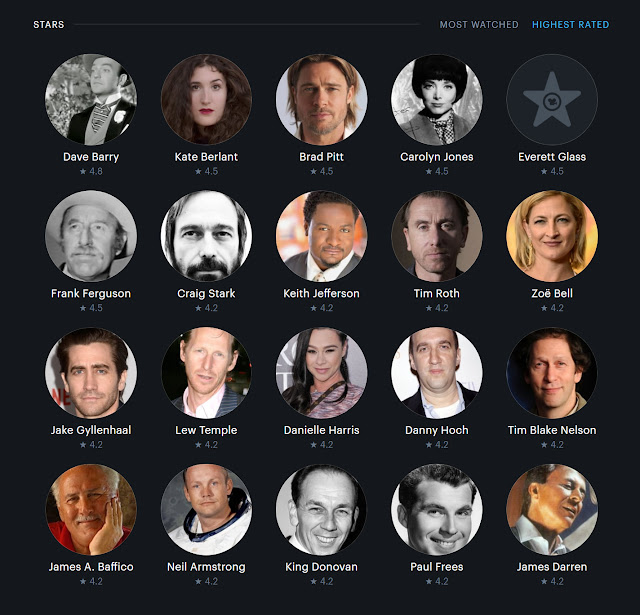 Here's a very different look at the stars: "highest rated." I'm not sure how Letterboxd determines this. 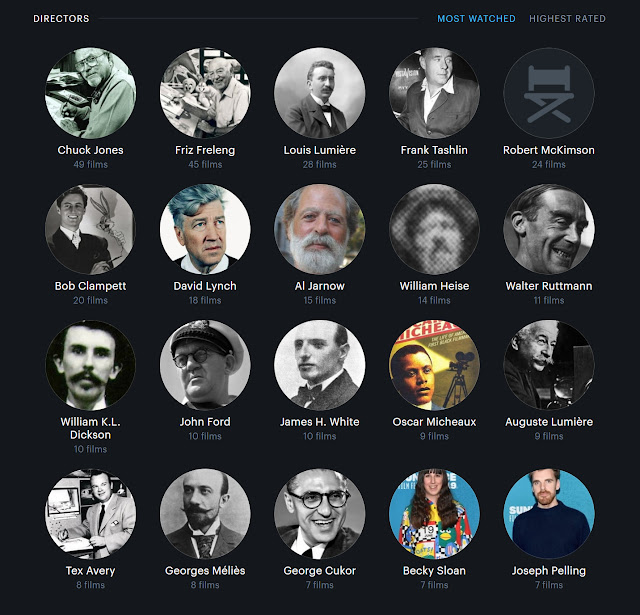 Here are the directors I explored most this year. Chuck Jones, Friz Freleng, Frank Tashlin, Robert McKimson, Bob Clampett, and Tex Avery appear because of those Looney Tunes box sets. Heise, Lumiere, Melies, White, and Dickson appear because I try to screen early cinema whenever I can. John Ford, David Lynch, and George Cukor are favourites, of course. 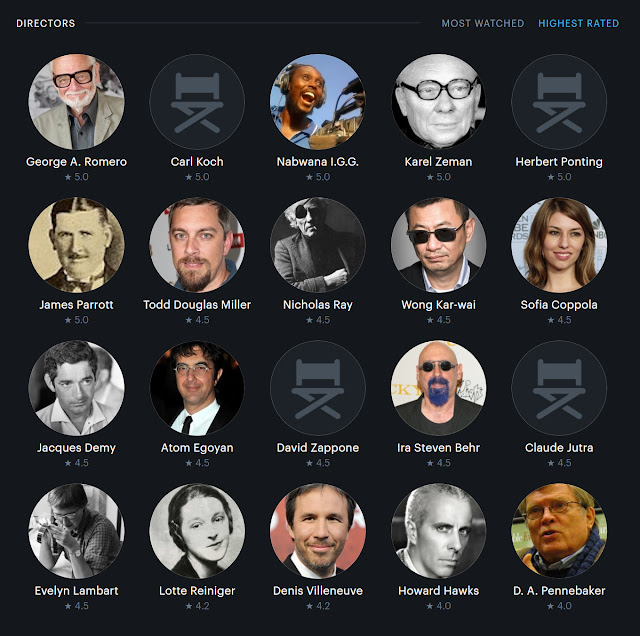 And here's the mysterious "Highest Rated" version of my director list. 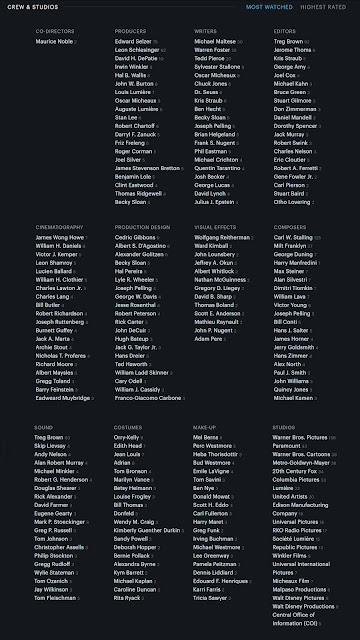 The rest of the crew. This year, Letterboxd added co-director and studio stats. 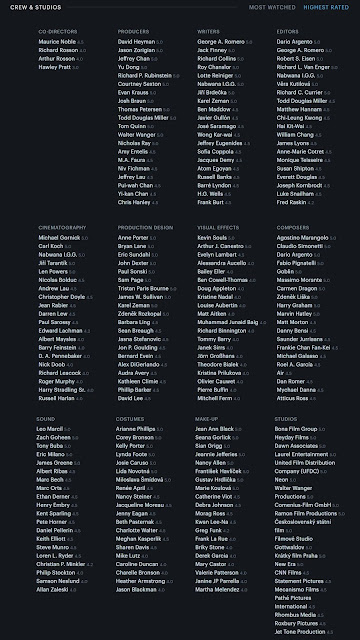 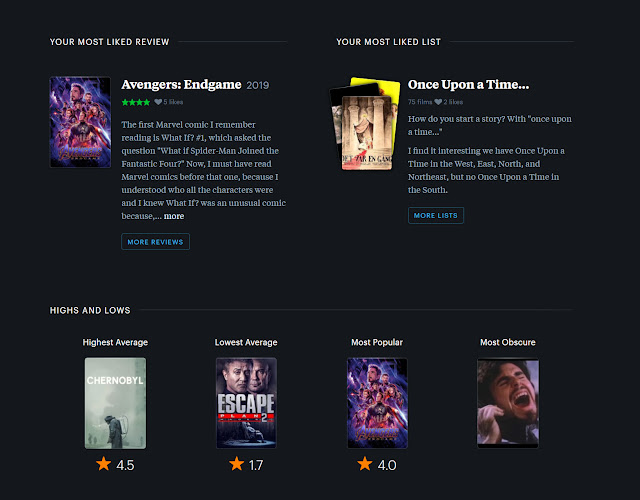 My most liked review and list...such as they are. 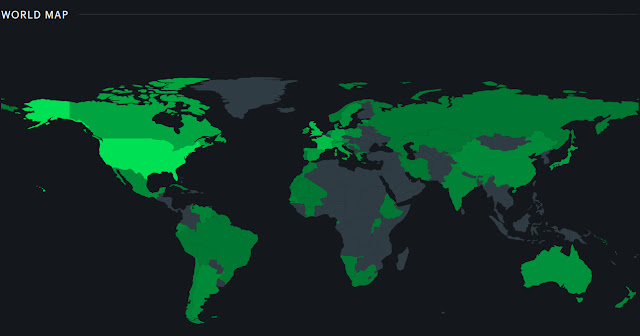 And finally, my world map, which shows where the movies I watched in 2019 were made.

Here`s how the decade-by-decade screenings went down:

My focus in 2019 was to capture films from a wide range of decades, directors, and styles, while also dusting off some discs that I`ve owned for years but had not yet watched and exploring some actors and directors in more depth. I think I accomplished that, making my way through four out of six Looney Tunes box sets, a bunch of 21st-century Best Picture nominees, a ton of John Wayne films, and a mixture of classics and not-so-classics from across 14 decades of film.

Probably contributes to your Coke habit, too.