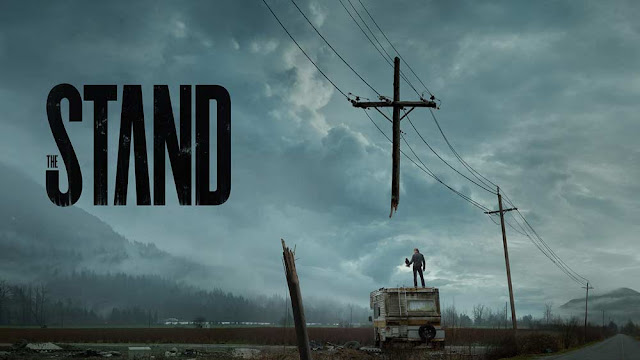 I don't envy anyone who tries to adapt Stephen King's magnum opus, The Stand. The book's greatness doesn't lie in its good vs. evil plot, but in the tremendously evocative way King captures the downfall of the world and the impact of Captain Trips on the survivors scattered across the United States. Journeying with the survivors as they seek out each other and try to rebuild some semblance of civilization is a genuinely satisfying adventure.

Even the main storyline - the confrontation between the forces of Mother Abigail and Randall Flagg - is tense, exciting, and even surprising on first read. Yes, the deus ex machina resolution of that confrontation still makes no sense, but almost everything before and after is full of taut drama, wonderful characterization, and some delicious philosophizing on the nature of good, evil, and civilization.

Unfortunately, no film or miniseries can do justice to the world King builds in The Stand. In this 21st-century adaptation, we barely get to know the main characters before they're gone. Some important secondary characters disappear entirely, or are replaced with hybrids. Many of the most evocative scenes are lost so as to cram the bare bones of the plot into a few hours. (Stu's return west is just one example.) Frannie Goldsmith is woefully miscast for the second adaptation in a row. And for some unfathomable reason, the first half of the narrative is presented non-linearly--a choice that certainly works in some contexts, but woefully out of place for this story, which depends so much on the unfolding events of the plague.

This adaptation's bright spot comes in the last episode, a new coda written by Stephen King that explores the conversation Stu and Fran have at the end of the original, shorter version of the novel. King sends Stu and Fran back to Ogunquit to see if they might not be better off starting their own little civilization rather than staying in Boulder, which shows hints of returning to the old ways that ruined the old world. As in the expanded version of the novel, King brings back Flagg, but he also brings back a new incarnation of Mother Abigail, along with a test of Fran's character. In this new coda, King adds new meaning to the title of his novel, putting the Stand in personal terms; still a conflict between good and evil, but on individual terms. There comes a time when we all have to take a stand.

I would have given this review another star had the miniseries ended here, but instead King couldn't resist including the tacked-on "gotcha" ending of the expanded version of the novel, in which Flagg returns to conquer an isolated indigenous tribe, suggesting the cycle will one day start all over again. As it did way back in 1990, this feels more like a cheap horror film trope than an effective way to end the book. Does God really feel it necessary to purge the Earth every couple of thousand years? I thought he promised there wouldn't be any more floods...maybe we took that too literally.