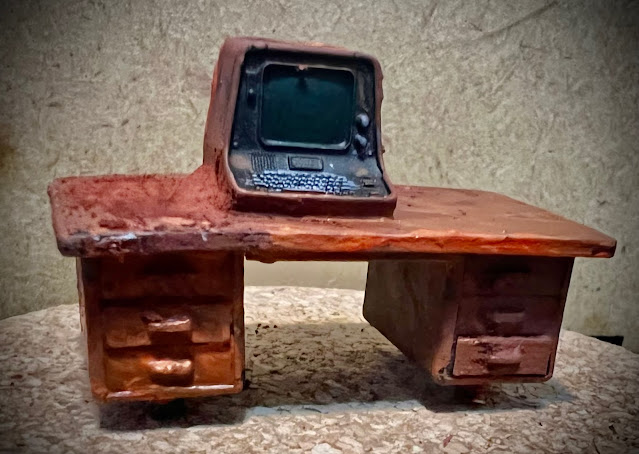 For this workstation, I had in mind the Fallout games, which seem to show that a lot of the furniture is made of metal, including the computer desks. I primed this model in black, painted the computer terminal silver, then coated everything in various shades of rust from the Vallejo rust effects kit. The only place unmarred by rust is the front of the computer, which I imagined as plastic. My justification for covering the entire thing in rust comes from seeing some flooded areas in the Fallout games. I don't think it's beyond the pale that a desk might wind up as coated as this.

The Vallejo kit comes with brown iron oxide pigment, you'll see some piled up to the left of the terminal. I love the 3D effect the pigment provides, but the stuff is messy as heck to work with, leaving stains all over my hands and everything else I come in contact with. I need to think of a better way to apply the stuff; right now, I'm just trying to dump small amounts from the bottle and use the brush to spread it around, which works to an extent, but it's a bit haphazard and I feel like I should have more control.

Jeff recently sent me some excellent tips that I'll apply in future models. I have a bit of backlog to share so better models may not turn up on the blog for a while, but I definitely feel like my improvement has stalled a bit. But I'm excited for what's ahead!