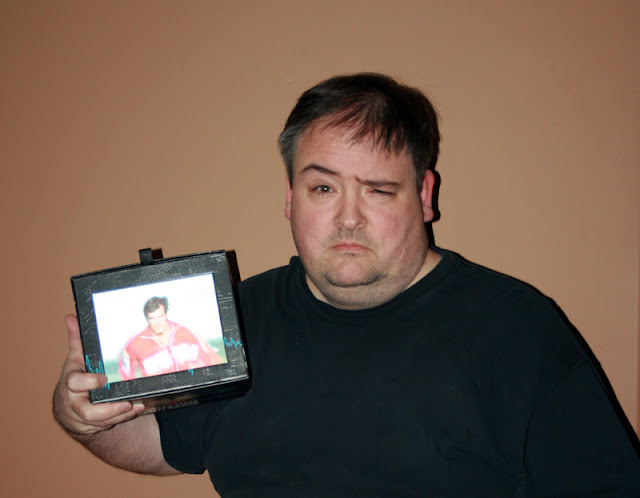 Fans have been waiting for The Six Million Dollar Man (and its spinoff, The Bionic Woman) to appear on DVD since the format’s debut. At last Time-Life has released the entire series in a handsome box set that includes all five seasons of the show, all the crossover episodes of The Bionic Woman, all the reunion telemovies and a collection of comprehensive featurettes and audio commentaries. The first season of The Bionic Woman is also available, with a less impressive but still satisfying collection of special features, including The Six Million Dollar Man crossover episodes and some very informative – even moving – audio commentaries from Bionic Woman creator Kenneth Johnson, later famous for The Incredible Hulk and V. I just finished watching the first seasons of each show, and they still stand up as wholesome entertainment, generally uncomplicated and sometimes less ambitious than they could have been, but fun.
Here's a look at the packaging:

The Six Million Dollar Man tells the story of “Steve Austin, astronaut…a man barely alive” thanks to a terrible plane crash that costs him three limbs and an eye. His lost parts are replaced with bionics, artificial replacements that make him “better…stronger…faster,” in the immortal words of the show’s opening montage. The spinoff series, The Bionic Woman, arose out of a popular second-season two-part episode of The Six Million Dollar Man that introduced audiences to Austin’s high school sweetheart, Jaime Sommers (Lindsay Wagner), transformed into a bionic woman because of a convenient (for narrative purposes if not Jaime) skydiving accident. Every week, Steve and Jaime performed astounding physical feats to save their country and sometimes even the world from terrorists, criminals, spies, saboteurs, robots, aliens and rogue space probes. They crashed through stone walls, threw fence posts hundreds of metres, ran at highway speeds, screwed on lug nuts with their bare fingers and tossed bad guys around like paper dolls.
This was pretty heady stuff for the children of the 1970s, who were naturally excited by the idea of being faster and stronger than humanly possible. (Kids didn’t seem to mind that horrific accidents were a prerequisite for bionic augmentation.) Back in grade school, I used to amaze friends with my ability to arch one eyebrow to express surprise or skepticism. Nearly everyone assumed I was emulating Star Trek’s Mr. Spock, but in fact I was aping Lee Majors, the six million dollar man himself. Like Spock, Major’s Colonel Steve Austin cocked a mean eyebrow.
The Six Million Dollar Man was one of a select number of genre shows broadcast way up north when I was living in Leaf Rapids, Manitoba. (The others were Star Trek, H.R. Pufnstuf, and Space: 1999.) Our television only received three channels, one of them French, so choices were limited. Fortunately CBC was pretty genre-friendly in those days, giving my friends and I ample fodder for the imagination. As often as we played cops and robbers, Fantastic Four or Star Trek, we pretended to be bionic boys and girls. I may not have possessed bionic strength or speed, but my eyebrow action was pretty convincing, at least on the playground. A cousin had the famous Kenner Steve Austin action figure, complete with plastic engine block (to demonstrate Steve’s amazing strength) and see-through “bionic” eye. A friend had the less popular Oscar Goldman figure; Oscar was the head of the Office of Scientific Intelligence, the organization that employed Steve and Jaime. Oscar had one accessory, the infamous exploding briefcase, which didn’t really explode at all; if you opened it in a certain (read: wrong) way, you’d see a sticker lining the briefcase exterior that made it look like Oscar’s stuff had been blown up. Open it another way, and you’d see a different sticker depicting the contents as intact. Cool!
Revisiting the series has been a joy. Before now, I’d never seen the three original telemovies that opened the series: “The Six Million Dollar Man,” “Wine, Women and War” and “Solid Gold Kidnapping.” The eponymous first telemovie is the best of the three, and as with many pilots, there are a number of significant differences in texture and tone from the series proper. While Steve Austin is known as a military colonel in the series, here he’s portrayed as a civilian astronaut, the last man to visit the moon. He’s a bit of an anti-authoritarian figure, laid back, maybe a little snide. After his plane crash, he’s lost, vulnerable, even suicidal. This episode is far darker and more mature than the series that followed, treating the accident with the horror it deserves; when Steve wakes up minus three limbs and an eye, it’s hard to watch a formerly proud and independent man struggle to adjust to his new reality. Austin is horrified at first when Dr. Rudy Wells presents his new arm in a display box, not wanting to be transformed into a freak or a monster. The limits of the new limbs are treated realistically; while the fake skin has sensors, when Steve asks if he’ll really have a sense of touch like he did before, the question is answered with a heavy dose of evasion and embarrassment. He’s not the same man he used to be, and while he may indeed be faster and stronger, he’s not necessarily better.
Oscar Goldman doesn’t appear in this film; instead, Steve’s boss is the Machiavellian Oliver Spencer (Darren McGavin), head of the Office of Strategic Operations (OSO), a far more sinister-sounding organization than Goldman’s OSI. Oliver shows no sympathy for Steve’s plight; to him, Steve is a convenient test bed for bionics technology. “A robot would have been better,” he says at one point when describing the OSO’s need for a new kind of secret agent, “But given the current stage of technology, a cyborg will have to do.”
Spencer isn’t shy about letting Steve know that the government expects to be paid back for its six million dollar investment.
“I don’t want to kill anyone,” Steve says, almost mournfully. Spencer says that depends on Steve’s skill, and promptly sends him off on a dangerous, literally impossible mission (the target Steve is sent to rescue is already dead before Steve even begins) merely to see if Austin can return intact: “Please, please, Wells, don’t be sentimental. I can always have another cyborg built if this one fails. But if he should survive, which appears to be doubtful, then I know that I have my man.”
Strange opening for the second and third Six Million Dollar Man telemovies.

Of course Austin does survive. After two more telemovies, which oddly enough try to transform Austin into a James Bond-like figure complete with tuxedo, supervillains and exotic, willing women, the series proper begins. Early episodes explore Steve’s continuing ambivalence about his situation. Whenever he’s forced to use his bionics in front of witnesses, he explains the situation with discomfort: “I had an accident…they gave me some new parts,” or words to that effect, always with a degree of uncertainty and perhaps even shame.
The first season features a number of notable guest stars, including George Takei, John Saxon, Greg Morris, Farrah Fawcett (as astronaut Kelly Woods – no relation) and, in a bizarre, over-the-top performance, William Shatner. Shatner plays an astronaut who returns from a space mission with strange new perceptions and powers, abilities that eventually drive him insane. Shatner’s scenery-chewing is a thing of wonder, and I’m honestly uncertain as to whether it should be judged as transcendental genius or the nadir of his career.
There are some interesting technical glitches in the first season; one line of Majors’ dialogue seems to be read offscreen by a production assistant, as if they forgot to loop in Majors’ line during ADR. It’s quite jarring to see Austin’s lips moving with the sounds of someone else’s voice. Expensive stunt footage is reused frequently, sometimes in back-to-back episodes. And there are some very strange sudden zoom effects, as if to hide special effects rigging. But these oddities only add to the show’s charm.
Even as a product of the cold war, the bionic shows are curiously apolitical. Steve has several sympathetically-portrayed cosmonaut friends, and works with the Soviets on more than one occasion, presumably thanks to détente. The OSI seems to have no overt political agenda other than to protect military secrets, rescue hostages, conduct scientific experiments and complete other miscellaneous do-gooder tasks. They fight terrorists, deranged people and common criminals more often than ideological enemies. Then as now (see The West Wing and 24 for more recent examples), when our heroes do tangle with other nation-states, the enemy countries are generally thinly-disguised fictional analogues.
The first season’s special features reveal that series producer Harve Bennett – formerly of The Mod Squad, later to revive the Star Trek motion picture series – intoned the famous “Steve Austin…a man barely alive” voiceover for the opening credit sequence. Bennett has some fascinating stories about the show’s production, including Lee Majors’ enthusiasm at performing his own stunts, the challenges of small budgets and tight deadlines, the huge ratings success of the show and its distaff spinoff, and even the tale of the real pilot injured in the stock crash footage used to depict Austin’s accident.
The Six Million Dollar Man: The Complete Series is a pricey package, available for purchase only online at Time Life, but with over 100 adventures and a plethora of special features – not to mention the very handsome packaging, complete with lenticular art and sound effects – it’s worth every penny for fans of science fiction, nostalgia, or 70s kitsch.
Posted by Earl J. Woods at 11:12 pm

I guess Lee Majors's fondness for doing his own stunts served him well in The Fall Guy.

You have tempted me with this review, my nostalgia explodes with delight.

When I was little I always mixed up the name and called it, "The six dollar million man." I guess I liked the cheaper version.

I don't remember those tele-movies at all. They actually sound interesting. However, as I am not overly nostalgic, NOT a fan of 70's kitsch, though I am a science fiction fan, I suspect that I would spend a lot of time cringing were I to watch this show again.

I was an official card-carrying member of the Six Million Dollar Man fan club.

I wish I knew where that card went.