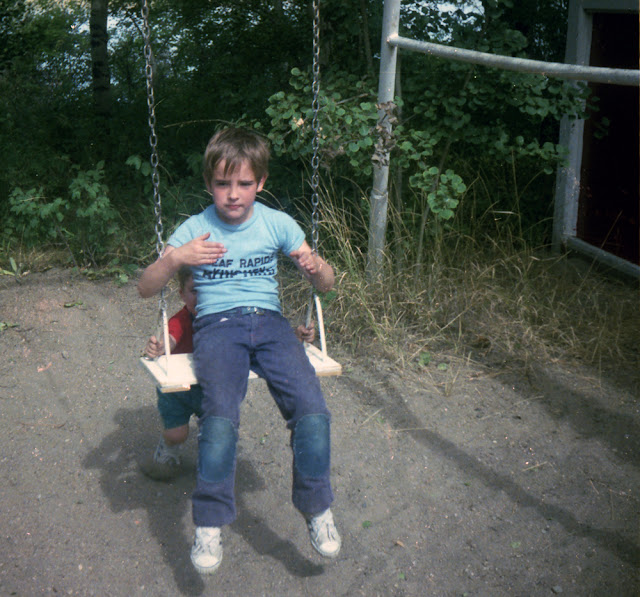 Even though Sean is doing his best to give me a good push on the swing, I don't seem terribly impressed in this photo. Perhaps it's because of the painful memories associated with the Leaf Rapids Blue Jays shirt I'm wearing.

In one game, I stepped up to the plate thrice and earned a walk each time. Not because I had a good eye, but because the pitcher nailed me in the genitals with fastball pitches not once, but twice. I took my base doubled over each time, trying not to vomit. Third time up I tried to dodge the final wild pitch by thrusting my hips forward, but the ball wound up smacking me in the left buttock, which at that speed was almost (though not quite) as painful as the groin hits. It was only then that our coach had mercy on me and allowed me to sit out the rest of the game.

To the opposing pitcher's credit, I don't believe he deliberately aimed at my delicate bits; I still remember his tear-streaked features as he watched me stagger to first base. But as much as I appreciated his empathy, I would have appreciated better aim even more.
Posted by Earl J. Woods at 8:25 pm

Were those tears of contrition or tears from laughter? Because you konw if it happened to, say, Jeff you'd be doubled over and snorting.