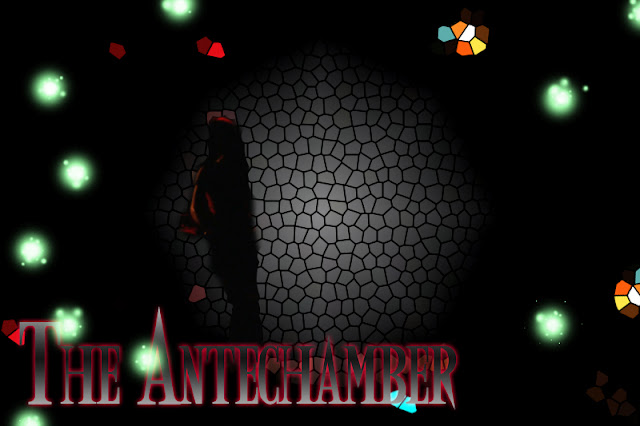 "Ungood Art Day" is one of my favourite features over at Jeff Shyluk's Visual Blog. Jeff is a real artist, so his failures are more compelling than the average hack's triumphs. The average hack's failures, therefore, fail to meet the "ungood" bar and instead strain to achieve merely doubleplusungood.

Once again I've stumbled across an hold high school photo that's beyond my capabilities to restore, so instead I've played with layers and brushes and blending tools and filters to craft this mess. In the original photo my high school friend Keith is playing guitar in a dimly-lit auditorium. My old Kodak 110 didn't have a powerful enough flash to illuminate the scene, so Keith is mostly lost in shadow. A few overhead spotlights and a tiny floor light gave Keith a slight glow. I selected out Keith and threw a stained glass filter atop everything else. I duplicated some of the cells, simply because there weren't enough light sources to create enough virtual glass. (I'm not sure why there's a large expanse of cells in the middle of the image, because the area is pitch black in the original photo.)

A nifty YouTube tutorial showed me how to paint fun glowing orbs, so I naturally abused the technique and painted ten when three or five would probably have done the job.

The scene wound up looking as though Keith is playing the role of a young guitar player recruited by beings from another dimension to bring rock to their universe. Hence, "The Antechamber," where Keith waits to cross to another place.
Posted by Earl J. Woods at 8:44 pm