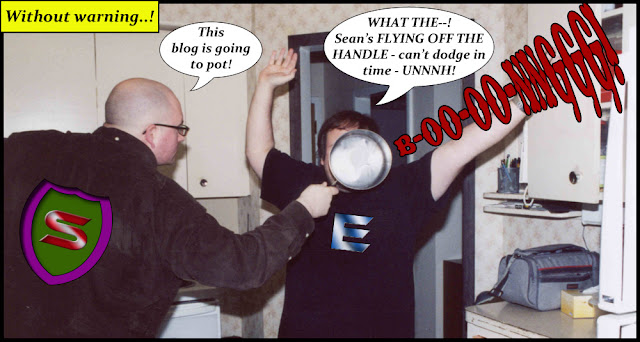 With apologies to Roy Lichtenstein.

Comics cannot be read in the same manner as prose; instead, the reader must interpret both art and text, filling in gaps in the action with his or her imagination. While the art freezes a single instant, the text encompasses several seconds. As you read the text, left to right, does your perception of the characters change? As Sean says "This blog is going to pot," is his arm raised, ready to strike? Are Earl's arms flung upward before or after you read his speech balloon? Does the sound effect - "B-oo-oo-nnggg!" - happen at the same time as the pot strikes Earl's face?

Astounding, isn't it, how your mind fills in the gaps?
Posted by Earl J. Woods at 7:45 pm

You should probably apologise to Wil Eisner as well, if you really want to be apologetic.

Lichtenstien was much more interested in getting solid colours of enamel to bind to metal than he would be in staging comic-book action, although certainly he staged some of the art world's favourite poses. I would consider Lichtenstien's genius to be towards his mastery of the physical medium more than his artistic composition. Painting that much enamel by hand is a poisonous chore.

Eisner was following what you see in photographs, or as you rightly posted, what you don't see. To show the drama of an impact, you don't actually draw the impact. Until you got fast-exposure films and stroboscopic photography, it was damned difficult to squeeze the shutter exactly at the moment of impact. Photographers learned that you can tell the story much more easily by depicting the before or after frames rather than the actual impact. This is the kind of thing that illustrators had being doing for hundreds of years before photography.

So, traditionally, you'd see the anticipation, or the initiation of the action; or the follow-thru, the result of the action. The actual action/impact can be inferred. Back in the days of the Comic Book Code, that kind of composition was vitally important. If you went too far with the action, you ran the risk of censorship. Maybe Flat Top's teeth were loose because he never went to visit a dentist, and not so much because Dick Tracy had the most powerful right hook in town after Superman. By skipping the actual hit, there was room for inference that allowed the more action-packed comics to stay within the Code.

These days, it's more common to see the hit. Advances in photography (plus luck?) allow us to see the moment the bullet hits the rebel. Ultra-slo-mo spends hundreds of frames a second to show us the boxer or the baseball getting knocked out of the park.

But if you have just one frame, the convention is to skip the impact and show the strongest pose that tells the whole story, the "key frame".