Battles of the Fitzpatrick Expanse

On Friday night Sean and I travelled to Steve's place to try out A Call to Arms: Starfleet for the first time. Having (mostly) assembled and painted our miniatures months ago, it was long past time to test our metal - and mettle - against the starry backdrop of simulated interstellar conflict. Above, Sean and I prepare for battle. 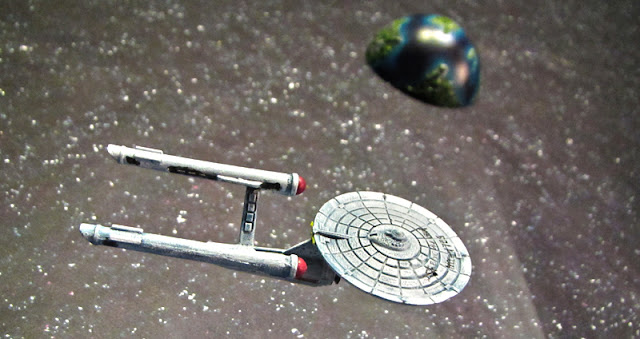 Here, the intrepid souls of the U.S.S. Excalibur, representing the peaceful United Federation of Planets, enter the Fitzpatrick Expanse to explore the cosmos and extend the hand of interstellar friendship. 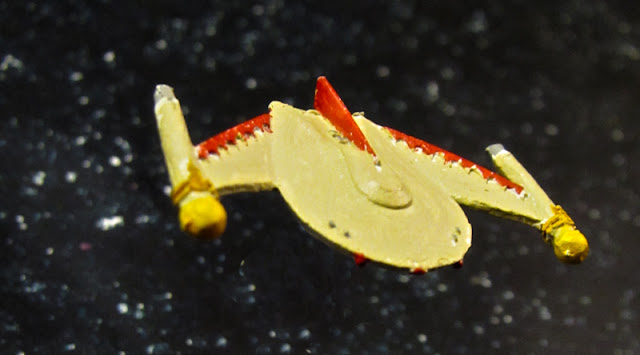 Alas, the warmongering sneaks of the Romulan Star Empire have laid claim to this system, ambushing the Excalibur. 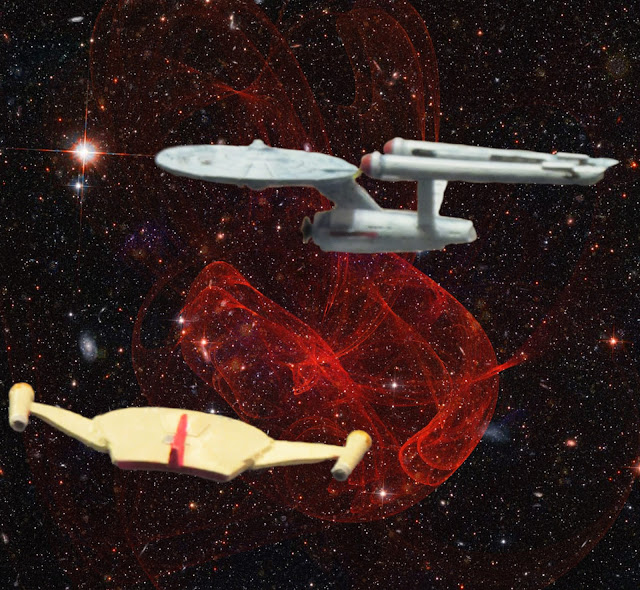 Our paint jobs aren't nearly as slick as Steve's, but I think Sean and I both acquitted ourselves decently given the learning curve. 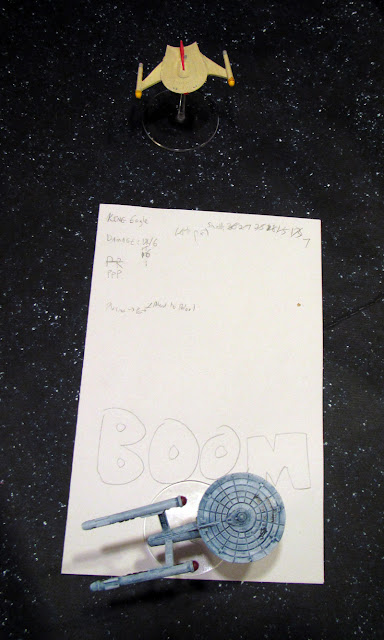 Alas, I blundered into the path of Sean's powerful plasma torpedoes and thus the Excalibur was destroyed with the loss of all hands. 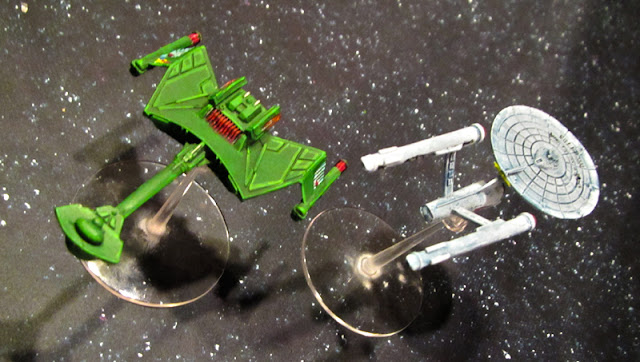 I fared a little better against Steve's Klingon D7. Our match went right down to the wire, but in the end his warriors were victorious, and the Excalibur exploded a second time.

After investing a considerable amount of time and effort into assembling and painting the miniatures, I'm glad the game itself turns out to be a tremendous amount of fun. The game's mechanics are simple enough to pick up after a couple of playthroughs, but versatile enough to emulate all the dramatic action of the Star Trek television shows - reinforcing shields, performing high energy turns, sealing the bulkheads, running damage control teams, overloading the weapons and so on. I think I need one or two more practice sessions before moving on to larger-scale games with fleets, though!

Here's Steve's account of the battles.
Posted by Earl J. Woods at 7:22 pm

Your pictures make all our ships look better! I'm very much looking forward to locking horns with the next unfortunate Federation lapdog who challenges the Empire.

All that Star Trek... watching TV, in the theatres, collecting VHS, collecting DVDs, collecting Blu-Ray, there's LaserDisc and streaming video... and you lost?!

Kirk cheated. You should have cheated too. Print out and hand out some "living rules" that you claim you got from the game publisher's website. Change some of the rules in your favour with Photoshop. Nobody would have seen that coming. Boom goes the Klingon dynamite! Best of all: its canon!