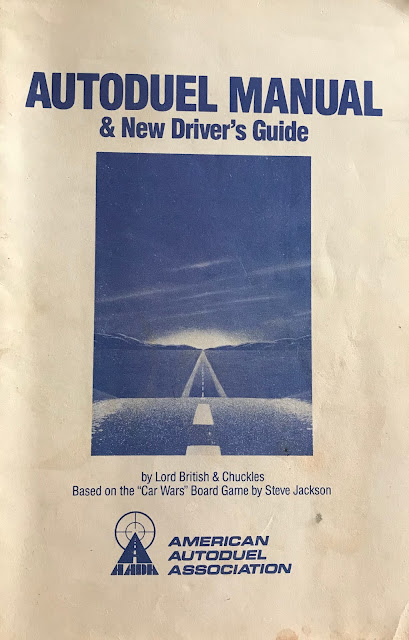 Here is all that remains of Sean's copy of Autoduel for the Atari 8-bit computers. It's a thick manual rich in complexity and lore, back in the days when computer games often included not only really well-produced manuals, but also maps, keyboard or joystick inserts and attachments, reference cards, and, best of all, little tokens and toys that represented something you might encounter in the game.

Autoduel itself was a fantastic game, based on Steve Jackson's popular Car Wars strategy game. The premise is simple; you start out with $2000 and need to buy a car to start "auto duelling" in the arena or on the highways of the northeastern USA. Sean and I played that game for years, until at last the disc stopped working.

The road to fun with this game got off to a rocky start, however. Sean bought the game with birthday and Christmas and allowance money he'd saved for quite some time, and the first copy we bought was defective. Sean and I returned to the computer store in Heritage Mall where he'd purchased Autoduel, and the proprietor refused to help, claiming we were returning it under false pretenses and had pirated a copy of our own before returning it.

This is one of the few times I've gotten really, really angry in public. All I remember saying is "He's ten years old," in quiet fury. The man behind the counter grumbled and muttered a little more, but in the end he exchanged the defective copy of the game for a fresh one. Thankfully, the new copy worked.

Incidentally, Sean and I recently Kickstarted the latest edition of Car Wars, so at some point in the future, when COVID-19 is no longer a threat, we'll get together to reignite the spirit of a game we really loved back in the 80s.

I was REALLY upset. Thank you for stepping up all those years ago.

I used to have the paper and pencil version of the game. Yours was more of the "Drive Angry" variety. Out of all the Steve Jackson/Lord British titles, Car Wars remains my favourite. Mind you, I really enjoyed Lord British's work in Duke Nuk'em as well.