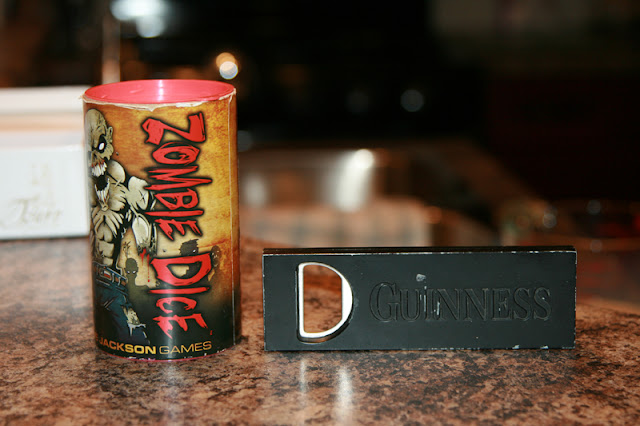 In early May, I left my job at the Alberta Legislature. Fortunately I had little time to wallow in anxiety or sadness, for mere days later the Gaming and Guinness gang gathered at Peter Harris' place to celebrate G&G VII. 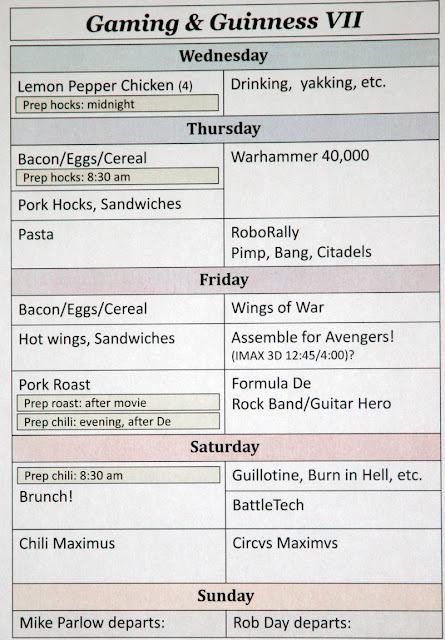 This was Pete's first opportunity to host G&G, and he did a fine job, aided by his superb cooking skills and mild OCD. Guests arrived to find the menu and itinerary already prepared! 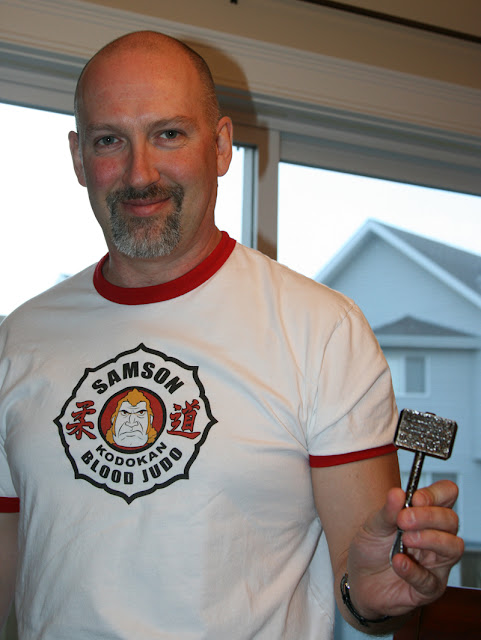 As a small token of my appreciation and in a nod to this year's G&G movie, The Avengers, I brought Pete a Thor bottle opener. 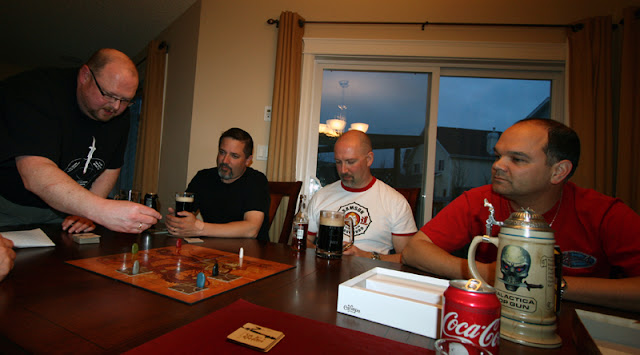 We opened with Tsuro, a beautifully designed strategy game in which coloured stones representing dragons follow pathways, trying to avoid falling off the game board or crashing into each other. It's a fast, elegant game that grows more fun and challenging with each player added. 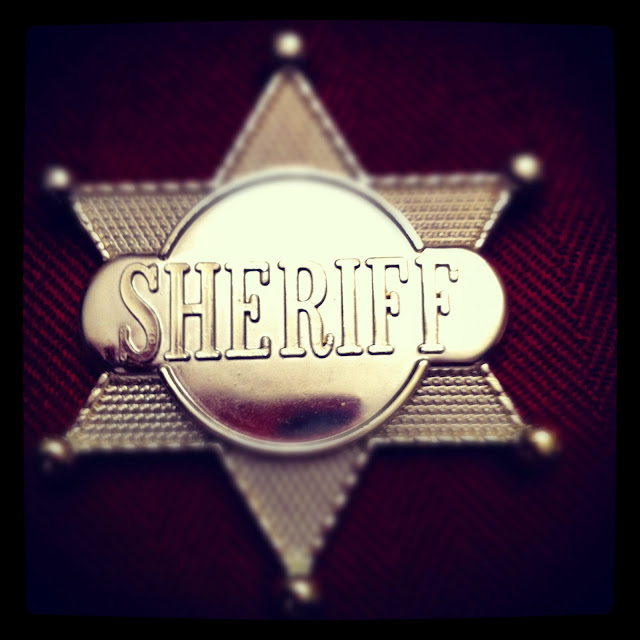 We then moved on to Bang!, a card game that emulates the action of a western-themed first person shooter. 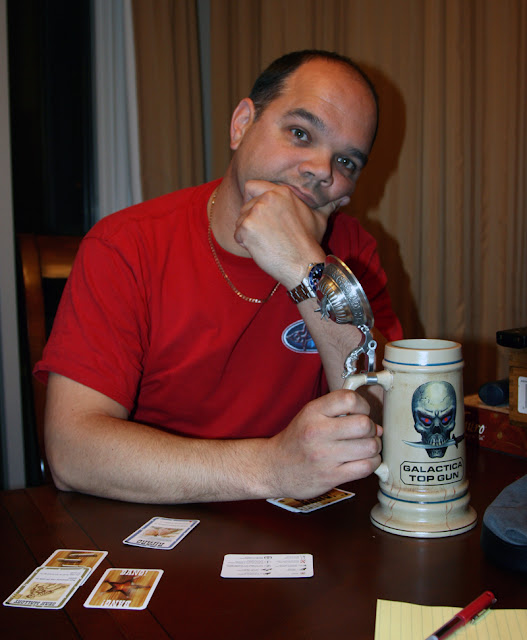 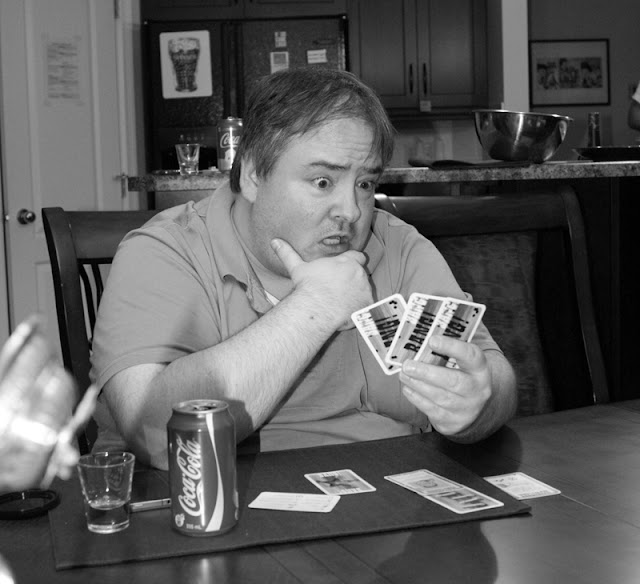 My hand wasn't nearly as good as Jeff's. Or perhaps he simply has a better poker face. 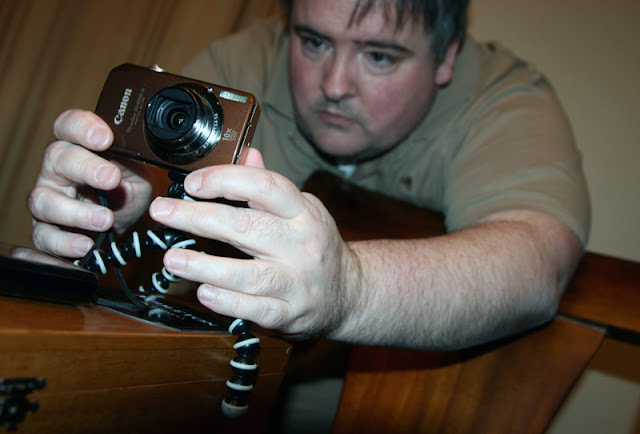 As always, I shot a whole bunch of photos. I'm particularly pleased with the following profile shots of several of the gang: 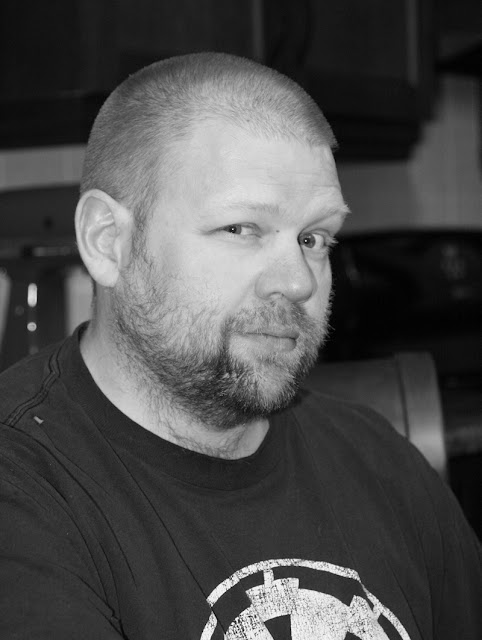 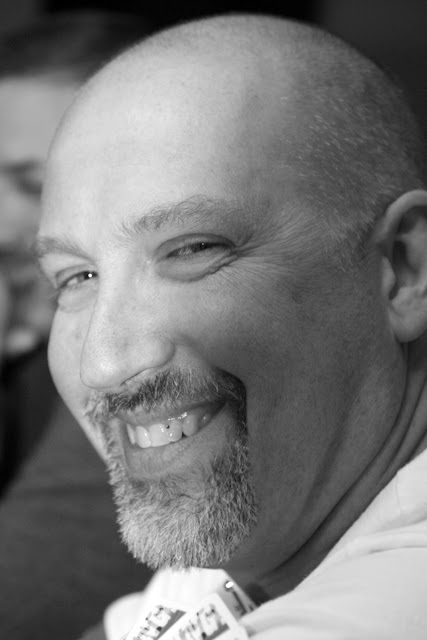 Pete, as the Sheriff of Bang!, kept his cards close to the vest. 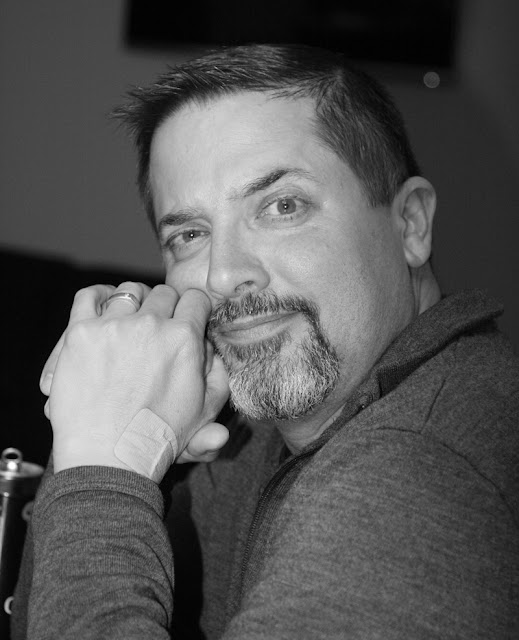 Mike Parlow always reminds me of Count Zaroff from The Most Dangerous Game. 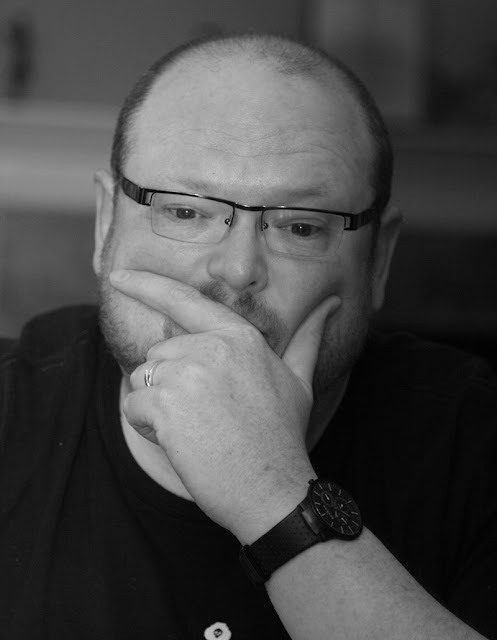 G&G founder Steve is a force to be reckoned with no matter the game. 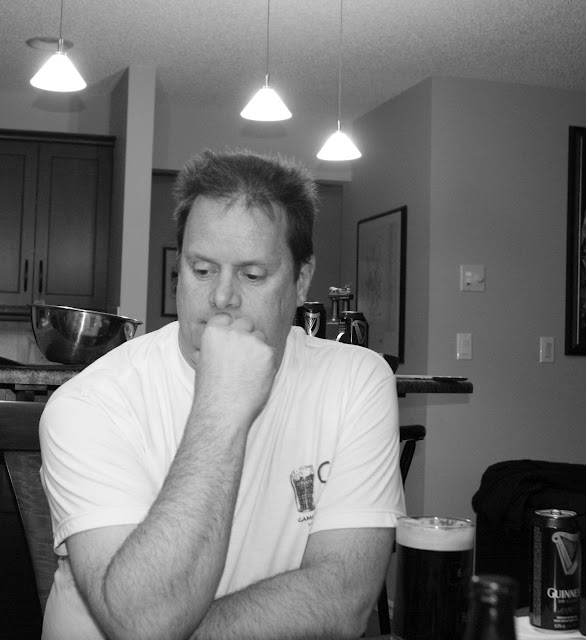 I even managed to capture a rare image of Mike Totman without his middle finger raised. (Perhaps because I didn't actually snap this photo.) 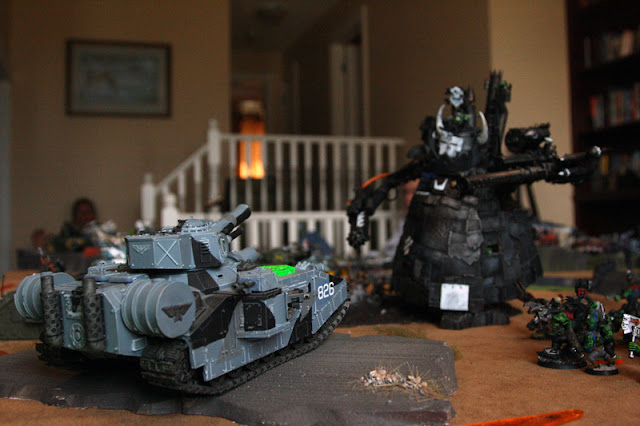 I don't usually participate in the massive Warhammer battles that usually serve to open G&G, but this year I was responsible for suggesting the terrain type, to wit, the Mojave-like environs seen in several Star Trek episodes. Scott built the terrain, but he graciously asked me to help with the initial layout of the various cliffs, rivers and other features. 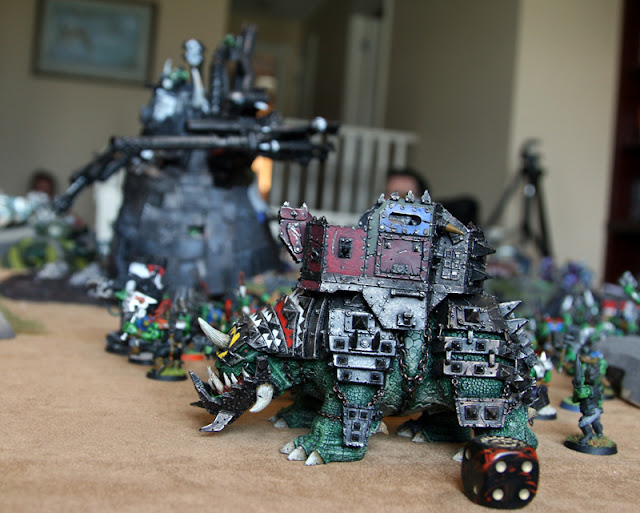 I remain astounded by the modelling skills of my friends. 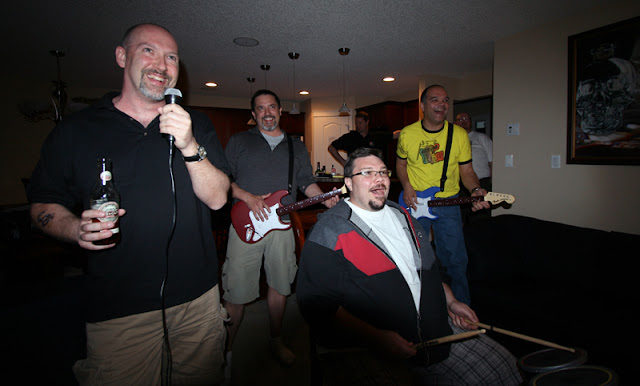 Perennial guest star Dustin Friel dropped in for Rock Band, as he's done several times in the past. Here he is, wailing away on the drums. 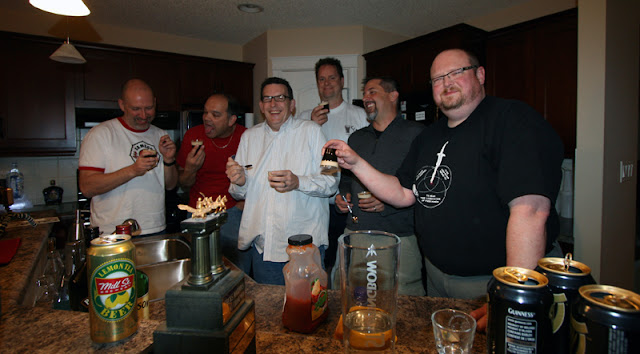 This time around I have very few good images of Rob Day. But here he is at centre, enjoying Guinness Jell-O shots. 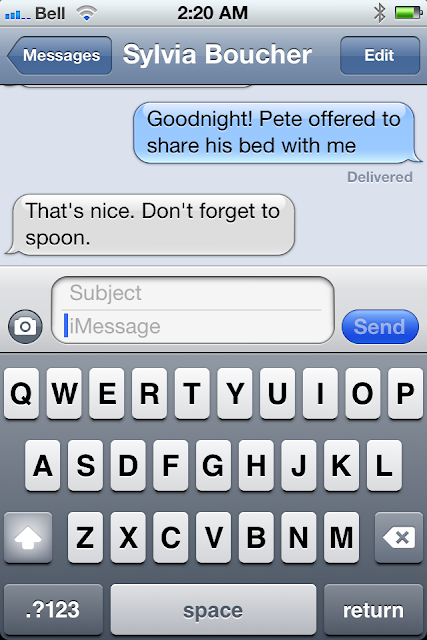 For some reason Sylvia thinks that G&G is merely an excuse for the gang to get together, er, "on the down low," as it were. It's turned into something of a running joke, since the lot of us are almost blandly heterosexual - at least, as far as I know - well, it hardly matters, anyway. Sylvia's gotten rather jaded about the whole thing, as you can tell from her text messages. 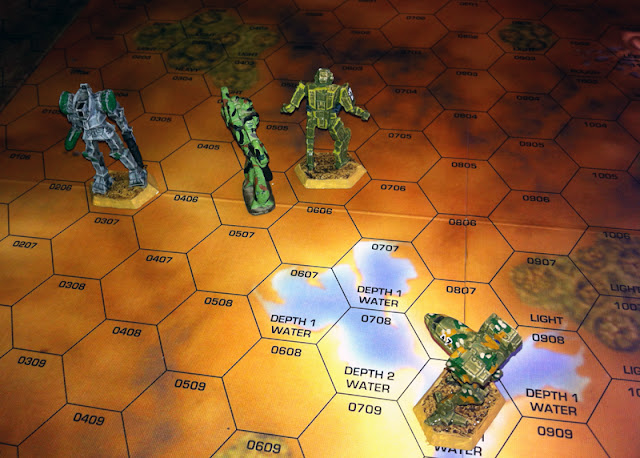 In a true blast from the past, Steve brought over the newest iteration of the Battletech board game we played back in high school. I don't think I've stepped into a giant robot since those halcyon days, and it showed; I spent most of my time hiding half-submerged in a lake. I was ineffective for most of the game, though toward the end I did manage to destroy Totty's mech. The game ended inconclusively overall, though I feel Mike Parlow's team probably would have won the day in the end. 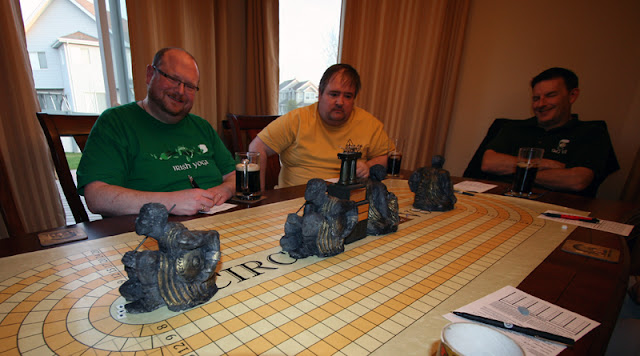 Circvs Maximvs grows more elaborate with each passing year. This year, Pete commissioned his goddaughter to sculpt huge Ben Hur statues for the track. They really add a great deal of grace and verisimilitude to the game! 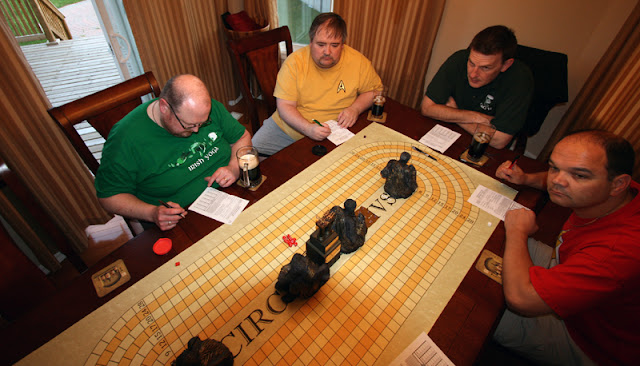 Awe-inspiring. We certainly put on a good show for the new statues, for out of eight charioteers, four were eliminated, with three deaths! 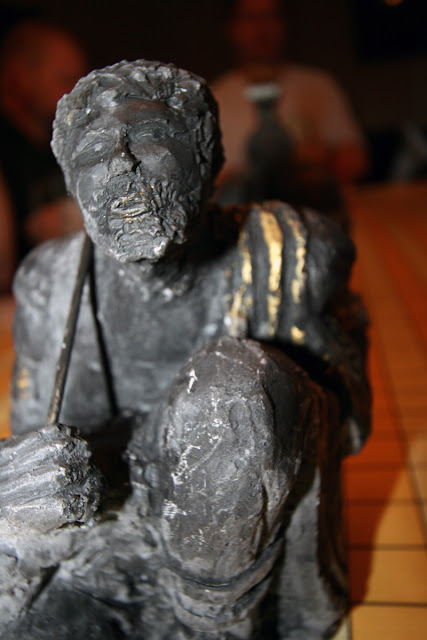 The gods did not smile on the racers this day. 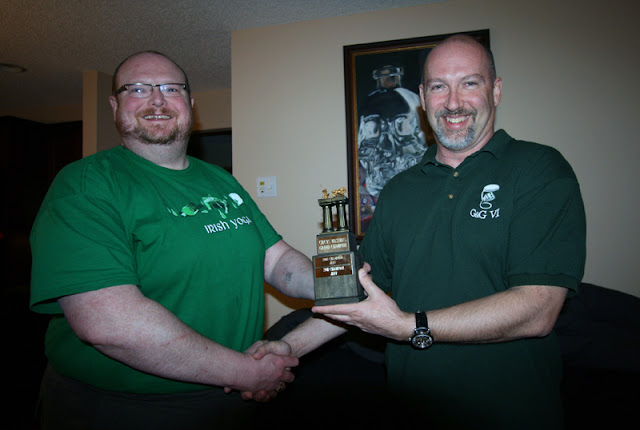 While I held the lead for a brief moment, it was Pete who ultimately prevailed, ending Jeff's victory streak. 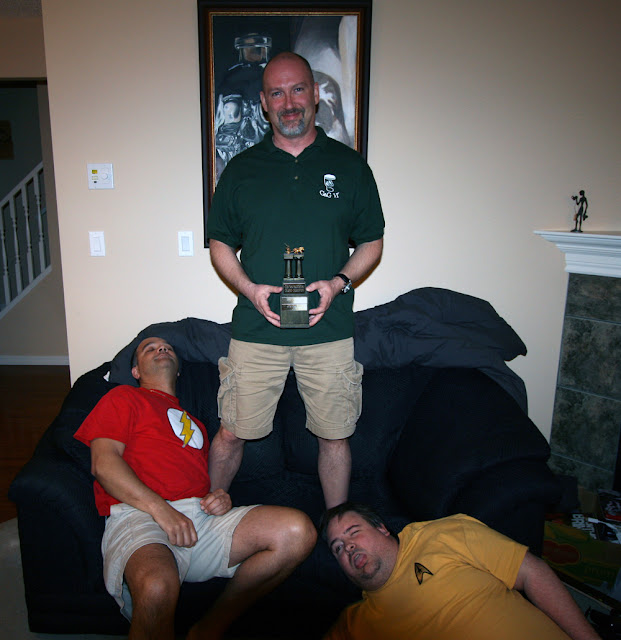 Jeff and I earned second and third place, respectively - and posthumously, crossing the finish line alive but succumbing to the injuries we earned during the race. 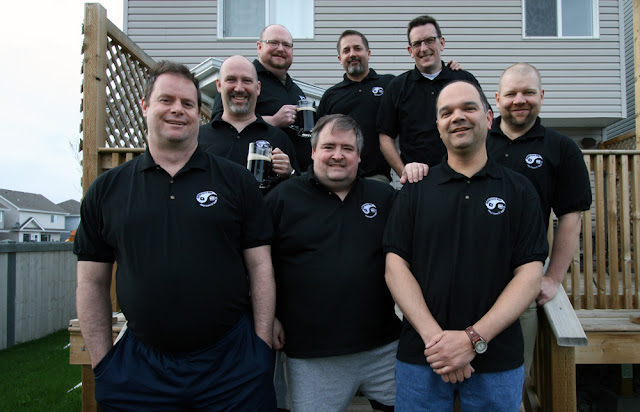 With another G&G under our belts, the anticipation begins for next year's gathering, tentatively planned to be hosted by Rob Day in the nation's capital. It should be quite an adventure! 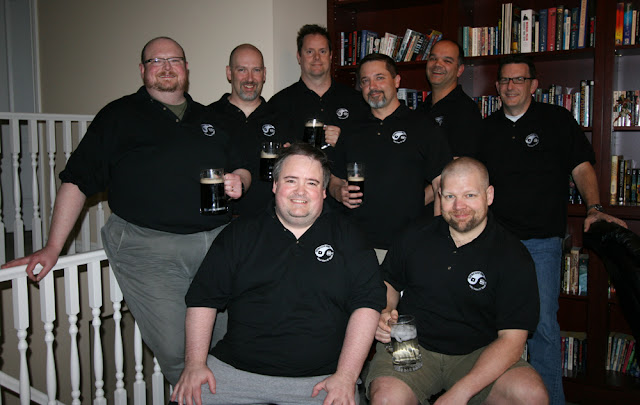