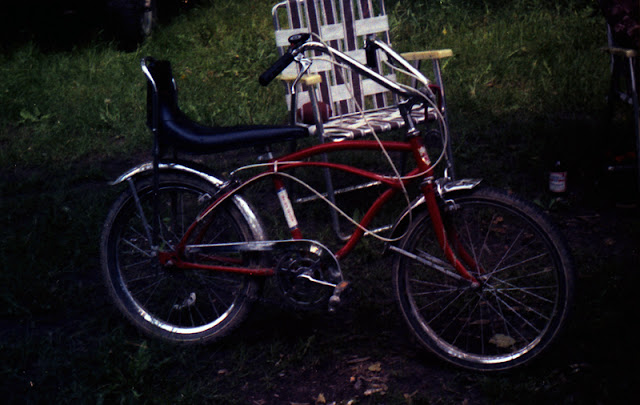 I believe this is the only photo ever taken of the three-speed bicycle I owned for several years in the early-to-mid 80s. This bicycle is infamous for two moments seared into my memory.

One summer day, I met with my friends Paul, Jeff and Vern to cycle around my Leduc neighbourhood. Racing through back alleys was a common enough pastime in those days, careening around blind corners without helmets or padding of any kind. Many knees were skinned, many shins filled with tiny bits of gravel, many skulls bruised. On this particular occasion, Paul, Vern and I wound up far ahead of Jeff and we loitered at the end of an alley waiting for him to catch up.When Jeff came ripping around the corner, I shoved my bicycle forward a couple of feet, directly into his path. Jeff doesn't believe me to this day when I make this claim, but I really meant to pull back in time so he wouldn't hit my bike.

Sadly, my reactions weren't fast enough. Jeff's front wheel slammed into my front wheel. And then the world slowed down. My bicycle spun 90 degrees to the left with me still straddling the seat, giving me a perfect view of Jeff's shocked features as he careened over his handlebars. My jaw dropped as I read the betrayal creeping its way across Jeff's face; he screamed "Whyyyyyyy?" as he flew through the air. Jeff corkscrewed in midair almost gracefully, but landed flat on his back on the hard-packed dirt of the alley. A cloud of dust was kicked up by the tremendous impact, and Jeff's body left an impression in the dirt road, just like a Looney Tunes character.

After we finished laughing, we hastened to make sure Jeff was okay. Fortunately Jeff's body has evolved to absorb tremendous amounts of punishment over the years; his pride was more wounded than anything.

I got my just desserts a couple of years later, showing off for my brother Sean and our next door neighbour Keith, who were outside on the front lawns of our houses. I pedalled to top speed, intending to slam on the rear brakes in the driveway and skid to a stop. But when I angled into the driveway I squeezed the front brake rather than the rear and was flung over the handlebars as the front wheel locked up. I'd begun to scream "Rocketman!" as I approached the driveway; it turned into "RocketmAAAHHHHHHH" as I slammed into the earth, the left half of my body hitting soft grass, the right half hard sidewalk.

The impact left me with a nice set of bruises and it destroyed the bike. The front wheel was bent into a V, the brake lines ripped off the handlebars, the frame twisted. Considering the damage to the bike, I counted my lucky stars that I wound up just a little sore.