Out of Print, Out of Reach? 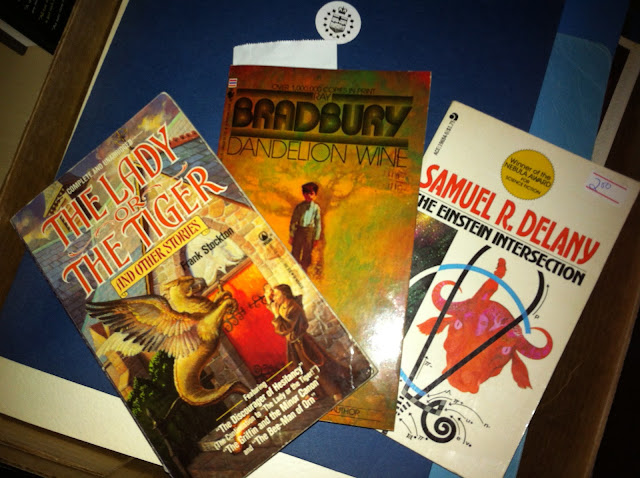 Over the years I've purchased hundreds of wonderful hard-to-find and out-of-print books from used bookstores across North America. Used bookstores introduced me to the sublime madness of 1994: The Savage Report, the adventure pastiches of Philip José Farmer, curiosities such as The Encyclopedia of Bad Taste and Cult Movies,  Edgar Rice Burroughs' Venus and Pellucidar novels and countless others. It took me ten years of searching to find all three volumes of Michael P. Kube McDowell's Trigon Disunity series, but I did it, and the conclusion of that search was rewarding indeed. (It helped that the books were as entertaining and well-crafted as I'd hoped they would be.)

Though I still frequent used book stores, the Internet has fundamentally altered the search for books. These days, I visit used bookstores when I feel like browsing. When I'm searching for something in particular, I use the Internet. Since the early 2000s I've purchased dozens of books online, almost always finding exactly what I'm looking for in seconds. Even long out-of-print rarities can be had at reasonable prices...usually.

But the Internet isn't perfect, and several works still elude my grasp after years of searching. Several of the titles I desire are either unavailable or prohibitively expensive; I'll have to continue prowling used bookstores to find them.

(Surprisingly, Value Village turns out to be a decent haven for used books; I found three today, purchased for the princely sum of $2.17.)

Recently my parents visited the world's biggest used bookstore in Portland, Oregon, but even they couldn't dig up the titles on my most-wanted list. So if anyone sees the following titles in their travels, please alert me:

By all accounts none of these are literary masterpieces (though the Schow book, I'm told, is a solid critical work), but I've been curious about them for some time. I read Logan's Run at the public library in Leaf Rapids, but I've never seen the sequels on sale; Sean lucked out and found Logan's Search a couple of years ago. The three Caidin books are the second, third and fourth novels about Steve Austin, cyborg, known on television as the Six Million Dollar Man. I own the first Cyborg novel, but the others continue to elude me.

Even if I never stumble across any of the works on this short list, the search will guide me to other, perhaps even more obscure but intriguing books. I'd certainly never have read the bizarre but somehow compelling The Second War of the Worlds if I hadn't been searching for something else entirely, and I feel all the richer for it...somehow.

I experienced Logan's Run somewhat backwards, coming across the television show first, then the movie and lastly the book, courtesy of the Leduc Public Library. I would love to re-read it, if for nothing other than the trippy world-building details, like the 90+ verse 'Sandman Hymn' Nolan cites, and the six distinct loads of their sidearms: Ripper, Needler, Homer, etc.

I have Schow's Outer Limits Companion, but it appears to be the first edition, not second, or I would set you up with a trade!

I came at Logan's Run backwards as well - first via an issue of the comic book adaptation of the film. I then read the book - the sidearm loads figure heavily into my memories, too - and probably ten years later I saw the film. I've never seen the TV series, though it's finally out on DVD as a manufacture on demand release.

Now that I think about it, I'm pretty sure I've read the first edition of the Outer Limits Companion - I think Ron Briscoe had it in the Ron Room of the Bleak House of Blahs. The second edition commands steep prices on Amazon!

Logan's Run... good luck with that. The Holy Grail of SF libraries that one is, although possibly finding a real Holy Grail for your reading room might be an easier task. Maybe they'll re-print it if the movie reboot ever comes out. I very vaguely recall rading the book, but maybe it was a novelization of the movie. Whatever the case, not much sticks in my mind. It might be cheaper to get memory autoregression with Dr. Heinz Verber to see if I can recall the book than it would be to track down an actual copy. Or it might be faster to write it myself.

My one used book look-up would be the novelization to the "Blues Brothers" movie. Although I am pretty sure I can order it online, I'd like to be able to just find it in a bookstore. It was remarkable for not possessing the rights to any of the songs in the movie, so it just skips the music, which is a bold move for a book about a musical. I'd also like to get the Scott Turow hardcover novel that has the printed map of Kindle County.

Actually, some other books I'd like to see are comics, despite that I do not collect them: the Marvel Star Wars book with the crappy art and the giant pages, the Blade Runner movie comic, and the Alien movie comic. I heard that one was just now re-released hardbound with improved hi-def scan and print on acid free paper. Too rich for my blood, though. If people bought more art, maybe I could afford it in the future! I do own the Star Wars book, but it's not exactly in mint condition and I am afraid to try opening it after all these years.