Yesterday Sean and I met to skirmish in the Romulan Neutral Zone. In our first engagement the USS Excalibur faced off against an unknown Romulan warbird. But as seen here, the Romulan cloaking device made it very difficult for Excalibur's gunners to draw a bead on the enemy. 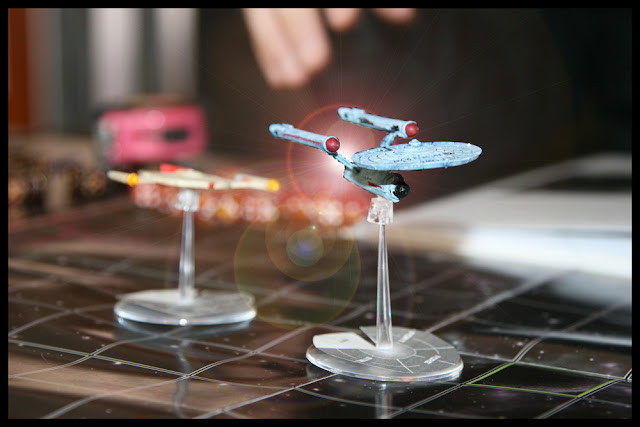 Having faced the deadly Romulan plasma torpedo in the past, the Excalibur's captain knew that he mustn't get too close to the foe. But the dastardly Romulans used their cloaking device to slip past the stalwart Federation ship and attack from behind. Crippled by a plasma hit at close range, the Excalibur had no choice but to go to emergency warp and cede the field of battle to the Romulans.

Somewhat humiliatingly, this retreat represented my best effort yet in Starfleet: A Call to Arms; at least my ship survived the confrontation. But victory awaited...
Posted by Earl J. Woods at 6:44 pm