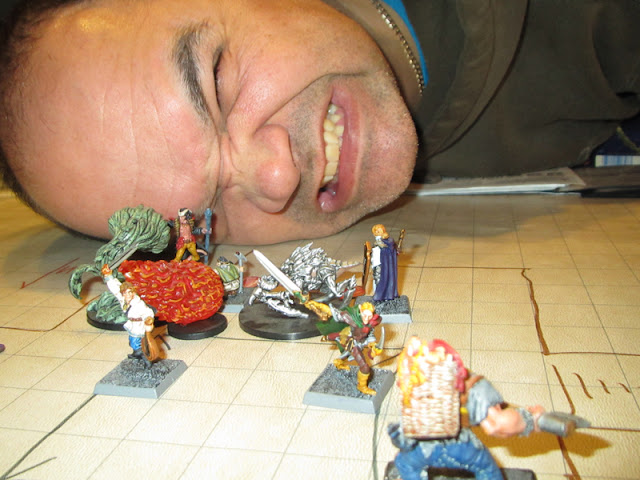 Last night I noted that Jeff Pitts and his Dungeons and Dragons character Rilion share one important trait: both have a lot of hit points, and both lose them with astonishing regularity. And yet no matter how brutal the accident/beating, Jeff and Rilion always bounce back from unconsciousness to fight another day.

Background: Jeff slams his head into the table. Foreground: Jeff's character Rilion, with sword, faces off against a two-headed head-collecting ettin, with axe. 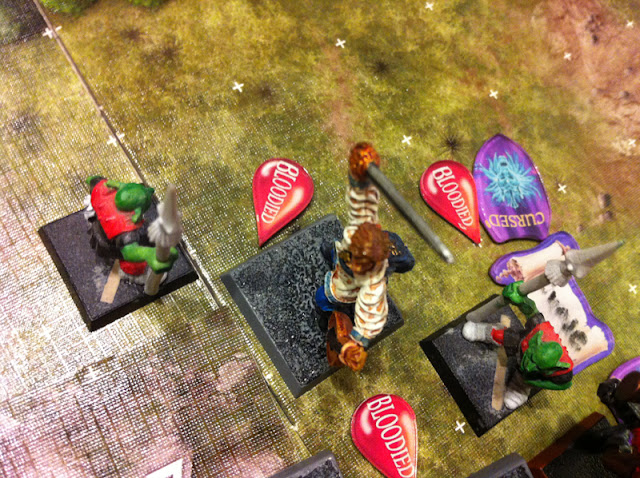 A little earlier in the evening I sent Sylvia this image of my character Timbre fighting off a pair of hammer-wielding dwarves. They were part of a dastardly ambushing party who jumped us while we were searching for the pyramid of...uh, I forget, I wasn't the one taking notes.

"Your little man needs to stab more people," she texted, capturing the essence of the game in just a few words. I did my best, but as a bard I'm more about the lute (seen here in my left hand) than loot (ing bodies).

It had been four months since we last played, so a few of us couldn't remember where we were or what we were doing - Dungeons and Dragons campaigns are like that sometimes. "Do we have horses?" Pete asked, scanning his character sheet.

"Yes we do," I answered. "And I even named mine: Half-Note. It would BEHOOVE you to do the same," I quipped.

The chorus of groans was music to my bard's ears.
Posted by Earl J. Woods at 8:00 pm

You forgot to mention your triumphant punching away the pencil Stephen threw at you.

Oh yeah, my ninja move! That was pretty amazing, all right. And totally on purpose.

A no-holds bard night of knights.