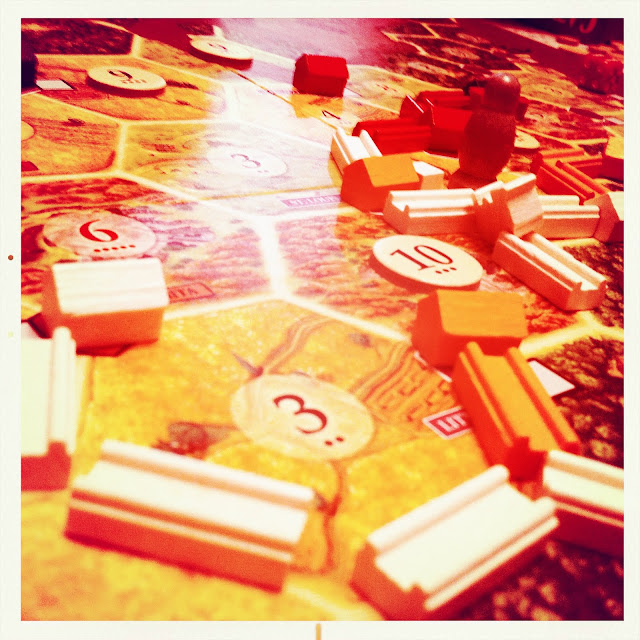 I visited Sean today to play board games, emerging victorious at Railways of the World and Puerto Rico but losing very badly to Jeremiah Pitts at Settlers of Catan spinoff Settlers of America. Despite being confined to a static map of the lower 48 U.S. states, I think I enjoy Settlers of America more than the basic version of Catan, though not as much as that game's Seafarers expansion. Whereas the original Settlers encourages players to rack up points via building cities and roads, the object in Settlers of America is to deliver all of your goods to competitors' cities, a dynamic that requires a lot of planning and investment. "Go West, young man," is essential advice for winning this game - advice I could have used instead of building cities on the Gulf and east coasts.

Of the three new games we tried today, though, I think Puerto Rico is my favourite. Sean's anniversary edition includes high-quality playing pieces (such as "doubloons" made of real metal coins) and gorgeous artwork on heavy card stock. The game's rules are elegant and easy to learn, requiring players to choose a role (settler, captain, mayor, prospector, etc.) each turn to develop his or her island and promote economic growth for the colony as a whole. More often than not, your choice of role will benefit your competitors as much or more than yourself, but if you're clever you can choose the right role at the perfect moment for yourself and the worst possible time for the other players. This is a gorgeously rendered, very rewarding game.
Posted by Earl J. Woods at 9:01 pm

Puerto Rico was my favourite, as well. Nice balance of cooperative and competitive play.

Regarding Settlers of America, I wish it had more victory conditions than just "whomever delivers his/her goods first, wins."

I'd like to see a more traditional victory point set up. Perhaps points for:

Things like that, and using a set number of turns.

I did still enjoy the game, however.