How Fortunate and Glorious! 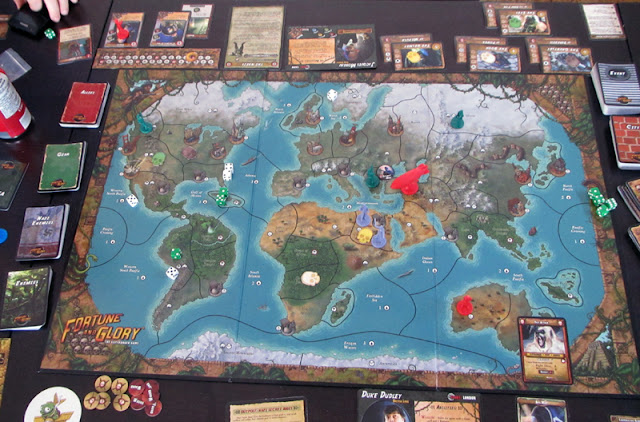 Sean bought me Fortune & Glory for my birthday, and today we tried out this game of 1930s derring-do for the first time. It's the perfect game for anyone who loves Republic serials and pulp adventure.

Each player in the game takes on the identity of a hero or heroine and attempts to gain fortune and glory by exploring ancient ruins and discovering valuable artifacts. Along the way, they'll face dangers such as deadly snakes, zombies, Nazis, mobsters and other nefarious menaces. In a competitive game, each player races to accumulate as much fortune (gold) as possible. In a cooperative game, players work together to defeat either the Mob or the Nazis, who of course are trying to take over the world. 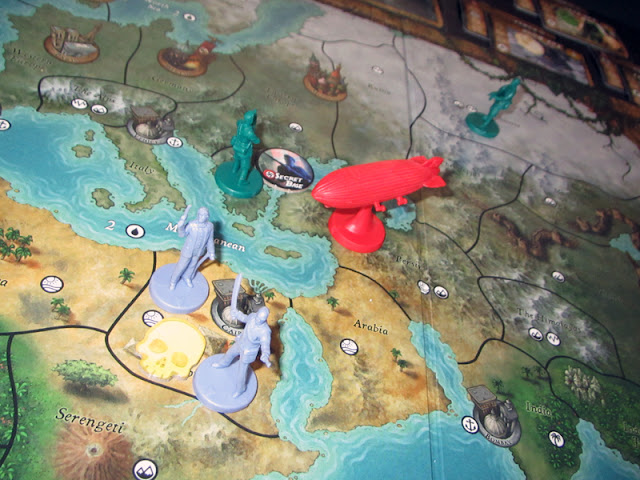 In our first cooperative game, Sean and I randomly chose the characters of Jacques Moreau, a tomb raider, and Duke Dudley a British Lord. Each character has special attributes and abilities that will influence the player's approach to winning the game. Duke, for example, starts the game with one Fortune (represented by a plastic gold coin) and one piece of Gear, chosen randomly from the stack of Gear cards. I wound up with a bullwhip, useful as it adds +1 die to combat rolls. Here, Duke and Jaques meet up in Egypt, where we attempt to find the Helmet of Medusa. Each artifact has a danger level associated with it; in this case, we had to pass three randomly chosen Tests, or challenges, before securing the artifact. Unfortunately, we failed to discover the secret of the Ice Caves, represented by a randomly drawn Danger card, and our failure compelled us to flip the card over to reveal its accompanying Cliffhanger result: 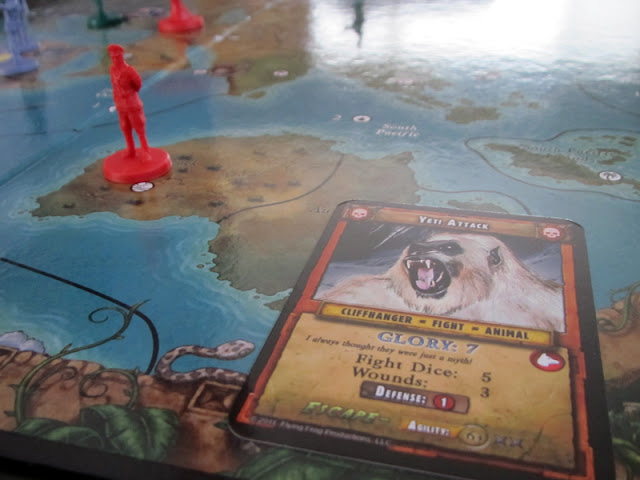 Yeti Attack! But just as in the old movie serials, cliffhangers aren't resolved right away; you have to wait until your next turn. It's a great mechanic that adds a lot of suspense and fun to the game.

Meanwhile, the Nazi villains (represented by red figures) were successfully retrieving artifacts, earning infamy on the Villain Track and moving them closer to global domination. And all the while the Nazi Secret Base and War Zeppelin were depositing soldiers across the globe.

Sadly, Sean and I were overrun in our first playthrough, securing only one artifact before the bad guys took over the world. But we played enough to obtain a solid grasp of the rules, which was our chief goal today.

Fortune & Glory is a fun, fast-paced game of strategy and high adventure. It was great fun with two players, and I have to imagine that it would be even more riotous with more adventurers. The wide assortment of Adventure, Artifact, Gear, Villain, Location, Event and other cards provide immense replay value - no two adventures are the same. Supports 1-8 players - yes, you can play solitaire.

Quality board, components and cards, too.

8 players? That screams for a gaming night, if not G&G>

I almost bought this but I was a bit put off by setup and playing times...and the fact that I was sure you would get it. What would you estimate a 6 player game running?

I couldn't say for certain how long it took Sean and I to play...well, then again, I think I can estimate. We played one competitive and one cooperative game in the span of about four hours, and that includes first-time setup and a lot of back and forth over learning the rules and so on. Given experienced players who know what they're doing, I'd guess that a six player game shouldn't take much more than a couple of hours, but that's really just a wild guess. All I can say is the game feels pretty fast-paced.