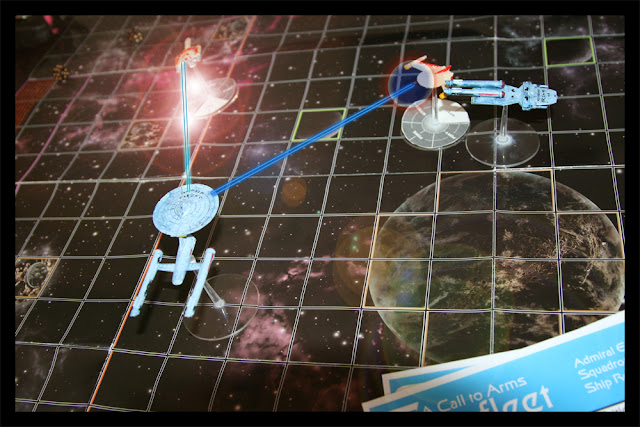 In our second of two Starfleet: A Call to Arms skirmishes on Friday, Sean and I fielded two ships apiece: two still-unnamed mid-size Romulan cruisers versus the Federation's USS Encounter and USS Eris. For the first time we tried one of the scenarios included in the rule book, a rescue/salvage mission with victory awarded to whichever side has the ships with the most point value within six inches of the target derelict. In this case we put the crippled USS Edmonton in orbit of Belcanto to serve as the prize. The Encounter was wiped out in the opening salvo, leaving the Eris to fight two ships on her own. It didn't look good for the Federation. 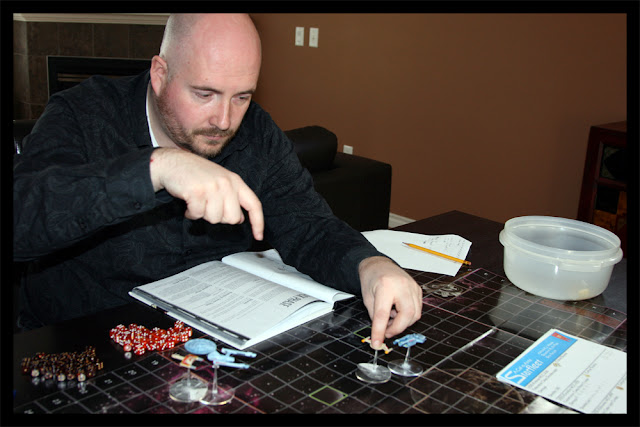 Fortunately, luck was with me when it came to the crucial initiative rolls and critical hits. I managed to destroy the cloaking device of one of Sean's ship's and chased her down immediately. 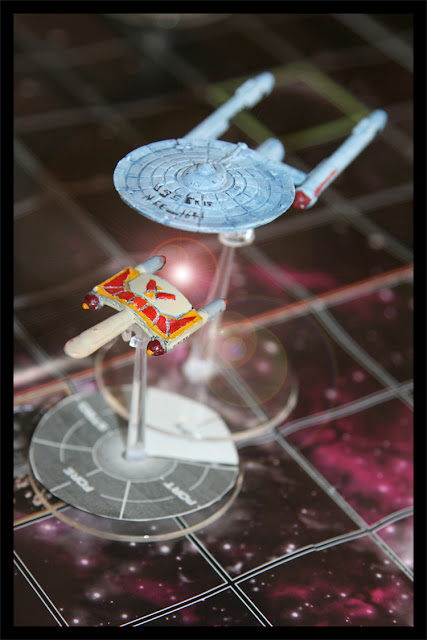 As the crippled Romulan scout fled, Eris unloaded all her forward weapons, causing a chain reaction sensors revealed would lead to a massive explosion in seconds (or, in the real world, by the end of the next movement phase). Eris heeled hard about and escaped the shock wave (yes, there are no shock waves in space).

The Eris and Sean's remaining ship exchanged fire a couple more times, but since this scenario was limited to eight turns and the Eris was worth a few more points than Sean's vessel, I was able to claim victory for the first time. Huzzah!
Posted by Earl J. Woods at 8:01 pm

Excellent report, and a nice playfield to boot! (Or was it photoshopped?)

No, the playfield is from the Star Trek HeroClix game. It's not really large enough for A Call to Arms, but better than a blank table.

Did you want a bigger field? I don't think it would be all that taxing to design one, and the printer I work with is happy to print anything on anything. A large-format print would be easy to print, and could be sent to you in a roll-up mailer.

I would even do it at-cost if you promised never to use the Photoshop lens flare effect ever again! Smiley-faced emoticon goes here.

Normally we use Steve's very large starfield, but when I'm employed again I might just take you up on that, Jeff.

Since I don't know how big Steve's VLS (Very Large Starfield) is, if you give me the dimensions you want, I will take a stab at it, like whenever, but at least that would be a first step.

My vinyl starfield mat is 4' x 6'. i know some folks with large format printers have made snazzy playing surfaces by printing off an appropriately scaled Astronomy Picture of the Day.

Looks like vinyl is the way to go all right. The rich black that you need for a superior print works only on a very few paper stocks that can be printed to that size. If you go the paper route, then I'd also reccommend lamination, and by the time you laminate a board that size, the price of scrim-backed vinyl is right there.

APOD is an awesome site and one of my favourites, but with all due respect to the billions of NASA dollars that went into those images, your friendly neighbourhood graphic artist can make it look even better!