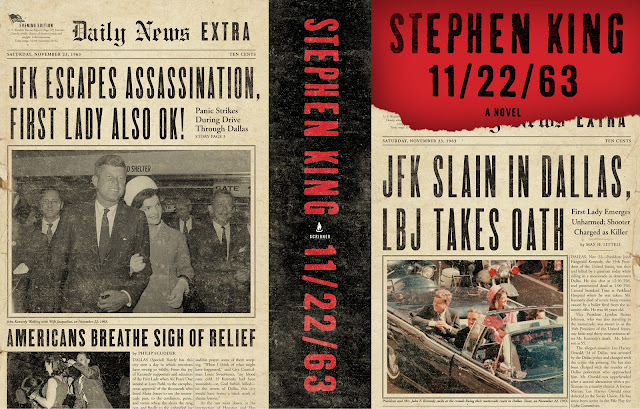 This review contains SPOILERS for Stephen King's latest novel, 11/22/63. Read no further if you have yet to read, or have interest in reading, this book.

Stephen King's latest novel, 11/22/63, is a suspenseful, melancholy fable that uses time travel to explore not merely a bygone era, but the evolution of culture, the ephemeral nature of love and happiness, and the struggles of those who live on the fringes of society. It's the most satisfying novel King has written in years.

The story's hook is simple: Jake Epping, a thirty-five year old high school teacher from Maine, is told by his friend Al that Al's diner contains a time portal to 1958. For years, Al has been using the time portal to buy fresh hamburger for his restaurant, earning huge profits with each burger sold (meat was much cheaper in the '50s). But Al begins to think that perhaps the portal could be used for a more noble purpose: to prevent the assassination of President Kennedy. Unfortunately, Al comes down with lung cancer before he can complete the task, and asks Jake to continue the mission. Rocked by a recent divorce and compelled by the possibilities, Jake agrees.

Every writer approaches the rules of time travel differently. In this case, those rules are simple: stepping through the portal from 2011 to 1958 will always bring you to the exact time and place in 1958, not a second sooner or later. When you step through the portal in the opposite direction, from 1958 to 2011, only two minutes will have passed in 2011, no matter how much time you've spent in the past - whether it's five minutes or five years. In other words, if you need to do something in 1961 or '62 and you mess up, you can't just travel back to that point - you have to start all over again in 1958, growing older by living in the past while time crawls in 2011.

Despite these limitations and risks, Jake makes the leap into the past and explores the possibilities of time travel by righting a couple of local Maine wrongs: he saves a girl from being accidentally paralyzed and prevents an act of brutal domestic violence in Derry, a fictional Maine town King fans will remember from It and other King novels and stories. King tosses in a few easter eggs for said fans, including a short scene featuring a pair of important characters from It along with other surprises. King takes his time in getting to the actual assassination plot; Jake spends years in the past, setting up a new identity, building a new life for himself, investigating Lee Harvey Oswald's movements and connections (he wants to be absolutely sure Oswald was the only shooter) and even finding romance.

King's depiction of the late 50s and early 60s is rich, vividly painted and well-researched, nostalgic while recognizing the less appealing elements of that era, chiefly poverty and racism. Jake marvels at the rich flavour and texture of the era's food, enjoys the fresh air and lack of paperwork while suppressing his 21st century disgust at the prudishness, sexism and racism of the era. Jake finds a teaching gig in a Dallas suburb, splitting his time between teaching, a budding romance with the school librarian and stalking Lee Harvey Oswald. But the past isn't eager to be changed, and Epping finds that the fabric of history itself isn't on his - or Kennedy's - side...

Generally speaking, this is the best King novel in years, with excellent characterization, a compelling story and, for once, a satisfying ending, one of King's weaknesses at novel length. I am a little disappointed that King, here writing a science fiction tale rather than a horror story, still manages to fall into one of the more troubling tropes of the horror genre - punishing female characters for having sex. While the act makes sense within the context of the novel, it remains vexing. While King is a liberal, he's used to writing in a fundamentally conservative genre (horror), so some of those tropes are bound to seep into his other work, I suppose. It's the one true black mark on an otherwise superlative effort.

11/22/63 ends with a riveting moral conundrum for Jake, one that will leave readers wondering which choice they would have made in the protagonist's circumstances. Here again, though, the conservatism of the horror genre makes its impact felt in this nominally science-fictional work; it turns out that altering the past has apocalyptic consequences. Readers hoping for an in-depth exploration of what the world might have been like had JFK escaped his fate will be disappointed; what King gives us is interesting, but not nearly as detailed as alternate history buffs would have preferred. That isn't the story King wanted to tell. Despite its title, this isn't really a story about Kennedy or politics or even time travel; it's a story about finding your place in the world, dealing with loss and seizing whatever happiness you can in a hard, cold world. And on those terms, 11/22/63 is immensely satisfying.
Posted by Earl J. Woods at 5:00 pm