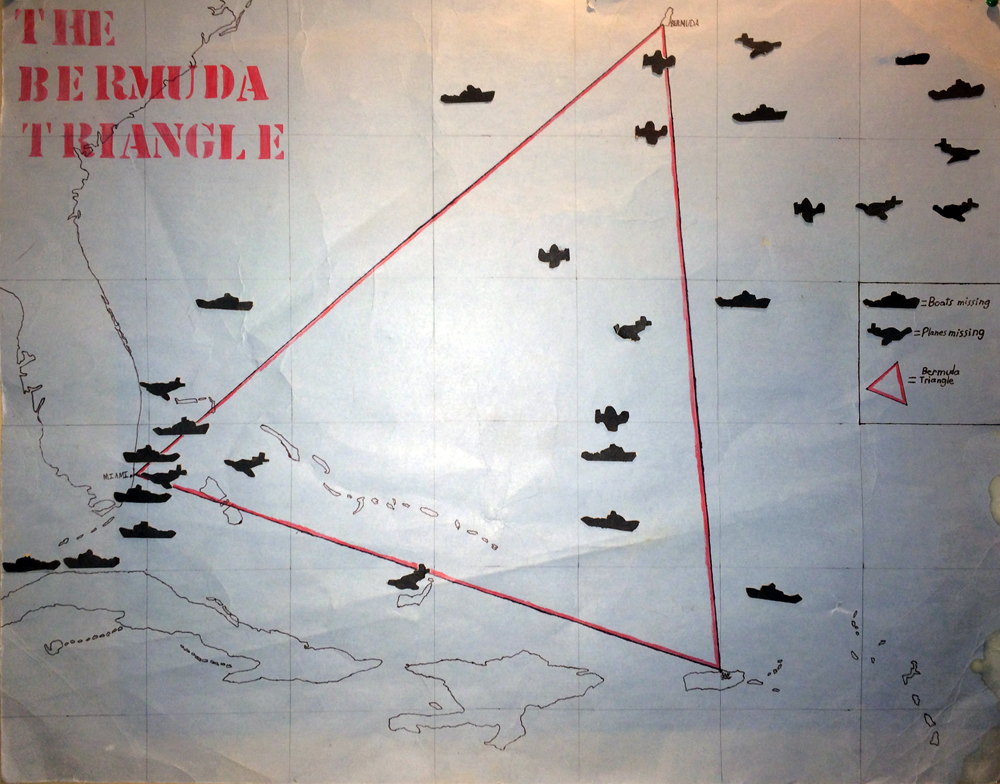 Sometime in grade six or seven I created this poster of the Bermuda Triangle, complete with locations of ships and plans that supposedly went missing in or around the Triangle. Amusingly, even my then-credulous pre-teen research concluded that even if a bunch of ships and planes had gone missing in the Caribbean and mid-Atlantic, most had been lost outside the boundaries of the phenomenon. I must have spent a lot of time on this, because the coastlines seem pretty accurate and clean to me; it looks as though I marked out gridlines and then drew in the bits in each square. The ships and planes were cut out of black construction paper and glued onto the map.
Posted by Earl J. Woods at 12:01 pm

Dear Earl: How cool. I published a book two years ago on the discovery of three of the planes from Flight 19.

What are the ships and planes in your list -- I'd like to do stories on more 'lost' planes in the triangle.

You rule a straight line from the tip of the Florida keys out towards the Azores and you not only cross through the Bermuda Triangle but also you draw the long axis of the Sargasso Sea. The overlap of the Triangle and the Sargasso is where the largest cluster of your events lie.

So, you have an array near the shore, which would be consistent with early-voyage mechanical difficulties that happened too far from land to be recoverable. The Sargasso cluster is more troublesome, perhaps. You do have operations along older sea lanes that depended on the Azores, coupled with the swirling warm currents of the Sargasso, renowned for its surface biodiversity and the subject of many Fortean events.

Either way, disaster at sea is always compelling and horrifying. Solving the puzzle goes a long way to providing some closure on these stories that have equal parts personal tragedy and technical mystery.

My late grandfather was heavily into Rosicrucian research, including Lemuria and related topics. I am certain he would have a lot to say about the paranormal aspects of the Bermuda Triangle. I cannot say if those texts do justice to the losses at sea, but the most moon-baked UFO buffs as well as the most hardened skeptics can both point to the discrepancy between what we know of these events and what must have truly happened.

Douglas: I'm afraid I no longer have any of the other materials that accompanied the poster, and the information has long since escaped my feeble memory. Sorry about that, but congrats on the book! Very cool.

Jeff: There's a pretty wacky book by Martin Caidin (creator of the Bionic Man) about the Bermuda Triangle. It mixes equal parts hardheaded aviation science with the paranormal aspects you mention. The ending really comes out of left field. I'm afraid I can't remember the name...Three Corners to Nowhere, maybe? Something odd like that.

Sweet maple syrup! That's got to be the best title for a Bermuda triangle book ever. I looked it up online. IT EVEN HAS DR. RUDY WELLS crossed-over from The Bionic Man! I can get it used from Amazon for $0.01 - but 7 bucks shipping, argh. Well, I will haunt some used bookstores, you never know