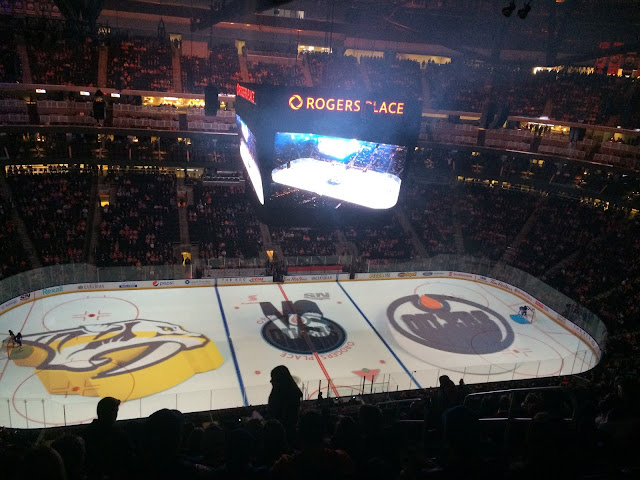 Thanks to the generosity of my employer, I was able to enjoy (in my own particular manner) my first ever NHL hockey game. I'm not a sports fan, but I was certainly impressed by the spectacle of (taxpayer-subsidized) Rogers Place and all the high-tech tomfoolery that surrounds the hockey game itself. The scoreboard hanging over the ice is massive, with utterly spectacular resolution; I marvelled at it the whole game. Technicians can project whatever they want onto the ice, such as the team logos seen in this image. During the game I suggested to Sean that a clever coach would project additional hockey pucks onto the ice to confuse enemy players. I'd laugh and laugh!

Seeing a game live has not transformed me into a hockey fan, and as ever I feel sad that I can't share the heightened emotions of the real fans as they watch. As with my apathy toward children and pets, I seem to be lacking certain common human instincts. Instead, I find myself analyzing the non-stop assault on the senses that occurs during the game; except when the players are actually playing, music blares from all sides, animation lights up the rink and the electronic billboards circling the stands, and propaganda films play on the scoreboard. Indeed, the hidden ringmaster exhorts the crowd to "GET LOUD" at various points during the game, and the crowds dutifully agree. I was reminded yet again how easy it is to manipulate crowds with words, images and sounds. We are so easily programmed, and I'm certainly not excepting myself; I just respond to different programming languages.

Part of me realizes this is all (relatively) harmless fun, but another part of me sees in this kind of event a more refined version of the old gladiatorial arena. I guess you can call this progress, though, as no one dies and the violence is punished rather than rewarded (textually; the subtext is something else again).

I'd never willingly pay to see a hockey game, but I'm glad I had the opportunity to see one simply so that I can better understand what moves other people.

As is usual, your comments are astute. It's interesting to see someone with your acute level of insight address a Canadian cultural touchstone with the wide-eyed wonder of the initiate.

Most of the NHL games I've attended were in what I would call "brick, wood, and ice" rinks, and not the TRON-like magical wonders we have these days. Gretzky-era hockey, when the players skated freely and weren't coccooned in body armour, weilding carbon-composite sticks that when broken and replaced would individually equal the cost of my food expenditures for a month. The fans wouldn't be pacified by megascreens, stat injections and lasers in the cornea just to make it through the game.

Old-time hockey, coach. Absolutely, the players before Gretzky generally did not have the conditioning, finesse, dexterity, or control of today's crop of youngsters. The game was played on glaring white ice with massive mercury-vapor lights as big as bank safes hanging over the rink. Entertainment came from an organist, fights (on the ice and in the stands), and beer, unless by some miracle your home team was any good.

NHL hockey these days is equally about show and money. The kids that play are as valuable and expendable as exquisitely-crafted chess pieces, and are allowed as much leeway in their play strategy as a rook would enjoy when fingered by Kasparov. I'm surprised you managed to find any sport at all beneath the glitz factory.

As you probably won't be back in the rink for a while, I strongly suggest hockey movies:

Slap Shot, of course, the classic. The hockey cinematography set a high standard for sports films and stands up well even now. The excessive violence rings true. The note-perfect sardonic tone that sustains from the first frame to the very last. Most of all, though, Slap Shot is an unparalleled clinic for screenwriters on exactly how to craft dialogue.

Goon, the spiritual successor to Slap Shot, even more cinematic, violent, and sardonic. But also more Canadian, and extremely sweet once you get to know Dougie Glatt. Possibly one of the truest fictional sports films ever made.