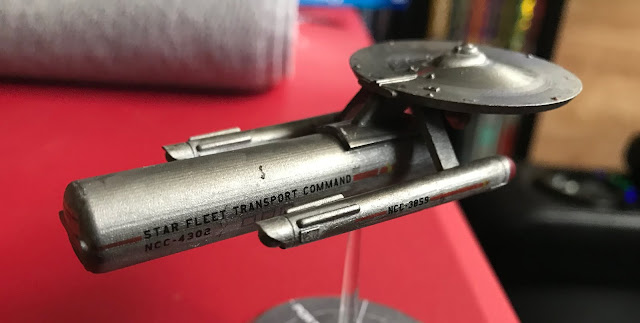 Many old-school Star Trek fans will remember one of the early in-universe "non-fiction" Star Trek books, the Starfleet Technical Manual by Franz Joseph. Joseph's book included several non-canonical Federation starship designs, the first fans had ever seen that didn't look like the Enterprise. One of those designs was the Ptolemy-class tug, seen here painted by me with decals now firmly in place. This one's called the USS Encke, the name taken straight from the Technical Manual.

I'm quite happy with how this model turned out. The paint is pretty even, and I managed to position the decals pretty close to where they should be.

Why does the large cylinder have a different registry number than the main body of the ship? Because this is actually two different ships: the tug, which consists of the main hull (the saucer), the warp nacelles, and the spine extending downward to the cylinder. The cylinder itself is an independent sublight starship, an unnamed passenger liner. This is one of the configurations Joseph illustrates in the Technical Manual; the tug can also carry cargo pods, and I'll post a second version of the Encke to demonstrate tomorrow.
Posted by Earl J. Woods at 3:10 pm

I'm fairly certain the passenger ship is the Allan J. Sampson, named after the famous 2000's-era Earth author who rewrote "Dune", you know, to make it better and all. Trivia: Sampson was also wrote the pilot for the re-booted "Gilligan's Island" which finally was produced in the 23rd century on account of its dense complexity of theme and character - it took a team of AI and expert lexico-historians (and their generational families) that long to bring it down to the level understandable by the common viewer.