Close Encounters of the Ghostwritten Kind 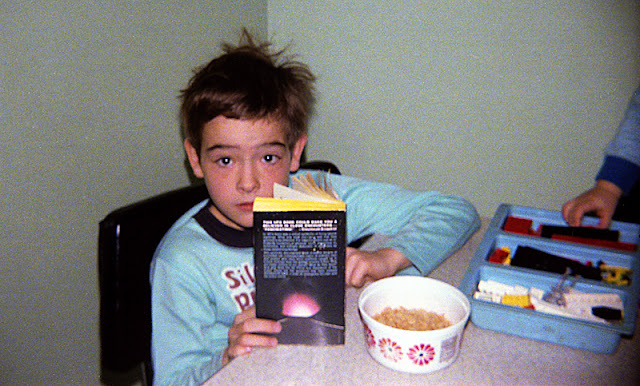 Here I am sometime back in the late 1970s reading Steven Spielberg's novelization of his screenplay for Close Encounters of the Third Kind. A lot of folks assume that this novelization was actually written by one of the world's most famous SF ghostwriters, Alan Dean Foster, the man who really wrote the Star Wars novelization (credited to George Lucas), among others.

I honestly don't remember Close Encounters well enough to say if Foster wrote it, and I no longer own a copy of the book to check the style. I am certain, though, that Foster did not novelize Star Trek: The Motion Picture, attributed to Gene Roddenberry. That book is just too loopy to be Foster and just loopy enough to be genuine Roddenberry.

With my book, bowl of cereal and collection of Lego bricks close at hand, I imagine this must have been a happy moment. It appears as though one of the Lego trays contains some kind of silvery, robotic action figure as well as the bricks you'd expect. It's too bad the photo isn't quite sharp enough to identify the figure.
Posted by Earl J. Woods at 7:08 pm

Amazing what the mind remembers after all those years.

Never knew anything about the ghostwriter(s), but not so suprising, either.

Hey Earl;
You are correct: just as with the ST:TMP novelization, I likewise had nothing to do with the novelization of Close Encounters.

Thanks for the authoritative answer, Mr. Foster, and for many hours of entertaining reading!

The novelization for Close Encounters was actually ghostwritten by Leslie Waller, although Spielberg himself did make edits so that the finished work more closely resembled the screenplay/film.

Thanks for the lead, Tim - I'm always curious about these little mysteries.