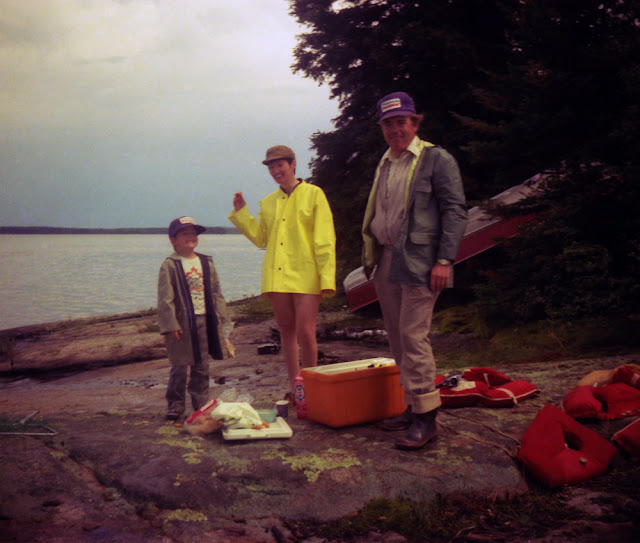 It's funny how the mind stores some memories firmly and allows others to slip away. I certainly remember the Purolator hats Dad and I are wearing, along with the orange cooler and Dad's rubber boots. I've forgotten the life jackets, though; the ones I remember were yellow, filled with segmented rectangles of foam.

Judging by the other photos included in this set, this shot was probably taken near Leaf Rapids by either my grandmother, her friend Val Head or our cousin Hugh Woods. Perhaps the Super 8 mm film that must have been shot on this trip (note the camera sitting atop the life jacket near Dad's feet) will offer more clues.

We often boated on the many lakes and rivers in the area. I wasn't a big fan of fishing, but I did love it when we went fast on choppy waters, bouncing on the waves. Once I made the mistake of reaching out to grab a cattail as we passed, and one of the plant's leaves gashed a deep cut in my palm. The pain was sudden, sharp and shocking. I never tried that again.

Once - perhaps on this very trip - I pointed to the anus of a fish we'd caught and asked what it was.

"That's it's asshole," Hugh said. "If you touch it, you'll die." I believed him, and my already strong aversion to touching live fish doubled. Oh, how I loved the meat, though - nothing in the world tastes better than the pickerel of northern Manitoba grilled over a fire.
Posted by Earl J. Woods at 6:06 pm