Journey to the Edge of Nowhere, Part I 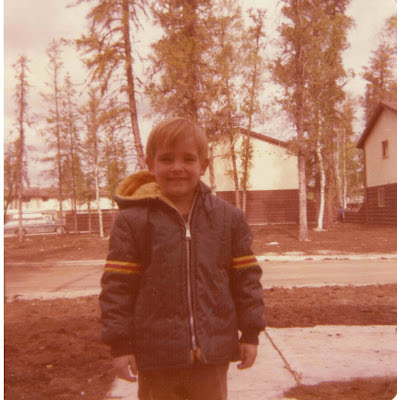 I grew up in northern Manitoba. Born in Flin Flon, moved to Thompson, then to a tiny mining outpost called Leaf Rapids, a place that rested uneasily within a vast expanse of thick boreal forest. A hundred kilometres from the closest human settlement, thousands from any large city, it was a town on the edge of nowhere.

My parents, brother and I left Leaf Rapids in 1979 and came to Alberta. Last year, I went back. 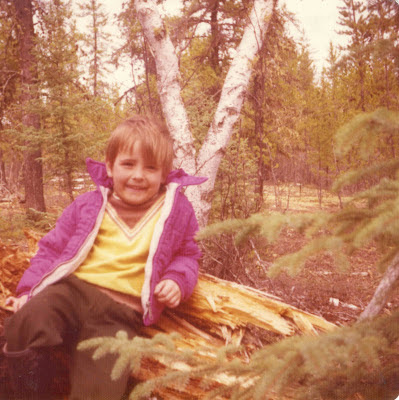 On the outskirts of the Sinkhole.

Leaf Rapids isn't exactly the world's hottest tourist destination, except for a few American hunters and fishermen who come up every summer. So why go back? 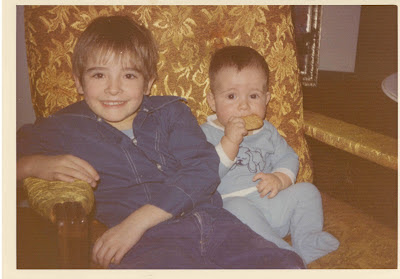 Earl and Sean Woods at 8 Churchill Place in Leaf Rapids. Note the 70s decor.
I'm not an outdoorsy type. I'm content to stay comfortably indoors, in a climate controlled environment, curled up with a book. And yet, the woods in Leaf Rapids were so huge, the silences so deep, the topography so alien that I still dream of the place. The isolation was profound - one small shopping mall, a few dozen houses, some scattered businesses and utility buildings, surrounded by nature that was utterly ancient.

At first, you couldn't even drive to Leaf Rapids; we had to fly in. A timber wolf chased me to school once. The school gymnasium backed onto the town's movie theatre, and nearly every business establishment, as well as the curling rink, hotel and town offices, were crammed into the Town Centre. The dragonflies were as large as birds, at the scale of my preschool size. Ravens raided the sealed garbage bins in thick black masses, cawing contemptuously at the humans who tried to deny them their food. There were trees everywhere, and sand - fine beach sand, as good as any you'd find in California or Singapore. The rivers meandered through the woods; in a canoe, you could travel through tunnels made of trees, then emerge onto a pristine lake, dotted with mysterious islands, outcroppings of exposed black granite, often thick with moss and the ubiquitous conifers.

The stars were magnificent. The night was so black, it felt like you could see to the edge of the universe.

But what brought me back was the sinkhole.
Leaf Rapids, a teacher told me, was built on territory scarred by a receding glacier. The sinkhole was the most obvious evidence of the retreating ice age. It was a long, deep channel in the earth, very steep, a valley worn into the ground not by a river, but by ice.
I was mesmerized by the sinkhole. To get to it, I had to walk through the woods, perhaps a half-kilometre distant from our little townhouse, passing a huge pink boulder, no hint that soon the land would drop off suddenly, leaving you at the lip of what was very nearly a cliff.
But soon enough you were there, at the edge of the abyss, looking over the tops of the trees growing below you, on the sinkhole floor.
And then, carefully, you could journey downward, using the trees as handholds to keep from tumbling down the side of the hole. After a few minutes - though it seemed much longer - you would find yourself at the bottom, standing in a valley so narrow it felt like if your arms were just a little longer, you could reach out and touch both sides.

Looking up, the trees would tower above you, the sky just barely visible, a narrow strip of blue through the branches. Your feet would sink into the thick carpet of green-hued moss.

If you were alone, you might think of monsters. If you were with a friend, you might pretend to be Captain Kirk and Mister Spock, or one of the Fantastic Four. Or simply a cop or a robber.
The sinkhole was an engine of the imagination. When we left it behind, I was 10.
Last July, I decided that Sylvia needed to see it. And so we packed my little car full of supplies and headed northeast, bound for the edge of nowhere.
TO BE CONTINUED...
Posted by Earl J. Woods at 8:14 pm

Why do I get the feeling that Leaf Rapids is the favorite spring break destination of Miskatonic U.? There's almost a Lovecraftiness about all that nature.

And, well, you've hit upon one of my secret compulsive (nonpornograhic) hobbies, and that is to restore other people's photos without them ever asking. I used to be quite good at photo restorations, and a) it kind of gets under my skin when I see pics that need work, and b) it bothers me even more that I don't do it for a living. Anyway, if you want, here are links to the retouched photos.


Mostly they are easy fixes, as photos tend towards red over time. It's just a matter of compensating for that, and sharpening the old picture grain. The purple jacket with the yellow velour (yellow velour -- someone was certainly gunning for the center chair on the bridge from an early age!), well, that's more likely your parents' fault, and no amount of photo restoration could justify those colours. I tried my best without resorting to greyscale.

What in the Chinese Hell of Decapitation And Being Left For Dead is going on? It looks like your blog has maliciously and meticlulously cut off my links.

I will re-post them in "halves", but you're goingto have to re-connect the heads to the bodies, as it were.

While I'm commenting, I would like to point out that Earl most likely stole my cookie immediatley after the picture was taken.

Wow, that restoration is really quite good.

Again, this is EPS Sean.

This is one of my favorite posts. Earl is one the most beautiful little boy's that I have ever seen. Sean looks so precious with his cookie. They are both now all grown-up but those pictures are truly special. It was an honor to visit the place that nutured Earl's creative mind. Leaf Rapids does have a magical essence that has to be experienced in order to appreciate it.

Noticed this story about Leaf Rapids in the news this week — an interesting development!

It's been talked about for weeks and on Monday the northern Manitoba town of Leaf Rapids became the first municipality in Canada to ban plastic shopping bags.

Mayor Ed Cherrier said he doesn't expect any trouble enforcing the new bylaw in the town of about 550 people.

"Everybody's on board," he told CBC News. "Our Co-op store and Fields, they're really supporting our initiative. And in fact, our Co-op store has offered a challenge to all of Federated to go bag-free across Canada."

The transition started almost a year ago when the town imposed a levy on plastic shopping bags, Cherrier said.

Since September, very few one-time use plastic bags have been seen in Leaf Rapids, about 980 kilometres northeast of Winnipeg.

It's estimated that a traditional plastic bag takes 1,000 years to dissolve.

The new bylaw prevents retailers from selling or distributing the single-use bags. Ignoring the ban could result in a $1,000-a-day fine. In anticipation, officials have been handing out cloth shopping bags to residents.

John Roach, the assistant manager of the Co-op grocery store, told Canadian Press recently that customer feedback to the ban has been overwhelmingly positive. He said the store went through at least 2,000 plastic bags a week and the litter they created was an eyesore.

The ban idea is catching on.