The Bittersweet Joys of Joyland 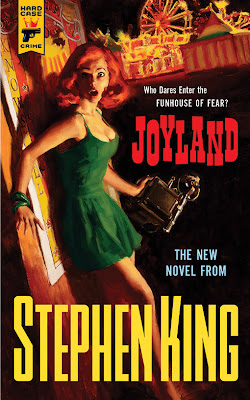 Like a lot of Stephen King fans, I prefer the man's earlier novels to his later works. Where books like Carrie, The Shining, The Dead Zone and the original cut of The Stand are fresh, taut and vivid, some of his later works seem bloated, directionless and indulgent by comparison. That's not the case with King's newest book, Joyland, a coming-of-age story disguised as an amusement park mystery thriller. It's a welcome return to form for King.

My generalization above regarding the quality of King's work over time is somewhat unfair. I've already written about my admiration for the recent Under the Dome and 11/22/63; both are very long, and yet they're more compelling than, say, books five and six of the Dark Tower series or (shudder) Dreamcatcher. But with Joyland, King's steady efforts to recapture the magic of his early works pay off handsomely; he's delivered a short, sweet mystery novel full of melancholy delights.

Released under the retro Hard Case Crime imprint, Joyland delivers all the requisite mystery cues, but at its heart - and this novel has a lot of heart - this is a story about a young man who loses his first puppy love and learns that the real thing is more wonderful and complicated than he ever imagined. This is a book about your first summer job and those vital friendships you develop during university and those sunny months between terms, when your future is as uncertain, terrifying and wondrous as it will ever be.

Devin Jones, the hero, is a fresh-faced young man with a good heart; an unassuming hero who harbours regrets but never becomes bitter or maudlin. He's the kind of kid you can't help but like, and when Jones suffers, so does the reader. We feel his heartache and savour his victories.  Gradually accepting that his first teenage love is unrequited, Devin takes a job as a labourer at an amusement park on the shoreline of the southern USA. He's a hard worker, good with kids, faithful to his friends - but everyone around him can see that he's hurting, and the carnival community rallies around him. It's a refreshingly honest and non-cynical view of the value of civilization.

Joyland is a sensitive novel, gentler than many of King's works. There's death here, but it usually occurs offstage; there's only one moment of gore, and it's not gratuitous but the logical payoff of an artfully constructed climax.

Carefully paced and fully realized, with a deeply moral hero and a genuinely moving coda, Joyland is King's best novel in a long, long time.
Posted by Earl J. Woods at 7:24 pm

Great review, Earl. I'll be adding this to the pile.

Having added this to the pile, and consumed it, I do have a couple of comments.

First, I thought that it was an amazing book, as much of a page-turner as any of his books. I'm not entirely sure if I like it as much as It or 11/22/63 but, like you said, it has a lot of heart.

On the other hand, I thought a few things happened with TV-Show-like coincidental timing. When the phone rang at the end, it made my phantom hair stand on end with the mystical, creepy portents. But it wasn't what I thought it was. And then Annie's timing at the end was a little too perfect. In the end, these were minor problems I had with the book and didn't take away from the fact that it was better than a lot of books I've read this year.