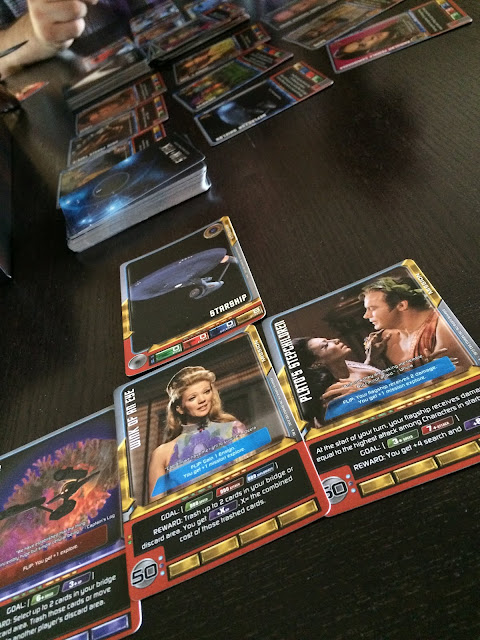 So that's what the cards look like when new. Enjoy your game, Captain!

I should add that this is Susan's and my favourite card game, and Steven's too (I assume) since he gets dragged into any number of games with us. We play the game as if we were TV executives working out the production line-up of the next season of Star Trek. The producer gets creative with casting, so sometimes we end up with episodes that were never made but should have been:

Khan beams down to Capella IV (Friday's Child) alone, carrying only a tricorder which he eventually breaks. He solves the Klingon crisis singlehandedly, but not diplomatically.

Christine Chapel, Janice Rand, Elizabeth Dehner, and Uhura defy the Captain's orders and leave him aboard the Enterprise solve The Savage Curtain. Each is armed with a phaser gun.

Abraham Lincoln and Kahless band together and solve many episodes as partners ("The Lincoln & Kahless Variety Hour"), proving that friendship overcomes enmity.

My favourites, though, are the Khan episodes. He's so ruthless on Federation personnel that often enough he has to rely on his own considerable resources to solve the episode. It's fun to imagine what Trek would have been like if Ricardo Montalban would have supplanted William Shatner as the star. Sort of a Fantasy Island in space, but with a lot more phaser burns.