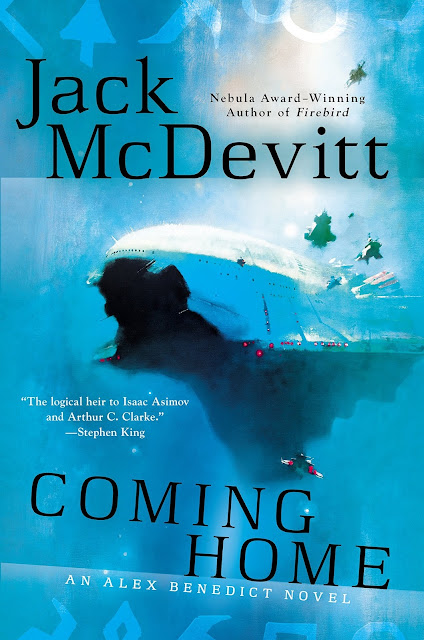 Jack McDevitt's two future histories portray stable interstellar societies that envision humanity at peace with itself and the universe around it. The Alex Benedict stories take place over 9,000 years from now, and people are comfortable, either living lives of leisure of pursuing employment if they feel like it. FTL travel is routine, and AIs are both helpful and personable. Some people create holographic avatars of themselves just in case relatives want to check in on them after death, though everyone involved knows these avatars are nothing more than sophisticated simulations.

Against this backdrop, Alex Benedict and his pilot Chase Kolpath search for artifacts of humanity's past, which they sell to private collectors. Their adventures typically involve chasing down particularly juicy pieces of history.

In Coming Home, the latest Benedict novel, there's an artifact and a cruise liner trapped in warp space, awaiting rescue. But what's most interesting about this book is McDevitt's world-building. In greater detail than ever before, the author fills in the blanks of his future history, and in doing so reveals that his characters are woefully ignorant of most of it, for the sheer weight of years has erased much of our legacy.

The people of the future know of Armstrong and Aldrin and the first moon landing. But the site itself lasted only a thousand years before a Dark Age lasting centuries resulted in panicked historians bringing what they could back to Earth for safekeeping, only to have it lost in society's centuries-long collapse.

Here's one passage that hints at what's been lost:

Alex thinks the worst disaster in the history of the human race occurred when the internet shut down, apparently without warning, early in the Fourth Millennium. "The breadth of the loss," he said, as we went in through the museum's front doors, "is best illustrated by the fact that we don't even know what disappeared."

The vast majority of books, histories, classic novels, philosophical texts, were simply gone. Most of the world's poetry vanished. Glimpses of Shelley and Housman and Schneider survived only in ancient love letters or diaries. Their work doesn't exist anymore. Just like almost every novel written before the thirty-eighth century. We hear references to the humor of James Thurber, but we have nothing to demonstrate it. Unfortunately, there was no equivalent this time to the monasteries that salvaged so much during the first dark age. Within a few generations of the electronic collapse, a few people knew Pericles was important, but hardly anyone knew why. And Mark Twain was only a name.

The Albertson Museum, apparently, had locked down its reputation when it recovered a copy of The Merry Wives of Windsor. That had given us a total of six Shakespearean plays.

They had a theater where you could watch one of the movies from Hollywood's early years. Hollywood was where they manufactured most of the films when the technology was just getting started. Only seven have survived from that era...If anyone's curious, they are High Noon, South Pacific, Beaches, Close Encounters of the Third Kind, Casablanca, Gentlemen Prefer Blondes, and Abbott and Costello Meet Frankenstein.

Tarzan swung through jungles in a series of books that, in their time, are supposed to have outsold everything except the Bible. The search to identify him - it's assumed he is a male - is still on.

Superman and Batman got their start, we think, during the twenty-fourth century. Except for a brief period during the Dark Age, they've never gone away.

It's clear from context that there are whole cities and even nations that the future has forgotten, though Canada still exists in a sense; indeed, Winnipeg is Earth's capital, and it's described as a beautiful place. But most of the sports my friends follow are gone, except for soccer. In the future they think Dracula was a famous physician known for extracting blood. They know there's an asteroid in the solar system named Spock, but they have no idea what the word signifies.

(There's a clever reference to McDevitt's Priscilla Hutchins novels, his other major future history: at least one of those novels survives, and Chase Kolpath muses that she liked the main character. So in the Alex Benedict universe, the Priscilla Hutchins universe is fictional.)

As a lover of culture, I found the book pretty harrowing. What price Utopia? Apparently, most of our good works. And yet I can't deny that McDevitt's future seems all too plausible. Hang on to your paperbacks and photo prints.