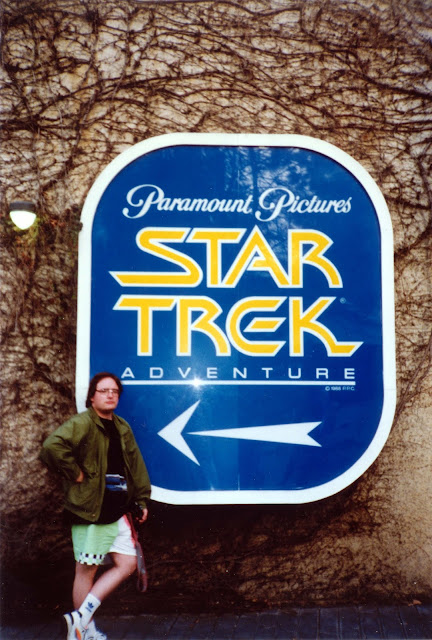 By the time I was born, Star Trek's initial broadcast run was almost over; indeed, only "The Cloud Minders," "The Savage Curtain," "All Our Yesterdays," and "Turnabout Intruder" aired in first-run during my lifetime. Barely a month after that last episode ended, Neil Armstrong and Buzz Aldrin were exploring the Moon.

I learned to read fairly early, and I read voraciously. I don't regret it, but there were two unfortunate side effects: being a reader made me something of an outcast among my peers, and many of the non-fiction books I devoured filled me with existential dread. I was particularly concerned by the prospect of nuclear war. I was a pretty neurotic, imaginative little boy, and I was bullied for it repeatedly for many years.

But one afternoon, when I was perhaps five or six years old, I tuned in to CBC and saw my first episode of Star Trek: "A Private Little War." At that age I was drawn, of course, to the action/adventure aspect of the show, and to the fearsome mugato that threatened Captain Kirk and Doctor McCoy. But though I may not have consciously realized it at the time, what really grabbed me  was that the crew's adventures took place in the far future, hundreds of years from now. More importantly, people got along - people from a bunch of different countries served on the Enterprise together. They were professional, they were kind, and when they used violence they did so with real reluctance and regret.

I didn't glean all this from that single episode, of course; it was revealed to me as I devotedly tuned in for the repeats. Soon I was playing "Star Trek" with my few friends in the forests of Leaf Rapids; one of us, I don't remember which, had the "Exploration Set" model kit, so we had a plastic phaser, communicator and tricorder to use as props. And the amazing topography of Leaf Rapids, with its dense thickets of trees, the sinkhole, beach sand (!) and outcroppings of massive boulders, served us well as a variety of alien worlds. It didn't stop the bullying or my sense of isolation (in fact, in some ways it made it worse), but the show and the feelings it inspired made it all much easier to bear.

I kept watching the repeats even after we moved from Manitoba to Alberta, all the way up to the debut of Star Trek: The Next Generation in 1987. I read the books, I wrote Star Trek stories, I watched the Animated Series, and I even joined the University of Alberta Star Trek club and had a custom uniform made: 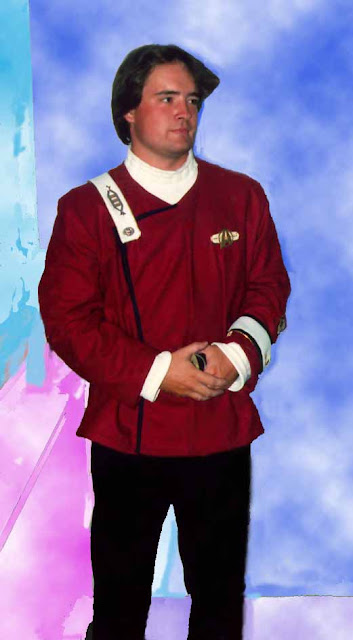 It's no exaggeration to say that next to my parents and Superman comics, Star Trek played the greatest role in shaping my values. I fell in love with its lofty aspirations: to peacefully explore the universe, to expand our knowledge, to learn about and genuinely appreciate and love other cultures, to treat every living thing with dignity, compassion and respect. And while it's true that the show was often inconsistent in its efforts to fulfill these aspirations, millions of people around the world got the message: we have a future, it's marvellous and beautiful, and we'll explore it together. No one gets left behind.

Of course I understand it's just a television show. But there's a beautiful moment in the Star Trek parody film Galaxy Quest that perfectly captures my relationship with the series: a fan acknowledges the television show Galaxy Quest isn't real, and then is told that (in a sense) it is real. "I KNEW IT!" he exults.

I wish Star Trek were real, and I know it's not real, but I know it is real, in a sense. Maybe Star Trek itself is just a fantasy, but the ideals that serve as its foundation are real and important and worth pursuing.

To celebrate my love of the show on its 50th anniversary, which just happens to be today, I watched "The Man Trap," the first episode broadcast. While not the best the series has to offer, it still felt as fresh and intriguing to me tonight as it did when I first watched it, sometime back in the 1970s. And even in what feels more like an Outer Limits "monster of the week" episode than the Trek people know and love, those Star Trek values remain very much in evidence. Even after the M-113 creature has killed five people, necessitating a lethal response from the crew, Kirk and company show palpable regret in the coda.

Star Trek's secular testament has informed my character every year I've been conscious, and I expect it will continue to do so for the rest of my remaining years. Maybe I'll never fly on a starship for real, and maybe I'll never live up to the show's ideals, but I think trying has served me well so far. I'm grateful for the journey. Happy Anniversary, Star Trek, and thank you to the hundreds of men and women who gave the world such incredible stories of hope, imagination and possibility.

Very well written, Earl! I agree with your sentiments that the ideals of Star Trek are what has endeared me to the show. Living and working with other people, without regard where they are from, or how they look is inspiring and not portrayed enough in media. The first time I watched Star Trek, it was the animated series and I remember telling my brother that if I were on the Enterprise I would be too afraid to leave! My life changed because of Star Trek was when I started university. I began mid-semester and was overwhelmed and lonely because I had been in an extremely small high school. Going from 40 people in the entire grade to 400 people in one class was a big jump. I decided to join clubs on campus, and found great people and ideals in the Star Trek club. I found a home with the people that shared ideals of friendship, creativity and a bright future. It will always mean a lot to me.

Thanks, Susan! You make some excellent points. My life would have been much the poorer if I hadn't met friends like you through the U of A Star Trek Club.