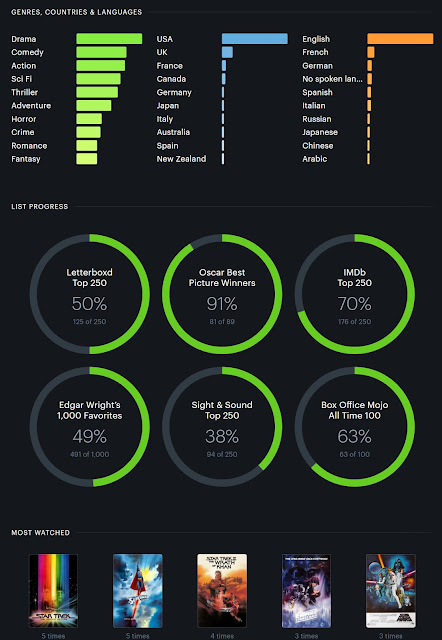 A few days ago, I wrote about my Letterboxd Pro subscription and the cool stats it generates about my film-viewing habits. This is another set of my Letterboxd data: my genre, country of origin, and language breakdown, my progress on some notable lists, and my most-watched films, which comes with a huge caveat I'll explain below.

Friends of mine might be surprised that science fiction isn't at the top of my genre list, and indeed I'm surprised that it manages to rank only fourth. However, I don't know how Letterboxd assigns genres to films - there could very well be a number of films I would call miscategorized - and given my proclivity for attempting to watch all the films of certain directors like Hitchcock and Chaplin, who produced very little SFnal content, the results start to make a little more sense.

I seem to be doing pretty well on most of the lists Letterboxd deems important, though I clearly need to catch up with Sight & Sound's top 250, one of the most important of the film crit lists. I'd never heard of Edgar Wright's 1,000 favourites before these statistics were generated, but apparently I've seen nearly half of his choices.

The "Most Watched" list is only as good as the data any given user inputs, and even I'm not crazy enough to log every single instance of every film I've ever watched. I'll log re-watches now, of course, but I've resisted the temptation to go back and try to reconstruct every single time I watched Star Wars, for example.

The five films you see on this list are there because once I saw the data was being generated, I figured I may as well try to nudge it in a reasonably accurate direction. For example, I know I've seen Star Trek: The Motion Picture:

Of course I watched the VHS tape many times in the 80s, and I've seen the DVDs more than once. The same is true for the other films in this section. But trying to reconstruct this particular movie ephemera is hardly worth the effort.
Posted by Earl J. Woods at 6:29 pm