The Stars in My Eyes 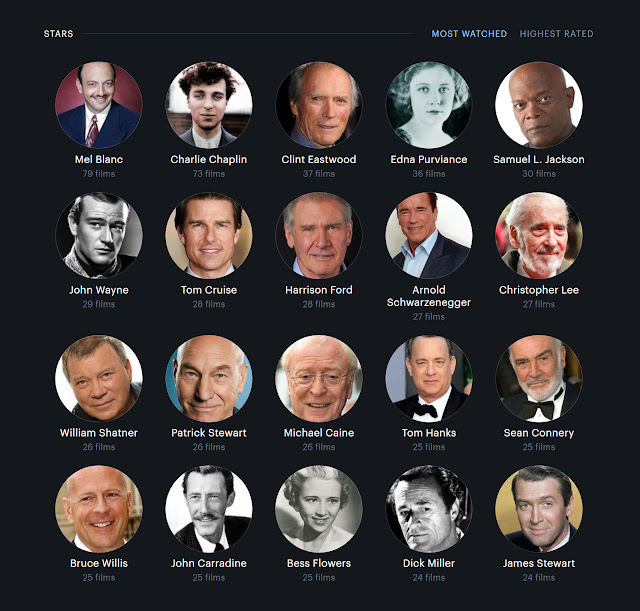 Letterboxd Pro tracks the films I watch, and from that database it's generated a list of my most-watched actors. I'm dismayed that there are only two women and one actor of colour on the list, but I'm unsurprised by the rest of the tally, save perhaps for the inclusion of Dick Miller, who as it turns out was in a bunch of 80s genre films I've seen. (In fact, I've actually seen 25 of his films - reviewing his list of credits reveals that I forgot to log InnerSpace, which I saw in theatres way back in 1987. It's these haphazard connections that have helped me make my Letterboxd inventory more accurate as time goes by.)

I didn't recognize Bess Flowers when Letterboxd first generated this list. As it turns out, she's one of Hollywood's most prolific actresses, appearing in over 700 films, including 23 Best Picture nominees, five of which won the award. Bess probably appears on a lot of Most Watched Stars list for this reason - if you're a film fan, it seems you can hardly avoid her.
Posted by Earl J. Woods at 6:32 pm

Dick Miller is to Joe Dante what Sam Jackson is to Tarantino. Loved him in Matinee!