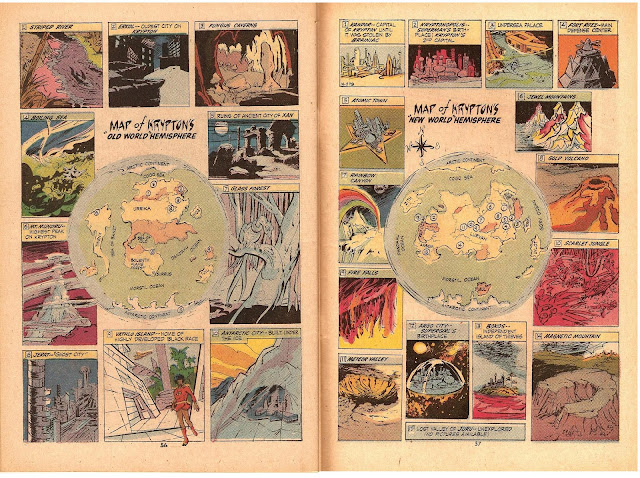 A few days ago, Jeff Shyluk and I were poring over maps of Krypton as part of a project we've been discussing. I came across this old map of Krypton, and we exchanged some wry, sad commentary about "Vathlo Island--Home of Highly Developed Black Race."

I believe the creators of this map were trying to be inclusive, but instead the text comes off as both condescending and segregationist. But more importantly, the map caused me to look back at my own reading of the various Superman comics over the last five decades. Here's what I wrote to Jeff, in part:

"It makes you wonder what happened to the Kryptonian East Asians, Indigenous peoples, South Asians, etc. You know, over the years I have read nearly every issue of Superman, Action Comics, Justice League of America, World's Finest, Superman Family, Supergirl, Super-Team Family, DC Comics Presents, The Legion of Super-Heroes, Adventure Comics, Super-Sons, Superman's Girlfriend Lois Lane, Superman's Pal Jimmy Olsen, Superwoman, Superman Confidential, and the various one-shots, miniseries, and novels that make up the Superman canon. And in all those hundreds of comics and stories, I can think of only one non-white Kryptonian, Val-Zod, and he didn't show up until 2011, plus he's from a parallel Krypton, no less (from the universe of Earth-2, which I guess means he's from Krypton-2, though not the same Krypton-2 that birthed the original Golden Age Superman...never mind, comic book continuity is utterly ridiculous).

It's possible that there may have been non-white Kryptonians depicted in background scenes during flashbacks to Krypton pre-cataclysm, or maybe we might have seen a black or Asian Kryptonian in the bottle city of Kandor. But wow, until this email I had honestly never even considered the crazy fact that Krypton, aside from that one map reference and the very recent Val-Zod introduction, has been portrayed as an entirely white culture. WOW. That is bananas."

Naturally I don't remember every single panel of the literally thousands of comic books I've read that feature Superman; it's quite possible that some stories do indeed feature non-white Kryptonians. But aside from the above map reference and latecomer Val-Zod, I can't think of any Kryptonians of colour other than white. I'd love for other Superman and comic art fans to tell me differently...

Edited to add: Thanks to Mike Totman for digging up this 2009 story that reveals there have indeed been some non-white Kryptonians featured in the recent past.
Posted by Earl J. Woods at 10:46 am