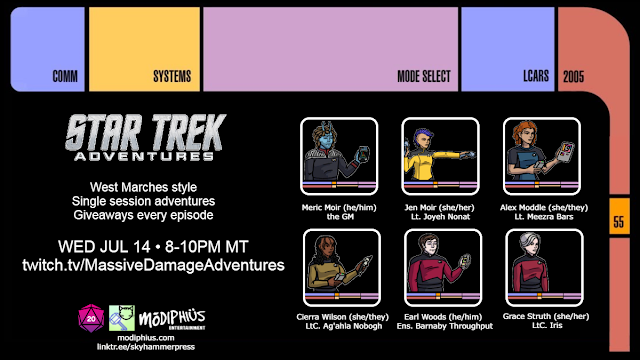 My friend Meric Moir has been running tabletop and virtual roleplaying adventures for years now, and I'm very excited to be part of his crew this Wednesday, July 14, partaking for the first time in the Star Trek Adventures system by Modiphius. The two-hour single-shot adventure will be broadcast live at  twitch.tv/MassiveDamageAdventures starting at 8 PM MT.

What's a twitch stream? It's like watching a television show focused on a handful of real people playing a game. Sometimes they're playing a board game, sometimes they're playing a video game, and in this case, we're playing a roleplaying game. I'm playing the role of fresh-faced young Ensign Barnaby Meme Throughput, the flight officer (pilot) of the USS Artemis. Who knows what new worlds the Artemis will encounter? Find out Wednesday night, and as added incentive, you could WIN your share of $500 in gaming giveaways.

You've somehow managed to schedule this directly upon the footprint of the first social interaction I've got planned in a year and a half. Now I must choose: virtual real friend or real real friend. Either I bogart my buddy's wifi at his place and yell "fnord!' or "gwats!" into the device every few minutes to simulate my online presence, or else I beg you to transpose the proceedings into a Lower Decks style screenplay. No Discovery-universe Burn, please, and all Picards must wear hats and trenchcoats, as they were meant to.

No worries, Jeff, the stream will be archived! Meet your real real friend!