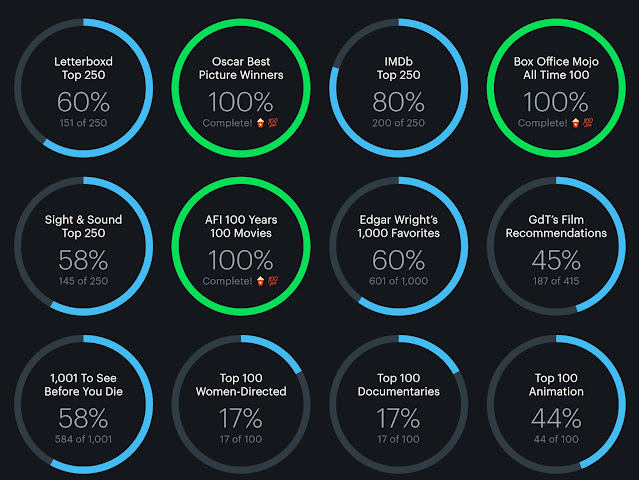 In my quest to watch every movie ever made, I'm naturally devoting a lot of my time to tracking down the greats. If I don't live long enough to see every film, I'm at least going to try seeing the most acclaimed. Lists aren't infallible or unbiased, and they'll inevitably miss many great works, but they serve as an excellent starting point. Above, you can see where I stood as of last March in terms of completing twelve of the "best-of" lists selected by Letterboxd. 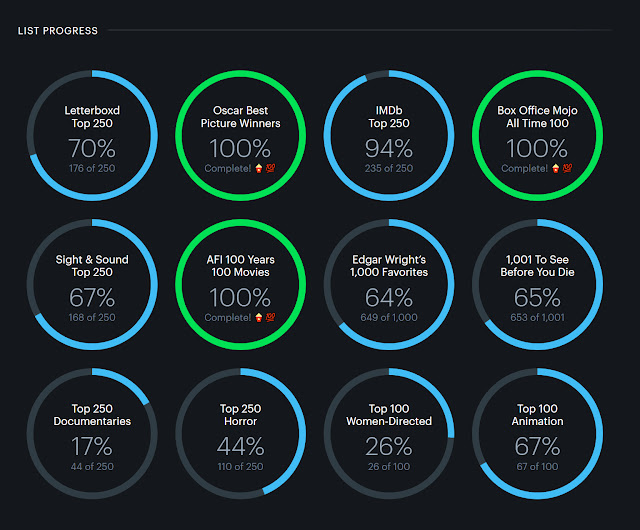 Here's where I stand now. Note that Guillermo del Toro's Film Recommendations has been replaced by Top 250 Horror. For the record, I'm now at 51% of the del Toro list. The Top 100 Documentaries is now the Top 250 Documentaries; amusingly, despite watching a bunch of documentaries since last March, my percentage complete remains exactly the same.

As you can see, I'm tantalizingly close to finishing off the IMDb Top 250--just 15 more movies to go, including big titles such as Wall-E and Requiem for a Dream and lesser-known works such as The Secret in Their Eyes and Jai Bhim.

I'm off to a good start with the Top 250 Horror list, which comes as no surprise since I'm a fan of the genre. I've made quite a bit of progress on the Top 100 Animation List, discovering incredible works like Perfect Blue and Waltz with Bashir alongside the formulaic Disney stuff that gets more and more grating as I grow older and more cynical.
For Sama is a heart-wrenching documentary about the civil war in Syria that appears on a couple of these lists. The first time I tried to watch it, I had to stop about ten minutes into the film because it was wreaking emotional havoc on me. I came back to it about a month later and managed to finish, and I'm glad I did. It's brutal, courageous, honest, and moving, and it's also an important historical document. It's on Amazon Prime--don't miss it.
Posted by Earl J. Woods at 3:04 pm

Presumably at least a few of those lists (IMDb especially) change as new movies are released and ratings change. Are you keeping up with that?

Yes indeed! For example, the Box Office Mojo list changes pretty frequently, so sometimes I have to seek out a film that bumps me down from 100% to 99% or 98% or whatever. As of yesterday, though, I was at 100%. The AFI list is, I believe, static, but as you note, the IMDb list changes and my percent complete fluctuates as movies join and fall off the list. Sight and Sound changes their top 250 every few years, the Letterboxd 250 changes per the whims of Letterboxd users, etc. 1,001 Movies You Must See Before You Die gets updated every few years, too. But I don't go back and try to see all 1,001 Movies 1998 edition or Sight and Sound 250 2005 edition, etc.