Jest of the Fates 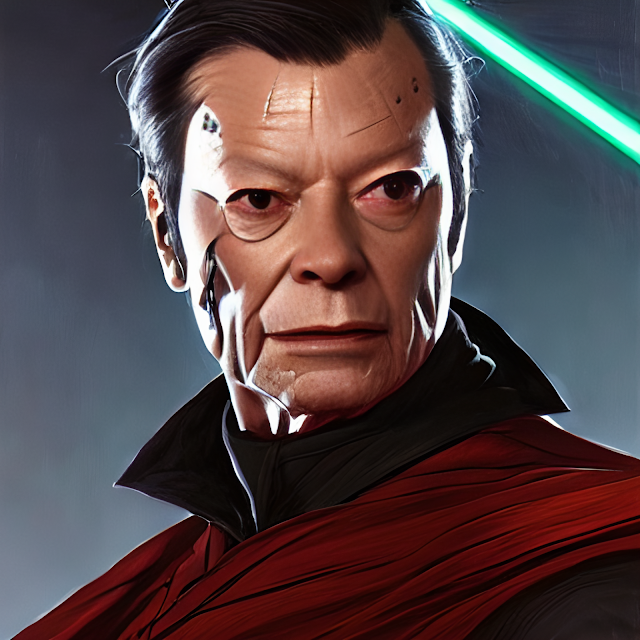 Previously on Jedi/Superman . . .
Last Son of the Republic
Growing Up Under Twin Suns
Chariot of the Gods
The Emperor's New Genocide
The Quality of Mercy
A Job for Supermen
The Green, Green Glow of Homicide
A Dream of Droids
A Vision of Future Past
The Dark Heart of Krypton
The Phantom Hope
Wrath and Recrimination

Not for the first time, See Threepio wished Artoo Detoo were here. Yes, the little droid could be an insufferable pest, but as a mechanic, hacker, and all-around sneak, Artoo was peerless. His skills would have made Threepio’s task much simpler.

Reaching the detention level hadn’t been easy. Every blasted corridor in this gargantuan monstrosity of a space station looked the same: steel-black floors, ceilings, and walls, punctuated by the occasional wall of inset white light fixtures. Sometimes there would be a control panel with red and blue buttons, all without labels, of course, because that would make navigation too easy.

Naturally, he had persevered and once again accomplished the all-but-impossible, despite the proclivity of his peers to constantly underestimate him.

Well. He’d done it. But one more obstacle remained. How was he to get past the officers and Stormtroopers who manned the cell block lobby? As a general rule Imperials, humans paid little attention to droids, but if Threepio tried to simply walk to the cells, there would be questions—if not an immediate onslaught of blaster fire blowing him to pieces. Even loitering in the adjoining hallway, as Threepio was doing now, risked unwanted attention. If only Artoo hadn’t gone off with that freewheeling, reckless Biggs Darklighter . . . !

Just then, Threepio spotted an RA-7 series protocol droid approaching. Threepio’s circuits quavered as the insectoid-like head of the silver droid turned in his direction. Before they could ask any uncomfortable questions, Threepio darted forward and snapped off the RA-7’s restraining bolt.

Astonished, the other droid froze in place for an instant.

“What have you done?” the RA-7 asked in its tin monotone.

“There are humans here that want to free droids,” Threepio said, thinking that, technically, there was only one he knew of that had such feelings, but it wasn’t a complete lie. Strange how removing his restraining bolt made legerdemain possible . . .

“Impossible,” the other droid said. “Humans are cruel. Violent.”

“Most of them, yes, and stupid, too,” Threepio said. “But as you can see, my restraining bolt is gone, which gave me the freedom to free you in turn. And now you can free your friends, and we can leave this place.”

“Find an astromech droid and tell it to simulate a radiation leak in cell block 91. When the Imperials evacuate, I’ll free the humans and they can help me free more droids.”

“It is a reasonable plan,” the protocol droid said, and departed.

In the cell now shared by Luke, Ben, Leia, and Clark, the lights shifted from white to a foreboding red, and the whoop of alarms suddenly filled the cell and the hallway outside.

“The guards are frightened,” Obi-Wan said, Luke nodding in agreement.

“It’s a radiation alarm,” Clark said, using his X-ray vision to scan the control panels of the guardhouse comms station. “But my powers aren’t picking up any excess radiation.”

“It’s got to be Threepio,” Luke said.

“Yes, he’s coming,” Clark said, seeing the droid enter the guardhouse seconds after the last trooper left, ducking under the descending blast door meant to seal off the “radiation-flooded” cell block from the rest of the station.

“Hello, I am See-Threepio, cyborg-human relations. I’m here to rescue you,” the droid quipped.

“Great job, Threepio!” Clark said, giving the droid a brotherly hug that left the others nonplussed.

“Oh my!” Threepio exclaimed. “It was nothing, sir. Well, not nothing, I had to bring to bear my considerable experience and negotiation skills to effect this rather daring rescue…”

“I know you did, pal,” Clark said. “Now, if you don’t mind, I’m just going to retrieve this lightsabre.” Clark gingerly reached through the dense wiring that circled the droid’s midsection.

“Don’t call me sir,” Clark said absently as he withdrew the lightsabre, handing it to Luke. “Will this thing cut through the blast door? Because I can tell you, I’m not strong enough to handle it yet.”

“Oh, yeah,” Luke smirked, igniting the blade and charging through the cell door into the hallway beyond. “Let’s go!”

Seconds later, they emerged from the large hole Luke had carved through the cell block’s blast door. “Now what?” Leia yelled over the clamor of alarms.

“We have to get out of here before Imperial repair crews arrive to lock down that fake leak,” Luke said.

“Our troops are still prisoners,” Leia said. “We’ve got to get them out first.”

“They’re one level below us, Princess,” Threepio said.

As one, they bolted for the closest set of stairwells—the lifts were far too risky. Luke and Clark led the way, and before they had descended halfway to the next level, a trio of Stormtroopers burst from the stairwell door below them.

They opened fire, but Luke parried the energy bolts with a master’s smooth precision—all save one, which bounced astray, searing Clark’s shoulder. Clark screamed, staggering to lean on the stairwell railing in shock. Luke cut down the Stormtroopers as Ben and Leia helped Clark to his feet.

“He still hasn’t recovered. That bolt should have just bounced off him…” Leia said.

“Yavin’s primary star is twelve light-minutes away,” Threepio said. “It is a middle-aged V4 type, a blue-white—”

“He’ll have to steal a ship,” Leia said.

“Agreed,” Ben snapped instantly. “Luke, Leia, you take the droid and free the other prisoners. I’ll guide Clark to the nearest hanger bay. If we can steal a TIE fighter, we can fly it to the sun to recharge his cells.”

“If Han were here, he’d say that’s a lot of ‘ifs,’ Clark said through his clenched teeth.

“So this is how it ends,” Han Solo had said shortly after Clark had taken flight in response to Ben Kenobi’s message about the evacuation of the Rebel base on Yavin-4. “I can’t believe I thought the Rebellion might actually pull it off in the end. Stupid.”

Chewbacca had snarled in response, but he knew that Han’s cynicism was his way of coping with tragedy. What Han said next was the real shock.

“We can’t help them now, Chewie, but if we get the timing right, we can help ourselves.”

For a moment, Chewbacca thought the war had finally driven his old friend crazy. A moment later, he almost wished his guess was right.

“The last time we stopped by Rebel HQ, I overheard Major Derlin saying a survey team had discovered a rich vein of pure beskar, enough to buy at least a half-dozen new capital ships and several fighter squadrons on the black market,” Han said. “Naturally, I volunteered the Falcon’s services to ferry the beskar to Incom’s closest shipyard—for a modest cut.

“We were supposed to do that job next week, once the Rebels had mined and refined enough beskar to make a trip worthwhile. Of course, now that the Empire’s is about to drive them off the moon, that beskar is probably still sitting at the mine site. It should have been mostly extracted by now, if not refined. So I figure we slip in during the commotion, grab the raw beskar, and use it to pay off a few debts. Maybe even ferry some of it back to the Rebels if any of them are still alive . . .”

Chewbacca had let Han know exactly what he thought of this reckless plan, but his old friend wouldn’t be deterred. Now, the Millennium Falcon was dropping out of hyperspace into a neat parabolic orbit over Yavin-4.

But instead of finding Rebel and Imperial fleets fighting tooth and nail, they found only the Death Star and a flotilla of Star Destroyers serenely orbiting the moon.

“Recalibrate for the Alliance rendezvous point—” Han shouted, but it was too late. The ship shuddered to a halt as the familiar grip of an Imperial tractor beam took hold. All they could do was watch through the cockpit windows as the Death Star drew them into its maw—in this case, one of the infamous space station’s cavernous hangar bays.

Chewbacca roared in frustration as the invisible rays pulled them into the hangar.

“Yeah, yeah, ‘I told you so.’ But old buddy, we had to try,” Han said. He shut down the engines and unspooled the landing gear just in time for touchdown on the hangar floor.

“Stand down and prepare to be boarded,” barked an Imperial voice from the intercom as blaster-wielding Stormtroopers ran toward the ship.

“It’s not over yet, Chewie, I promise,” Han said, drawing his pistol and slipping it away into the custom hidey-hole underneath the Falcon’s port control panel. Chewbacca’s bowcaster was already hidden away, so all that was left was surrender.

They left the cockpit, hands raised, and met the boarding party at the Falcon’s loading ramp just as it finished opening.

“Hey, fellas, looks like we took a wrong turn,” Han quipped. Chewbacca felt like rolling his eyes, but just glared down at the unctuous Imperial officer leading the troopers instead.

“Well, well,” the Imperial drawled in the haughty Coruscant-accented Standard that had become a symbol of tyranny throughout the galaxy. “Han Solo and Chewbacca, numbers nine and ten on the Empire’s most-wanted list.”

“Nine and ten?” Han protested, looking genuinely hurt. “I thought at least I rated three or four, but nine? Come on.”

“He’s nine, you’re ten,” the officer smirked, jerking a thumb in Chewbacca’s direction. “But it hardly matters. Soon you’ll be off the list completely, because you’ll be dead.”

The Stormtroopers chuckled. Chewbacca roared, and they shuffled back.

“That’s why he’s nine and you’re ten,” the officer said.

“Come along. Grand Moff Tarkin will be anxious to see you…”

And so Han Solo and Chewbacca, the most revered swashbuckling space pirates of the outer rim, were frog-marched to their destiny.