The Last Photo of Dad 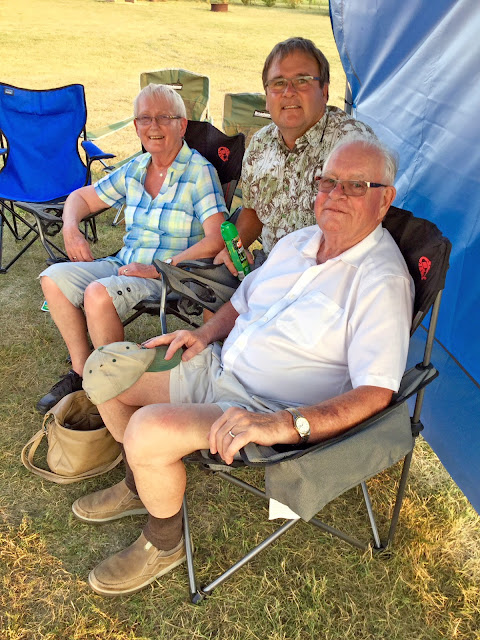 Dad died four years ago today. This is the last photo in which he appears, at least that I'm aware of; one of my cousins or aunts or uncles on Mom's side must have taken it, sent it to Mom, who then must have sent it to me. Or maybe my cousin David (seen here between Mom and Dad) sent it.

The saddest thing about photos of loved ones is that one such photo will be the last, and you likely won't even know it for a while. This photo was shot near Salt Lake, Manitoba, on August 11, 2018. While this was happening, Sylvia and I were with her parents at a dinner theatre show in West Edmonton Mall. A little over a month later, Sylvia and I left the car in Leduc with Mom and Dad just before we flew to New York. Dad's colour was off that day, but at the time we didn't understand the significance of it.

Just before we returned, Dad was diagnosed with pancreatic cancer. He was gone a few weeks later. At the time, I honestly thought he was going to be okay; I think maybe my brain wasn't allowing any other possibility.  Even when the doctors had to call off the operation that had a chance to save him, I thought they would just try again another day. They didn't; they couldn't.

So Dad moved on, and all of us miss him. He was a good man. I wish he was still here; for our sake, sure, but more because Dad was still enjoying life and I feel like he had more he wanted to do.

That is a fine picture.

Without a doubt, Bob Woods was proud of you and Sean. From what I know of him, I think you're right: he wanted to do more. But I do remember thinking of him as a man who was happy with his accomplishments as well, especially when it came to family. I am sure his wishes were for your happiness and prosperity. The past few years have been rough. That you have done so much good through this time would be the one thing that would make his smile the very happiest possible. That, and and another spin in the Cessna.