Sean Versus the Arena Deal 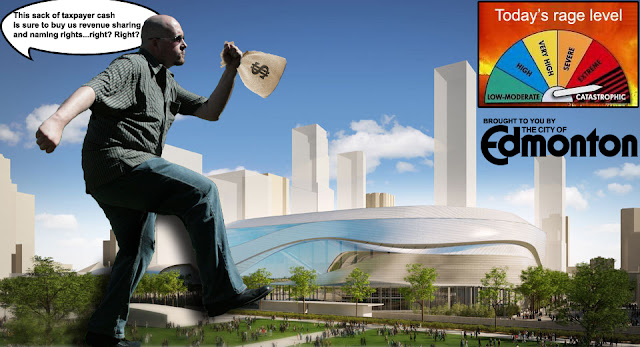 While this looks like a political cartoon on the surface, my real goal today was to practise using Photoshop layers for more realistic effects. In this case, I made Sean's lower legs a separate layer so I could use blending options to add shadows to the background without casting a whole-body shadow over the sky, which would of course ruin the illusion. I also had to make a new layer for Sean's fist in order to make him look like he's clutching the sack of cash. I'll be the first to admit that both efforts are a little clumsy, but remember my caveat: as a graphic designer, I make a pretty good writer. I borrowed the rage graphic at the upper right from Sean himself.

Edmontonians who follow municipal politics will know that this image is a barb at the ongoing saga of the proposed deal to build a new arena for the local hockey team, a deal many Edmontonians feel is flawed because it uses taxpayer money to help fund the activities of a professional sports franchise. I learned from Sean that at one point the deal would have given the City of Edmonton some perks in exchange for taxpayer funding, perks such as the right to name the stadium and a share of the revenues brought into the building. This seems pretty reasonable to me, but apparently those perks are now off the table and there's still some question of where all the taxpayer money will come from, hence the catastrophic rage level seen here.

Please note that Sean himself isn't responsible for this image, nor am I necessarily correctly interpreting his attitudes regarding the arena development deal.
Posted by Earl J. Woods at 5:12 pm

To be fair, I'm not sure naming rights were ever 'officially' on the table for the city. (Though they should have been.)

Regarding the shared revenue, an earlier draft of the framework gave the city four (might have been five) weeks of arena use. During those weeks, the city would get the revenue.

For whatever reason, this was taken out. Also, the city has agreed to pay the Katz Group (or should I say his shell corporation, "Edmonton Arena Corporation") $2mm per year to 'promote the City of Edmonton." You know, b/c people won't understand that the Edmonton Oilers are from Edmonton.

It's ridiculous. I believe the city is also responsible for major maintenance, too. Great.

There are many more terrible aspects of the deal, which I am to angry to get into at the moment.